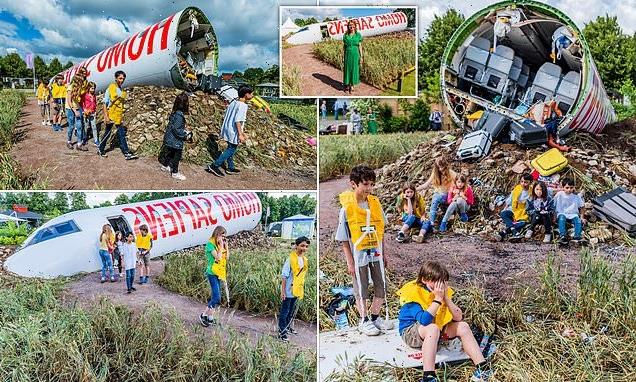 Hampton Court Flower show has opened today featuring an exhibit where a group of crying children emerge from a crashed plane – with barely a bloom in sight.

The unusual display is at the traditional flower show, which is set in the grounds of Henry VIII’s opulent Tudor palace.

It has been brought in to feature at the event to protest at the exploitation of our planet’s resources.

The schoolchildren emerged wearing deflated lifejackets from the smoking wreckage of a recently crashed plane, emblazoned with the words Homo Sapiens, blinking into a wrecked landscape.

A spokesman for the Royal Horticultural Society, which is organises the show, said: ‘Like the primordial planting on the garden, they too are survivors – the new generation who will emerge from this threat extinction and change the way we live to save our planet.’

Rose, one of the children featured in the garden, said: ‘In school, we talk about climate change and how it is destroying our world.’ 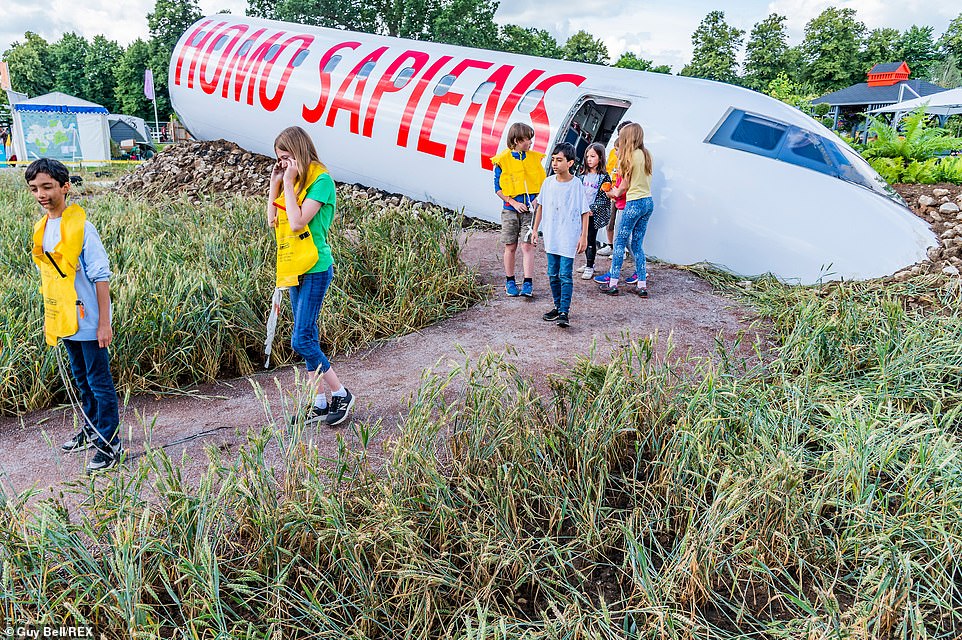 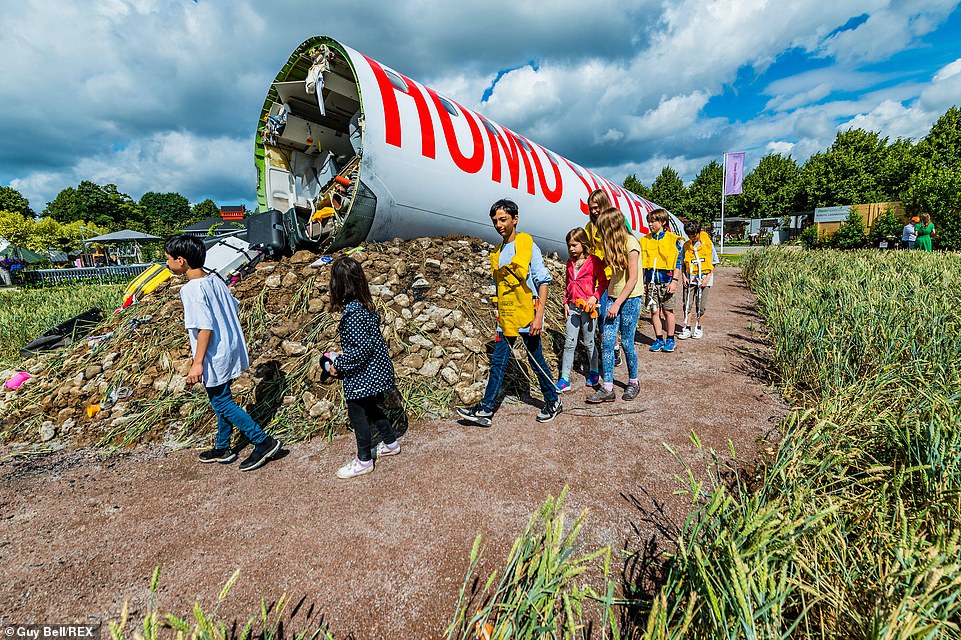 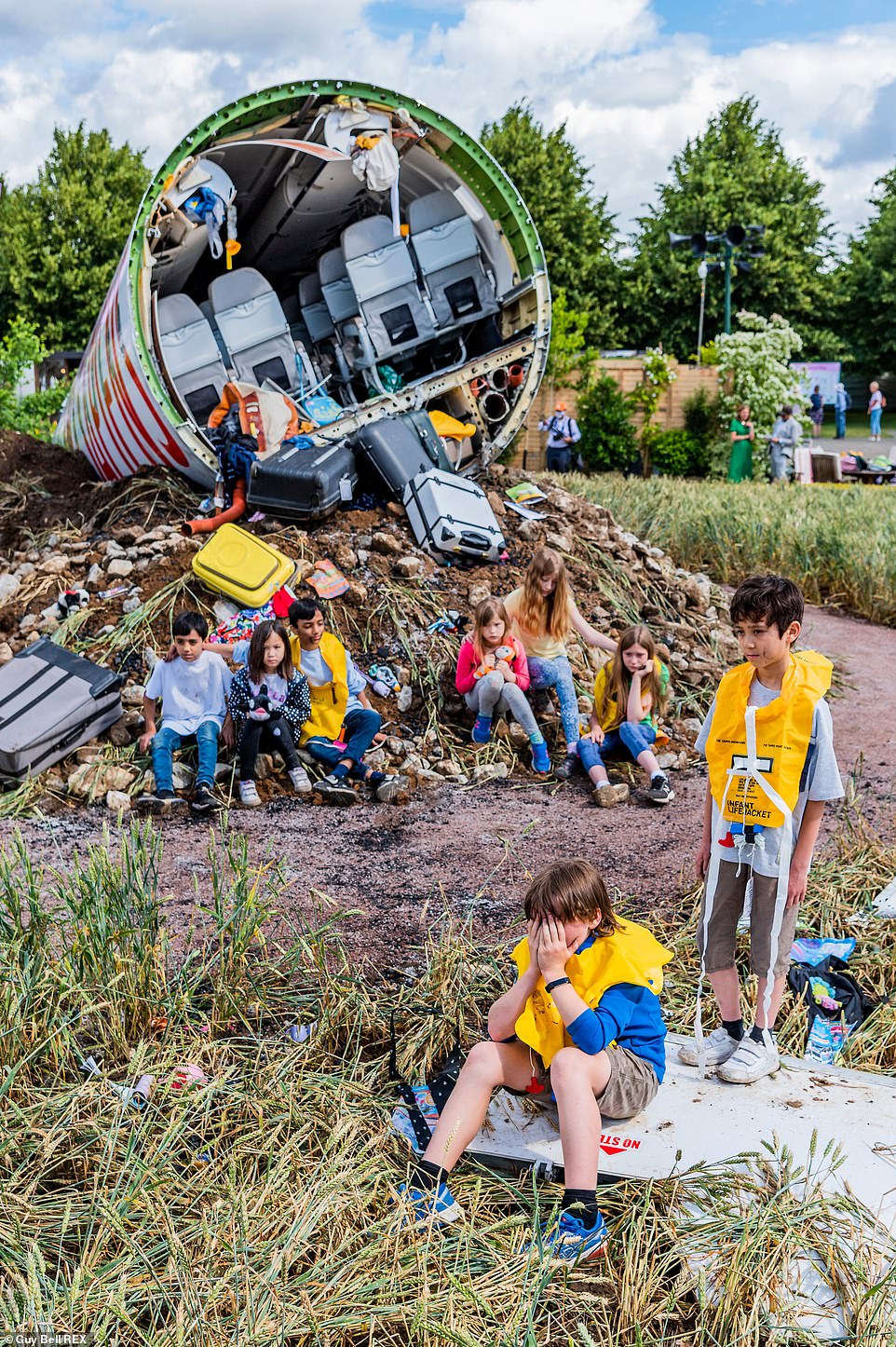 The exhibit is said to addresses the 6th Mass Extinction threat to Earth, caused by exploitation and destruction of resources

The eight-year-old added: ‘We know we need everyone to change and we believe that everyone can make a difference by growing more plants to help fight pollution and feed bees and make things better.

‘We want everyone to help save our planet by doing good gardening and growing more plants.’

RHS Director of Science, Alistair Griffiths said: ‘Fundamentally, the Garden for a Green Future, is to inspire and educate gardeners to adapt their outdoor space for the future.

‘Our RHS scientists have been involved in its creation, sharing their knowledge on using water sustainability, the importance of peat-free and how we need to grow different plants as we adapt to a changing climate and try to do more to mitigate this crisis.’ 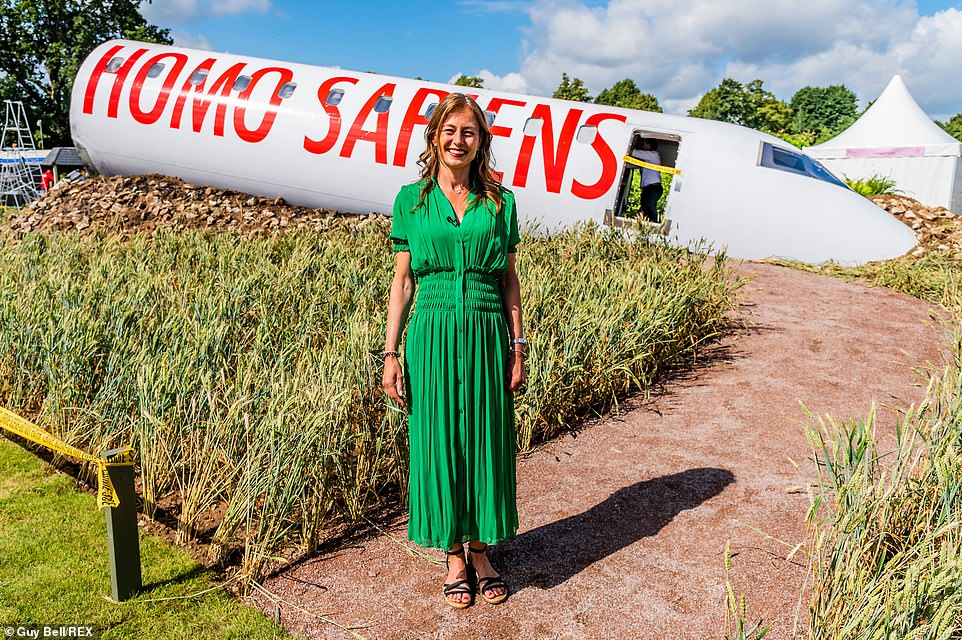 The week-long flower show in Surrey, which opened for a preview today also features other gardens dedicated to sustainability.

Among visitors were the winner of last year’s Strictly Come Dancing, comedian Bill Bailey and his wife.

One garden, called the RHS Garden For a Green Future and designed by Jamie Butterworth, is a demonstration of how British gardening could adapt to and embrace climate change.

A spokesman for the RHS said: ‘The future of the quintessentially British garden is changing, and this space aims to encourage people to adjust and improve their approach to gardening within a changing climate.

‘These are broken up with dry river beds that are full of water during winter flooding, but in July are mostly dry, arid areas where only cobbles, shingle, pebbles and self-sown flowers subsist.