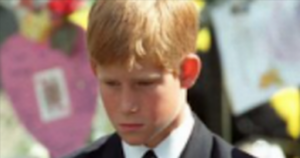 Harry has revealed tonight that he half-convinced himself his mother Diana was in hiding after her tragic death.

The Prince hauntingly told Tom Bradby on the ITN programme Harry: The Interview that he would see his mum in his dreams and would call out "mummy, mummy, is that you?"

Bradby said: "One of the things that really surprised me in the book is the way you talk about genuinely appearing to have half-convinced yourself that your mother was in fact still alive and in hiding."

The Prince also spoke candidly about the grieving process saying that it was strange how both he and William were not allowed to show any emotion after Diana's death, and yet crowds of weeping mourners were shaking hands with them both in the days that followed.

"I cried once at the burial," he said. "And I go into detail about talking how strange it was walking around the outside of Kensington Palace and the 50,000 bouquets of flowers to our mother. And there we were shaking people's hands."

In the latest interview released to coincide with the release of his new memoir Spare, the Prince also revealed he had lost a lot of memories prior to the death of his mother.

Asked whether the book begins with the death of Diana because Harry has a problem with memories, the Duke of Sussex replied: "Yeah. I lost a lot of memories on the other side of this mental wall. Um, which again, I think is so relatable for so many people who've experienced loss, especially as a youngster…

"I think a lot of it was a defence mechanism."