New York: Disgraced movie mogul's walk into a New York courthouse was a grim inversion of the red carpets he'd walk at the height of his power. Handcuffed and silent, he ignored a a lineup of reporters snapping photos and shouting questions.

Weinstein was taken to the courtroom about a kilometre away for arraignment. With his arm held by a detective, Weinstein was brought in a back entrance of the courtroom and walked in a half-circle; he dazedly looked around the room and appeared to mouth the word "wow" as he entered. 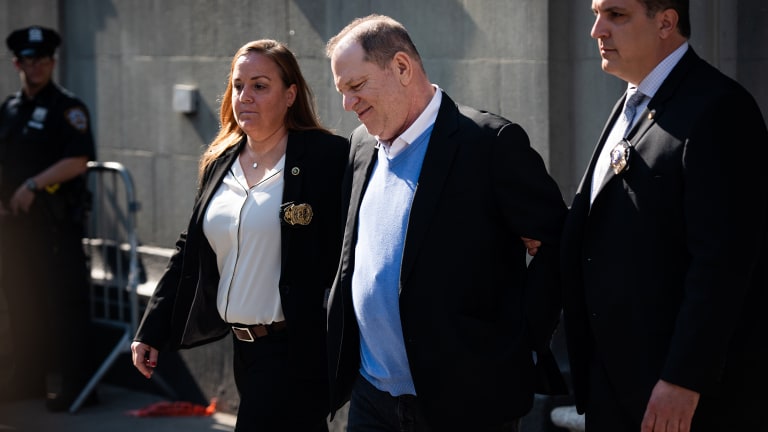 Charged: Harvey Weinstein is escorted in handcuffs out of the New York Police Department.

Weinstein's attorney, Benjamin Brafman, said to reporters on Friday that he plans to plead not guilty – and his legal team will fight to dismiss the charges. "These charges, we believe that they are constitutionally flawed," he said. "We believe that at the end of the process Mr Weinstein will be exonerated."

In the complaint, a New York Police detective stated that in 2004, Weinstein forced a woman to engage in oral sex with him, physically shoving her head downward. The detective also said that in 2013, Weinstein kept a woman in a room against her will "and engaged in sexual intercourse with informant by forcible compulsion," even though she had "clearly expressed her lack of consent to the act."

After his arraignment on Friday morning, Weinstein posted $1 million bail and surrendered his passport. He will wear an electronic monitoring device at all times, and face other travel restrictions.

"Today's charges reflect significant progress in this active, ongoing investigation," Vance said in a statement after the arraignment. "I thank the brave survivors who have come forward, and my office's prosecutors who have worked tirelessly on this investigation." Vance also urged other survivors to contact them. 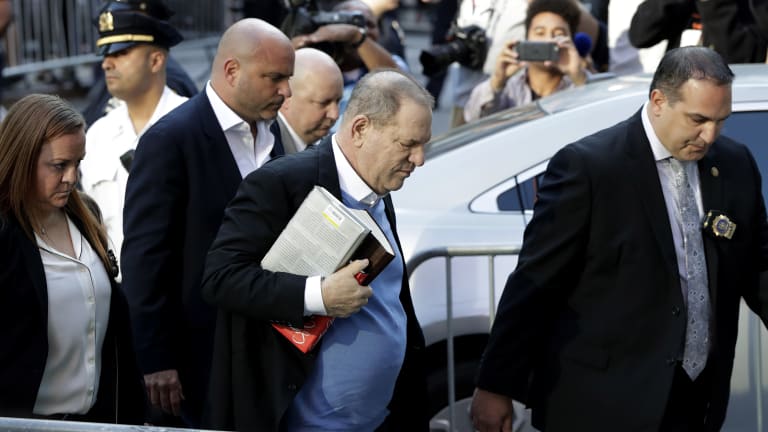 Earlier: Harvey Weinstein turning himself in to authorities following allegations of sexual misconduct.

Weinstein made no comment as he walked into the 1st Precinct police station in Manhattan at about 7:30am, to surrender to authorities. About an hour later, he left the police station in handcuffs, to be driven to court.

Brafman could soon be seen carrying Weinstein's passport, which he would later hand over to Illuzzi in court.

Weinstein's arrest came months after Vance's office reportedly launched an investigation into allegations of sexual assault. Police officials said the arrest and charges stemmed from a joint investigation between the NYPD and the Manhattan District Attorney's office.

For a Hollywood community that is accustomed to Weinstein as a powerful figure – the producer who helped the art house go mainstream with hits such as The English Patient, The King's Speech and Pulp Fiction – the sight of him being led around a courtroom was a jarring one. Wearing a dark jacket draped over a baby-blue sweater, he seemed unsure on his feet and offered a mile-long stare as he turned to face the gallery before the proceeding.

As he exited the courtroom, however, he seemed to spring to life, even backslapping a man in the gallery who stood up to talk to him, saying "hey" to the person as they walked out together.

Law enforcement officials did not immediately identify the two women who Weinstein is charged with attacking. Lucia Evans, a onetime aspiring actress who has said Weinstein sexually assaulted her in 2004 at his Manhattan office, told the New Yorker on Thursday that she was pressing charges against Weinstein, saying: "At a certain point, you have to think about the greater good of humanity, of womankind."

Weinstein had been a powerful force in the entertainment world until last year's series of investigative stories from the Times and the New Yorker that detailed accusations of sexual misconduct made by several women.

Since then, scores more have come forward to claim Weinstein used his status to sexually assault and harass them. The revelations sparked a broader reckoning with sexism in Hollywood that has since touched other industries.

Several other powerful men in media and entertainment, facing accusations of a range of sexual misconduct, have retreated from the spotlight, but few have faced criminal prosecution. (Bill Cosby, convicted last month on three counts of sexual assault, is perhaps the most notable exception.)

Prosecutors made clear Friday that the legal jeopardy facing Weinstein does not end with these charges, saying that they are continuing to investigate allegations of other crimes involving other victims.

Vance, the Manhattan district attorney, had been under fire over his office's handling of a 2015 case against Weinstein. Critics accused Vance – who was re-elected to a third term last year – of possible conflicts of interest with the movie mogul.

The district attorney has repeatedly said there was insufficient evidence to prosecute Weinstein in a 2015 case involving model Ambra Battilana Gutierrez, whose allegations were detailed in the explosive New Yorker piece by Ronan Farrow.

Weinstein's next court date is July 30.