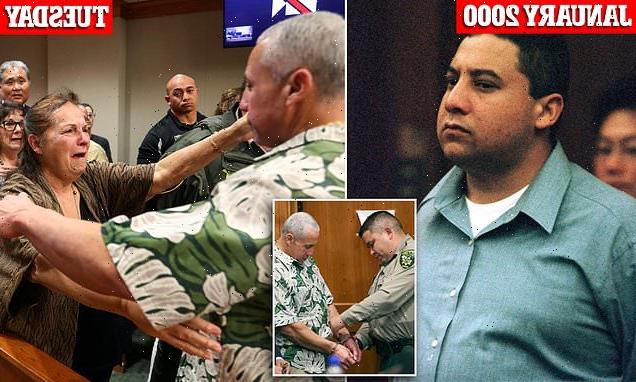 Hawaii man, 51, serving 130-year prison sentence for the Christmas Eve 1991 murder and rape of a 23-year-old Virginia tourist is released after new DNA evidence proves he was not at the scene

A Hawaiian man has been released from prison after spending more than 20 years behind bars for the murder, kidnapping, and assault of a female tourist – which new evidence proves he did not commit.

He was sentenced to 130 years in prison, but always insisted he was innocent.

On Tuesday, Judge Peter Kubota ruled that Schweitzer should be ‘released from his shackles immediately.’

Kubota’s declaration prompted applause in the Hilo courtroom and hugs for Schweitzer, who was flown to the Big Island for the hearing from the Arizona prison where he was serving his sentence. 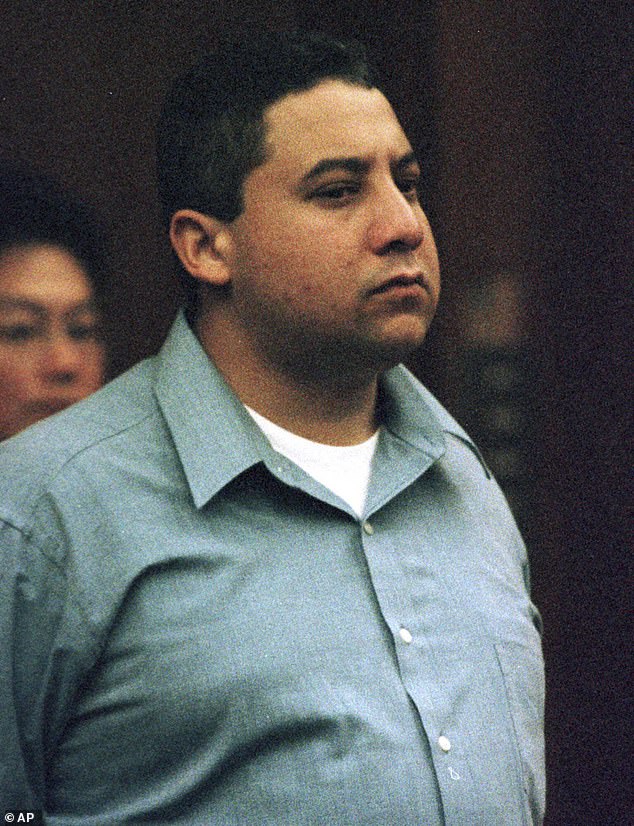 Albert ‘Ian’ Schweitzer is pictured in January 2000, on the opening day of his trial 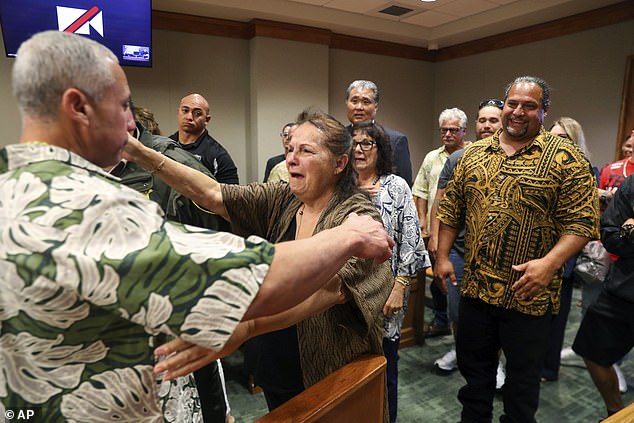 ‘My feelings were all over the place,’ said Schweitzer, speaking to AP about the moment of his release.

He said the justice system was ‘flawed,’ calling himself one of many imprisoned for crimes they did not commit.

He earlier told reporters that he was ‘grateful’ for the judge doing the ‘honorable thing.’

A petition filed late Monday outlined additional evidence in one of Hawaii’s biggest murders, which unfolded on the Big Island.

Dana Ireland, 23, was found barely alive in the bushes along a fishing trail in Puna, a remote section of the island.

She had been sexually assaulted and beaten, and later died at Hilo Medical Center.

The mangled bicycle she had been riding was found several miles away and appeared to have been run into by a vehicle. 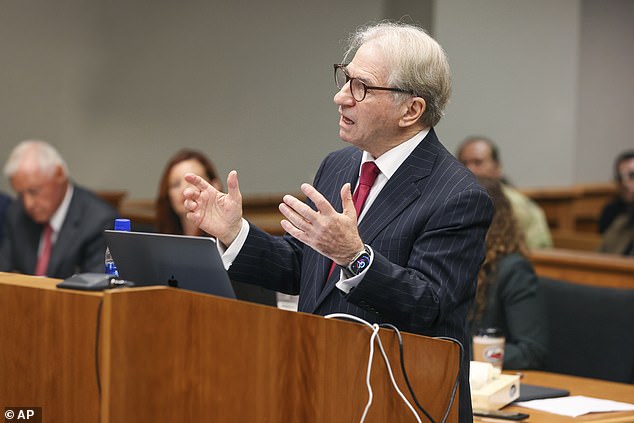 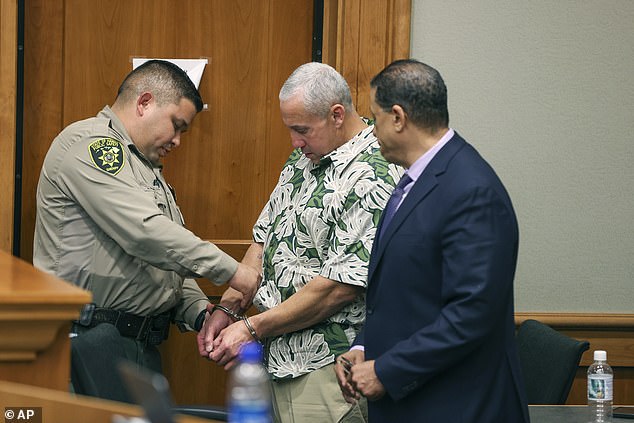 The murder of the blond-haired, blue-eyed visitor from Virginia gained national attention and remained unsolved for years, putting intense pressure on police to find the killer.

‘Whenever you have a white, female victim … it gets a lot more attention than people of color and Native Hawaiians,’ said Kenneth Lawson, co-director of the Hawaii Innocence Project.

‘The parents, understandably, were becoming more and more infuriated.

‘There was insurmountable pressure to solve this case. And when that happens, mistakes are made. Some intentional and some unintentional.’

Ireland’s relatives are yet to comment on Schweitzer’s release.

Lawson secured the release of Schweitzer with help from the Innocence Project in New York.

Schweitzer was the last of three Native Hawaiian men convicted in Ireland’s death who had remained imprisoned.

DNA evidence previously submitted in the case belonged to an unknown man – and all three of the convicted men were excluded as sources. 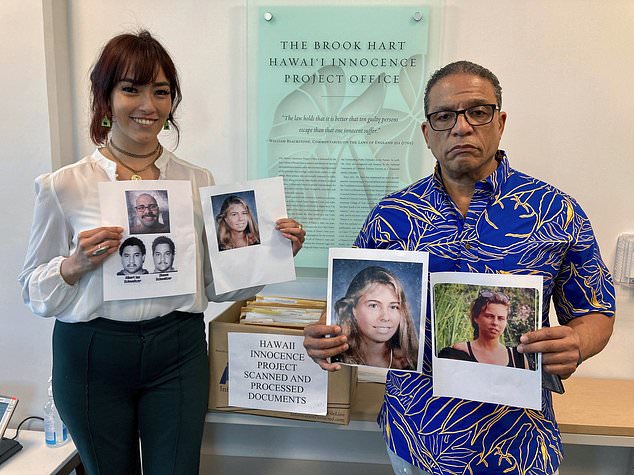 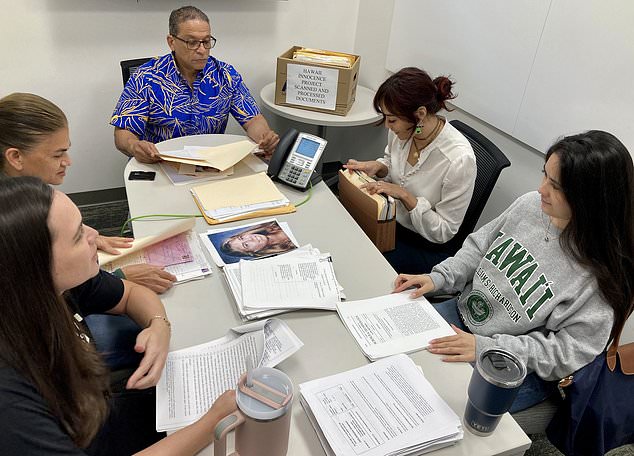 Lawson, background center, and law students go over files and photos related to the 1991 murder

New DNA evidence showed that traces found on a ‘Jimmy Z’ brand T-shirt, near Ireland and soaked with her blood, belonged to the same unknown man.

Additionally, a new tire tread analysis concluded Schweitzer’s Volkswagen Beetle car did not leave the tire marks at either location where Ireland and her bicycle were found.

A forensic odontologist also concluded an injury on her left breast was not a bitemark, as previously believed, the petition said.

‘At a new trial today, a jury would not convict Mr Schweitzer of Ms Ireland’s sexual assault and murder,’ the petition said.

‘In fact, a prosecutor would likely not even arrest Mr Schweitzer for this crime.’

The likelihood that all three men participated in a sexual attack and left no trace of biological evidence – including a lack of evidence uncovered with advanced forensic testing – is ‘extraordinarily improbable,’ the petition said.

In 2019, Schweitzer’s attorneys and Hawaii County prosecutors entered into a ‘conviction integrity agreement’ to reinvestigate the case.

It was the first time in Hawaii there has been this type of agreement, Lawson said, which is increasingly being used to reexamine questionable convictions and guard against future errors.

‘Over the last three years, we have shared information and re-examined forensic evidence.

‘No matter the outcome in these post-conviction proceedings, we remain committed to identifying unknown male #1 and seeking justice for Dana Ireland and her ‘ohana,” said Hawaii County Prosecuting Attorney Kelden Waltjen, using the Hawaiian word for ‘family.’ 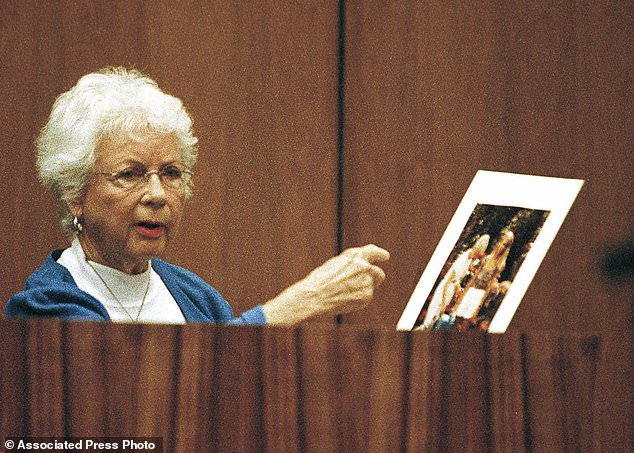 Louise Ireland, Dana’s mother, gestures towards the last photo taken of her daughter, during a July 1999 hearing

However, Deputy Prosecuting Attorney Shannon Kagawa asked the judge to deny the petition, saying the new evidence wouldn’t change the outcome of a new trial.

Kubota disagreed, saying that based on the new evidence, a jury would acquit Schweitzer.

Much of the background on the Ireland case is detailed in a document filed with the petition, which lists facts that defense attorneys and prosecutors have stipulated.

In 1994, police made what they believed to be a major breakthrough.

A man facing charges for his role in a cocaine conspiracy contacted police and claimed his half-brother, Frank Pauline Jr., witnessed Ireland’s attack, according to the stipulated facts document.

Police interviewed Pauline, who was in his third month of a 10-year sentence for an unrelated sex assault and theft.

But he was interviewed at least seven times and gave inconsistent accounts each time, eventually incriminating himself, the stipulation document said.

Despite the lack of evidence linking them to the killing, the two Schweitzers and Pauline were indicted in 1997.

At one point the charges were dismissed because all three men were excluded as the source of semen found in Ireland and on a hospital gurney sheet.

They were indicted again after another informant claimed Ian Schweitzer confessed to him in jail that Pauline raped and killed Ireland.

Pauline later said he offered details to police about the Ireland murder in order to get drug charges dropped against his half-brother.

In a prison interview with the A&E show ‘American Justice,’ Pauline compared his story to the tale of the boy who cried wolf.

‘Wasn’t me,’ he said in a strong Hawaii Pidgin accent.

But when he started telling the truth, he said no one believed him.

Shawn Schweitzer took a deal to plead guilty to manslaughter and kidnapping – and receive credit for about a year served and five years of probation – after seeing juries convict Pauline and his brother in 2000.

In October, Shawn Schweitzer met with prosecutors and recanted.

According to the stipulation document, he pleaded guilty because his ‘parents did not want to risk losing another son and encouraged Shawn Schweitzer to do what he needed to do to come home and not suffer the same fate as his brother.’

Shawn Schweitzer ‘continues to feel immense guilt about agreeing to the confession and entering a guilty plea for a crime he did not commit and falsely implicating his brother,’ the document said.

A polygraph test in November showed he was telling the truth when he denied any involvement in the murder, the document said.

Pauline was killed in a New Mexico prison by a fellow inmate in 2015.

Being back in Hawaii ‘tastes great,’ Schweitzer told the AP.

‘The water is good.’