A camel was overwhelmed by flash floods as a tropical cyclone ripped across the Gulf.

The video shows the camel in distress as it bobs in the rapids flowing in the al-Mahra province of eastern Yemen on Sunday afternoon.

The video was posted on Twitter by [email protected]

The storm called ‘Cyclone Luban’ struck the borders of Oman and caused carnage throughout Yemen. 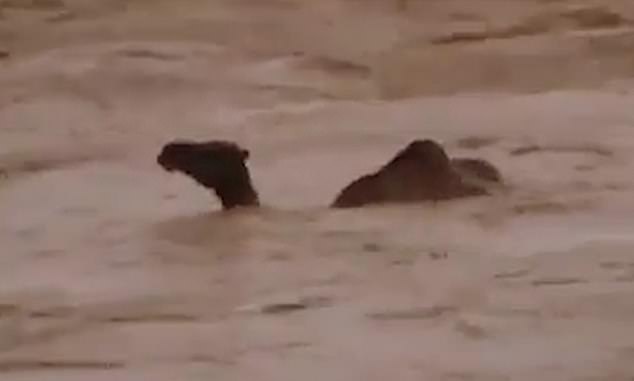 Around 70 percent of the al-Mahra province has been affected by the storm, which formed as a cyclone Luban but has been downgraded to a tropical storm.

Two aircraft, one Yemeni and the other from the United Arab Emirates, are ferrying residents of the provincial capital, Gheita, to safety. 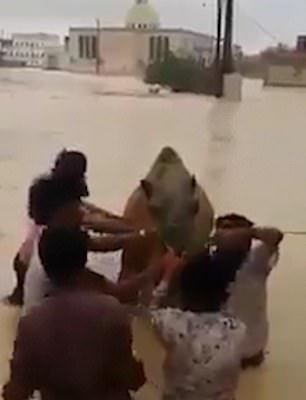 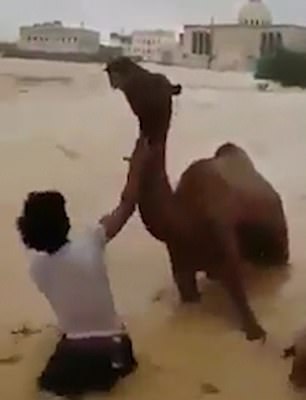 Yemeni officials have for help to evacuate some 50 families stuck amid flooding and heavy rain in the area, describing the situation as ‘disastrous.’

Amin Hassan, a member of the provincial rescue committee, said hundreds of homes have either been destroyed or damaged and thousands of livestock have been swept away by flooding.

Thousands headed to the mountains to escape, and power outages hit some areas.

The United Nations said 33 people have been injured in al-Mahra and that a total of 2,000 families have been affected by the storm

The coastal areas of the province were hit the hardest.

The U.N. Office for the Coordination of Humanitarian Affairs, or OCHA, added that humanitarian partners are already helping on the ground, but gave no details.

The storm touched down far from the front lines of Yemen’s civil war, in which a Saudi-led coalition has been battling Iran-aligned rebels since 2015.