HEARTBREAKING pictures have emerged of Hessy the humpback whale being hauled out of the Thames as experts revealed she had been hit by a boat.

Her lifeless body was hoisted out of the water by a crane this morning after it was confirmed the whale had perished yesterday near Greenhithe, Kent. 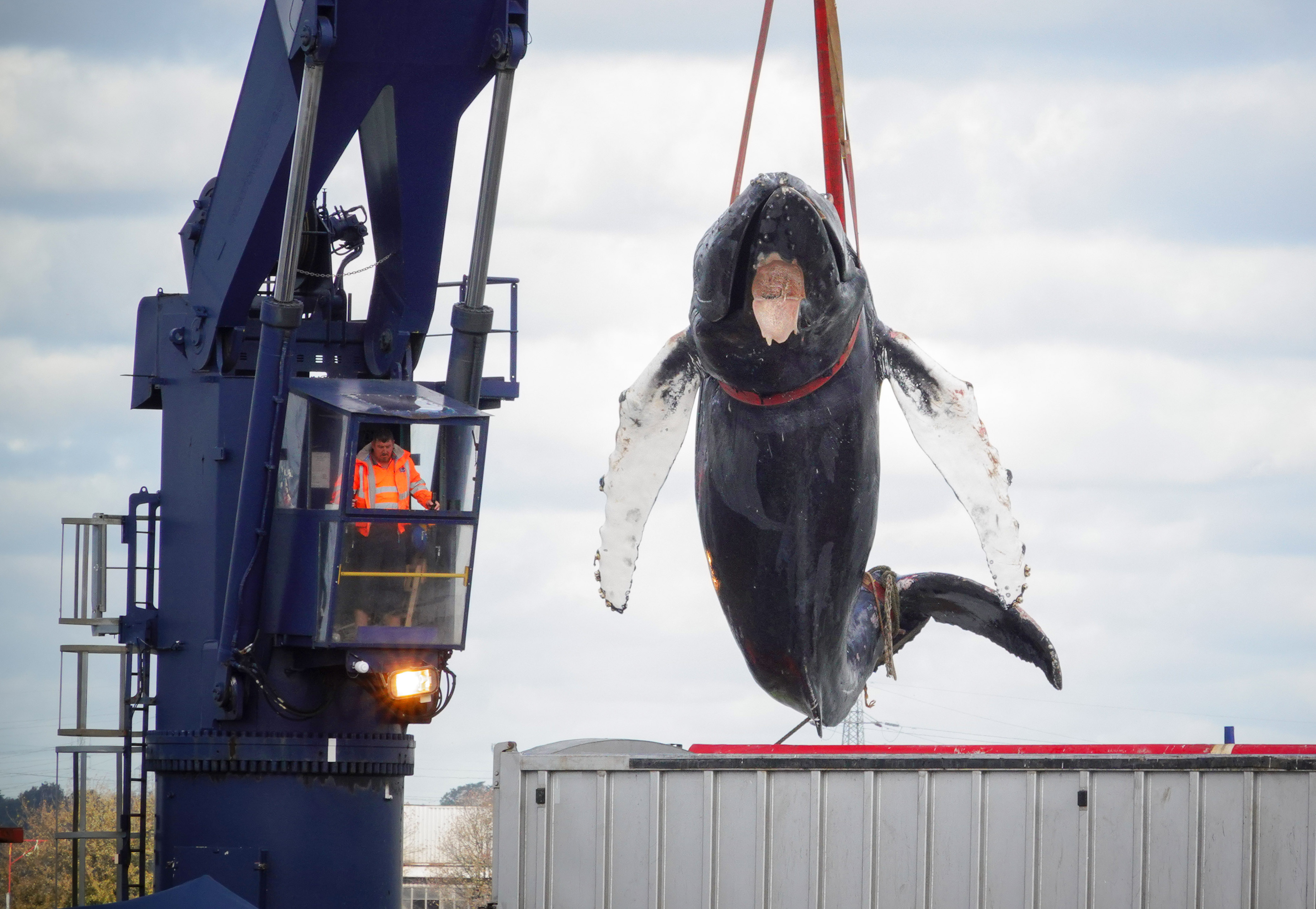 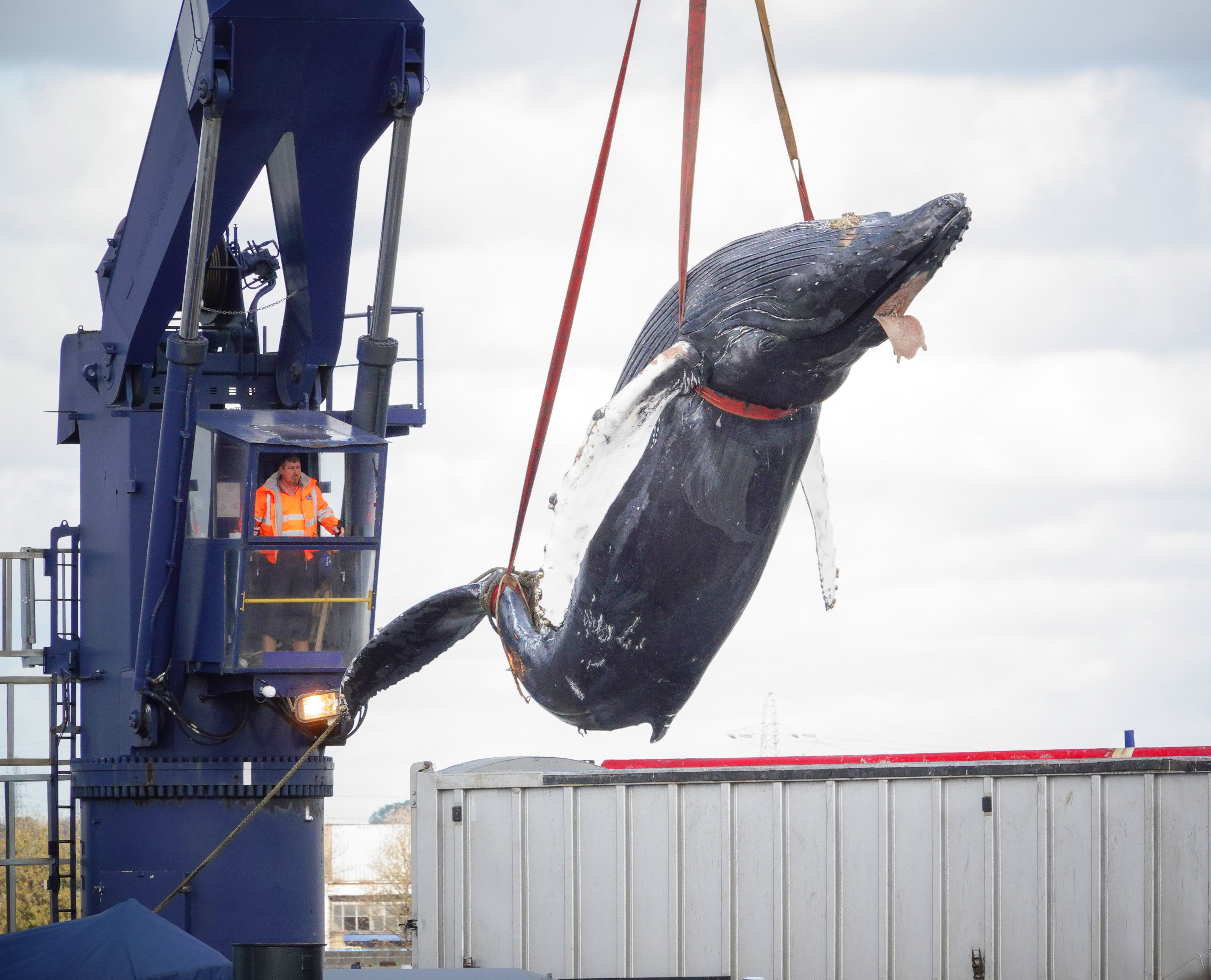 The 33ft marine mammal died after getting stuck in the River Thames this week.

Tragic images showed the majestic beast hanging limply from the crane before being lowered onto a lorry.

From their she went on her final journey to a building where a necropsy is being carried out by the London Zoological Society to determine the cause of death.

It took a team of three boats to haul Hessy from the QEII Bridge in Dartford six miles to Gravesend.

The three boats worked together to slowly move the carcass along the river to the Port of London Authority's Denton Wharf.

It took the team four hours, moving at one and a half miles an hour, to drag Hessy through the water.

Hessy was then hauled out of the water this morning and put into the back of a lorry, before being covered over and taken for an autopsy.

Martin Garside, of the Port of London Authority said: "The animal looked to be in quite good condition last night. There were no clear signs of it being hit by a boat.

"There were no obvious signs of damage, it was floating just under the water however so not all of the body was visible. It looked to be in good condition."

Another humpback whale which entered the Thames 10 years ago is known to have died of starvation. 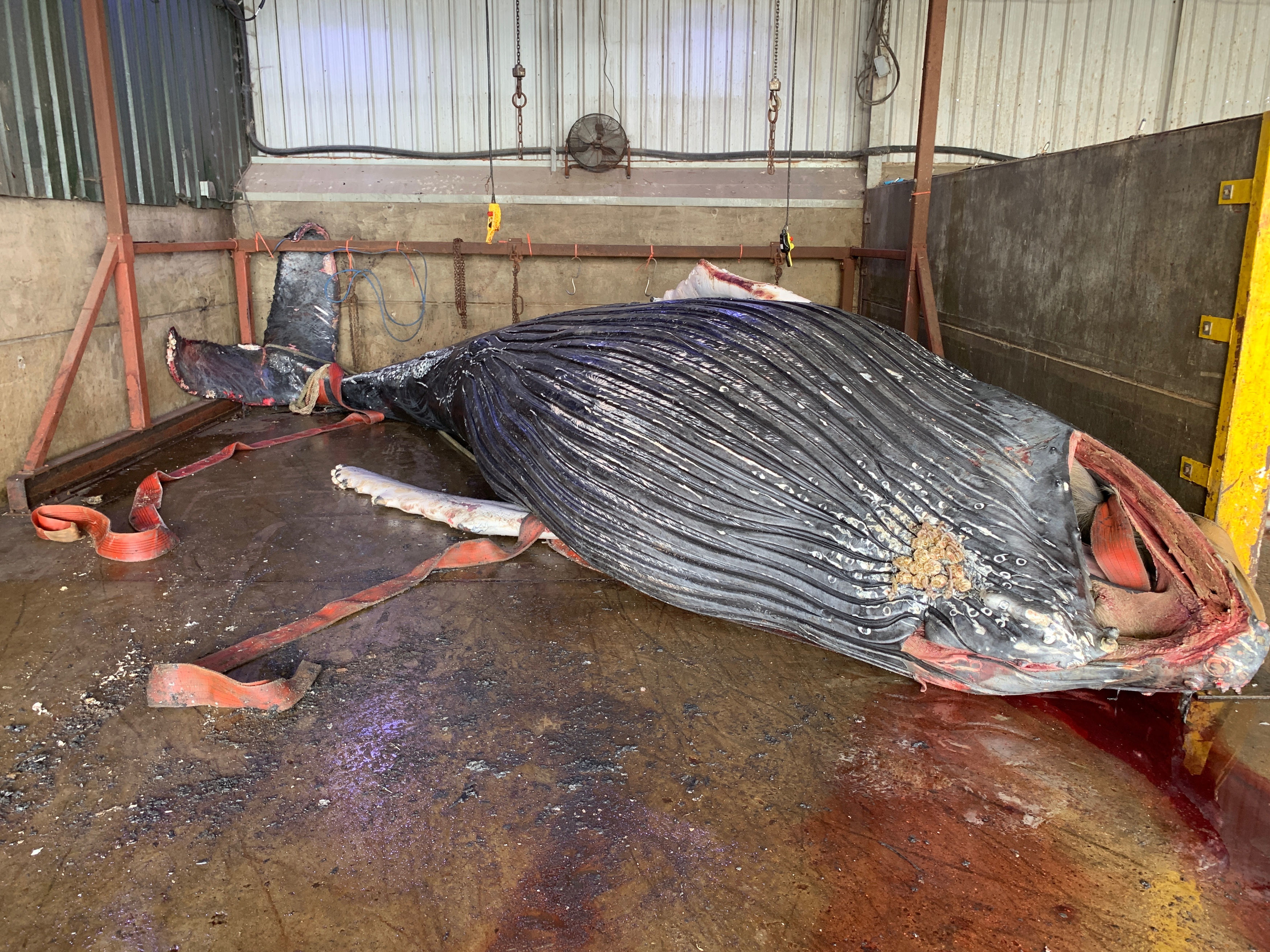 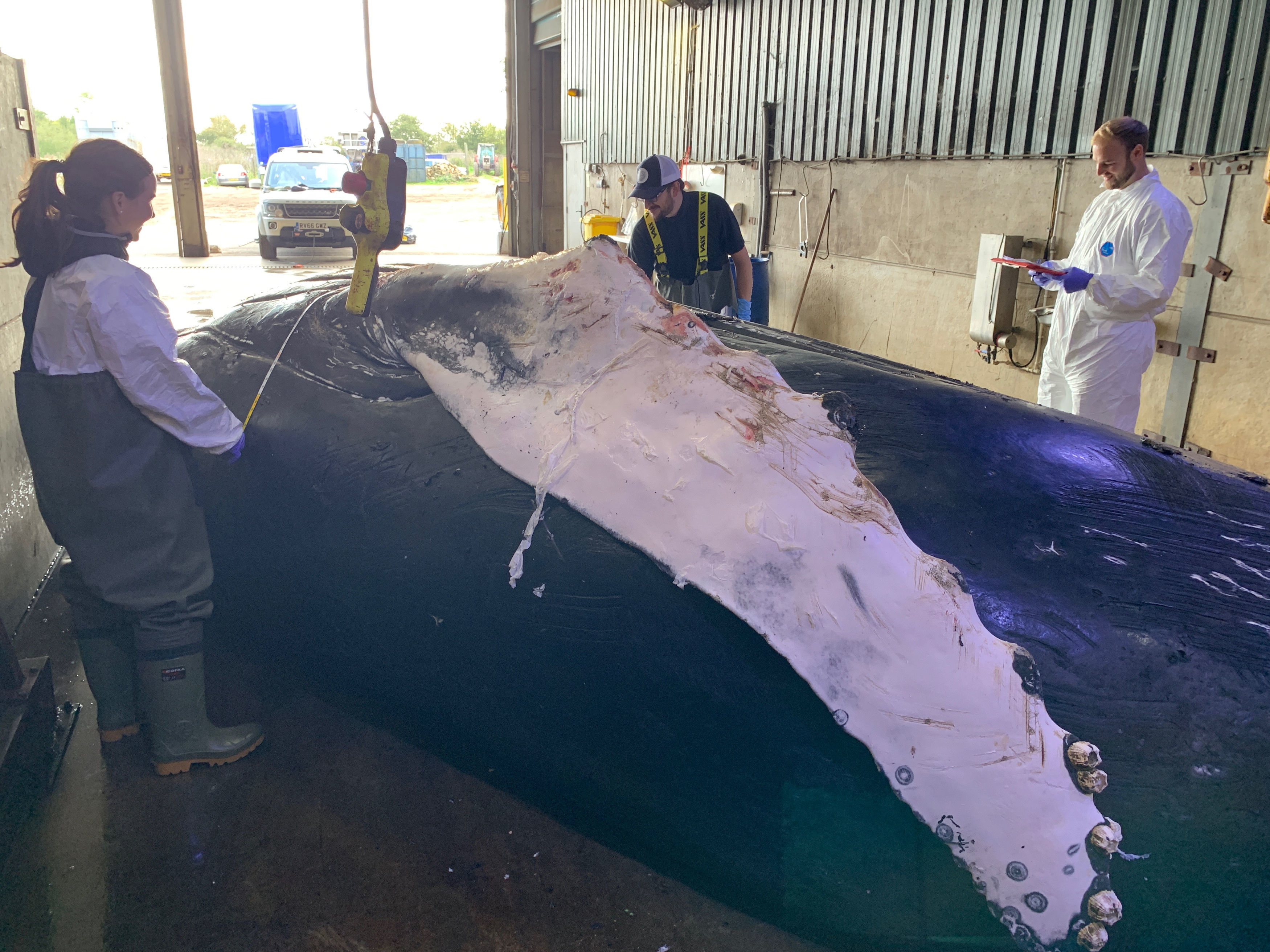 "The last whale was malnourished – It could be the case here that it was malnourishment but that is all speculative," Mr Garside said.

"It must have been hard for it to get the amount of food that it is used too in a busy river."

The CSIP will carry out an initial assessment to determine weight, sex and size before a detailed autopsy takes place.

Experts were looking for a site large enough to carry out the tests this morning, with the usual protocol of London Zoo not suitable for a whale the size of Hessy.

The British Divers Marine Life Rescue tweeted yesterday: "Terribly sad news that soon after 5pm today the humpback whale which had not been seen in the Thames all day, was found dead around the Greenhithe area. 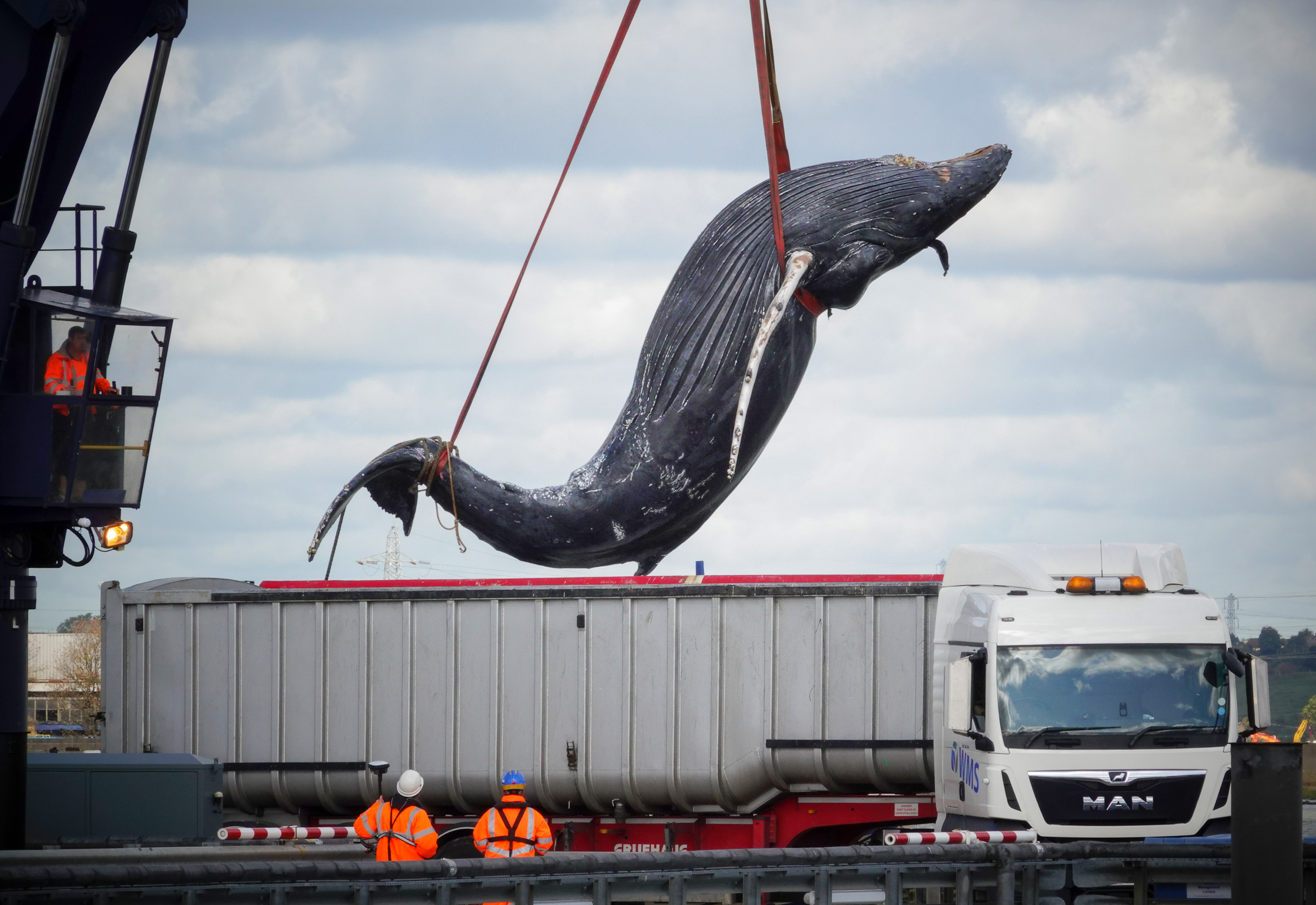 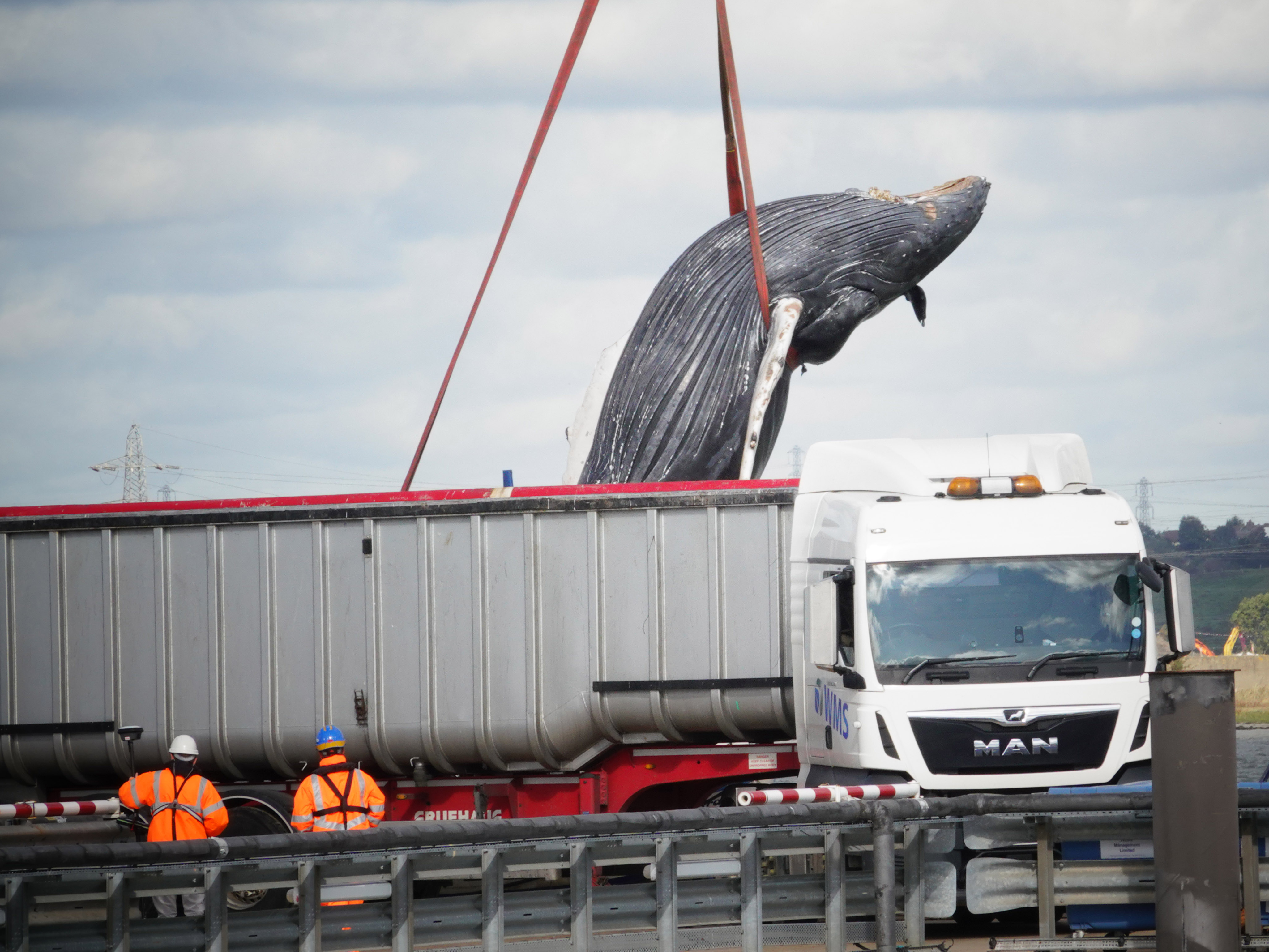 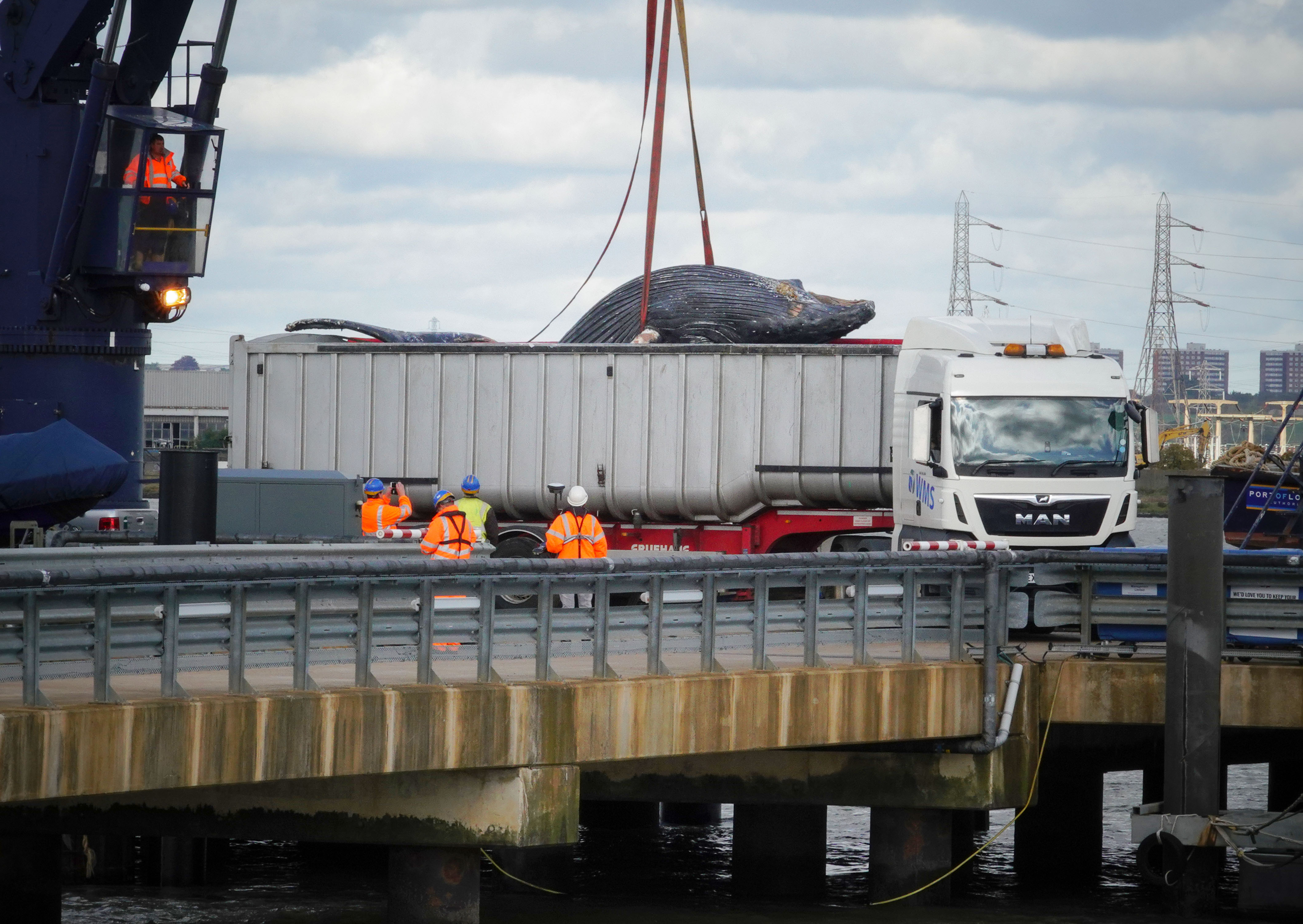 There were six previous sightings of the massive marine mammal – said to measure up to a staggering 33ft – in the river on Sunday, the first at Tilbury in Essex.

She was spotted yesterday between Crayford Ness and the Queen Elizabeth II Bridge in Dartford, Kent – more than 60 miles inland from the sea.

There was only one confirmed sighting of Hessy today before her lifeless body was found.

It was feared the whale might not have enough food.

Rob Deaville, manager of the Zoological Society of London's (ZSL) Cetacean Strandings Investigation Project said: "From initial examinations ZSL can confirm the humpback whale is a juvenile female and has a large wound indicative of a ship strike, but it is currently unknown whether this was inflicted before or after the whale's death." 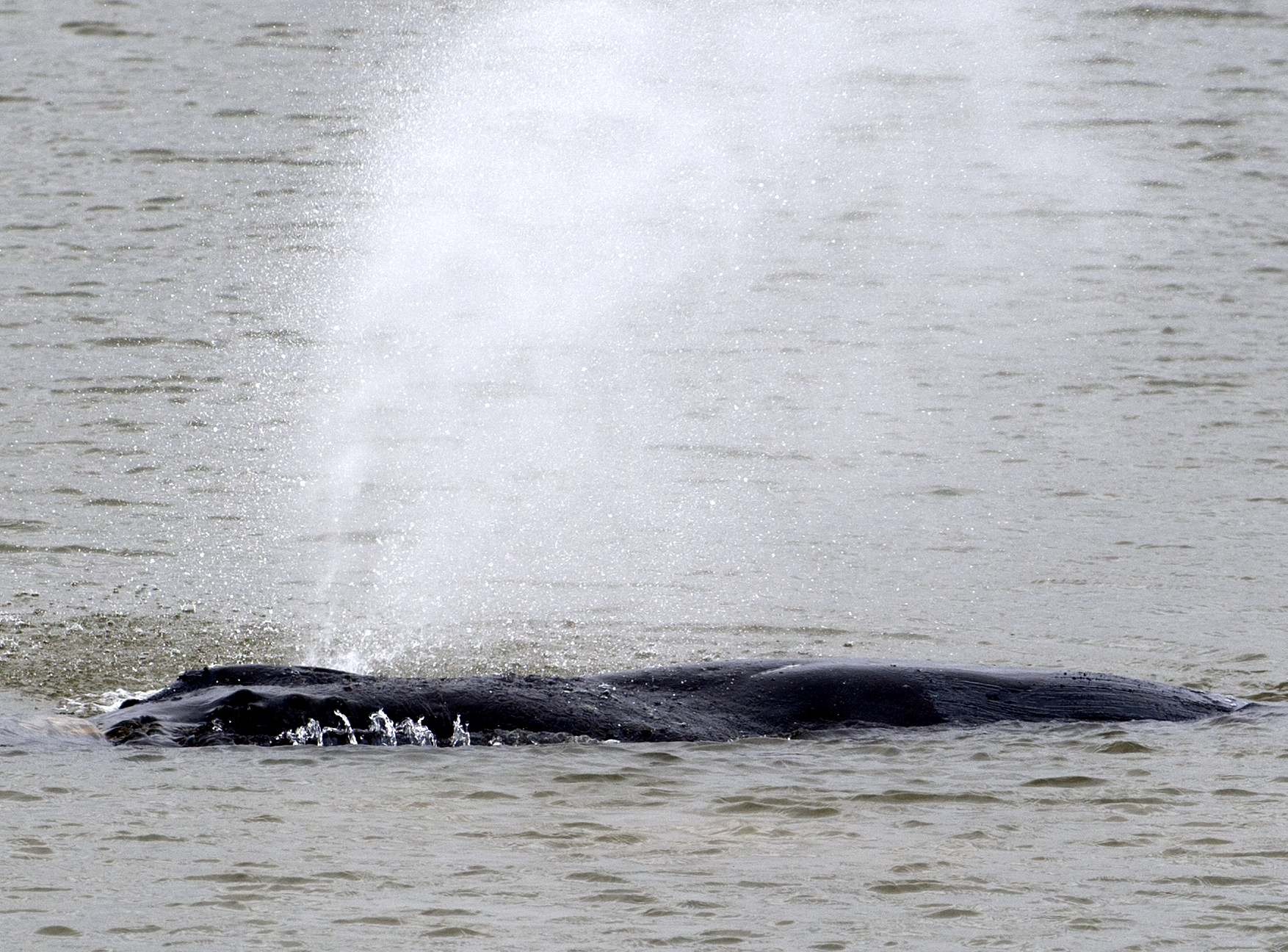 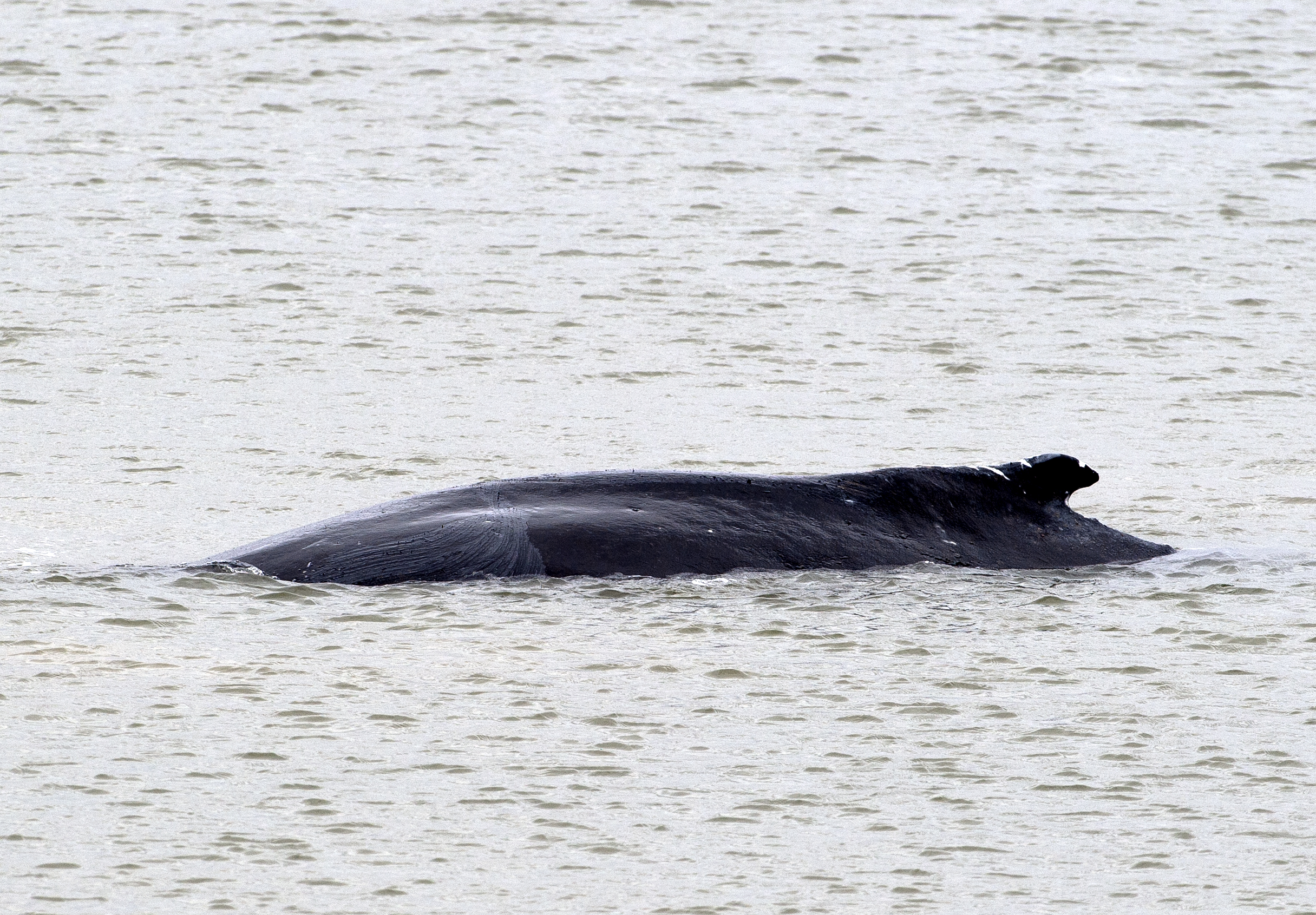 Julia Cable of the British Divers' Marine Life Rescue charity said: "From photographs we have seen, it doesn't seem to have a lot of fat reserves.

"It is swimming up and down the river so it is using more and more reserves all the time."

The charity did not send any boats out to monitor the whale because they feared it could stress the animal.

They are also reliant on members of the public to contact them with any sightings.

Earlier today, a small group of whale watched gathered at Greenhithe in the hope of seeing Hessy.

Linton Hopkins, 50, has come out to see his third whale in the Thames.

He said: "At the moment I’m not too confident of seeing it, hopefully it’s gone.

“It’s a wild creature and shouldn’t be here. It would be nice to see it but ideally it will have swam out.

“It will be very confused and very frightened. They’re sea creatures after all. They’re deep diving animals and it’s not deep enough to dive here.

“I wonder what it’s feeding on, there’s not a lot for it to eat here.”

The whale has signs of ‘historic entanglement’ scarring on its dorsal fin but looks unharmed apart from that.

Experts believe she made a navigational error and swam up the Thames from the North Sea last week on a spring tide when the water level is at its highest.

The rare species can weigh up to 30 metric tonnes in adult form.

It comes just over a year since Benny the Beluga set up home further downstream at Gravesend last summer.

Mr Hopkins saw Benny last year and the whale that swam through central London in 2006.

He added: "I saw the beluga in Gravesend last year and I saw the whale in central. That was amazing – it was right outside my office I was very lucky.

“I had to come today. It would be nice to see but it would be better if was out at sea.

OTHER Thames visitors in the past 15 years have included:

2004: A short-snouted sea horse was spotted in the river and hailed as confirmation it was a clean waterway.

2006: A bottlenose whale, nicknamed Whaley caused hysteria in London when she swam upstream for three days. She sadly died from a heart attack after being rescued.

2009: A young humpback whale was washed ashore at Dartford. It was thought to have died of starvation. 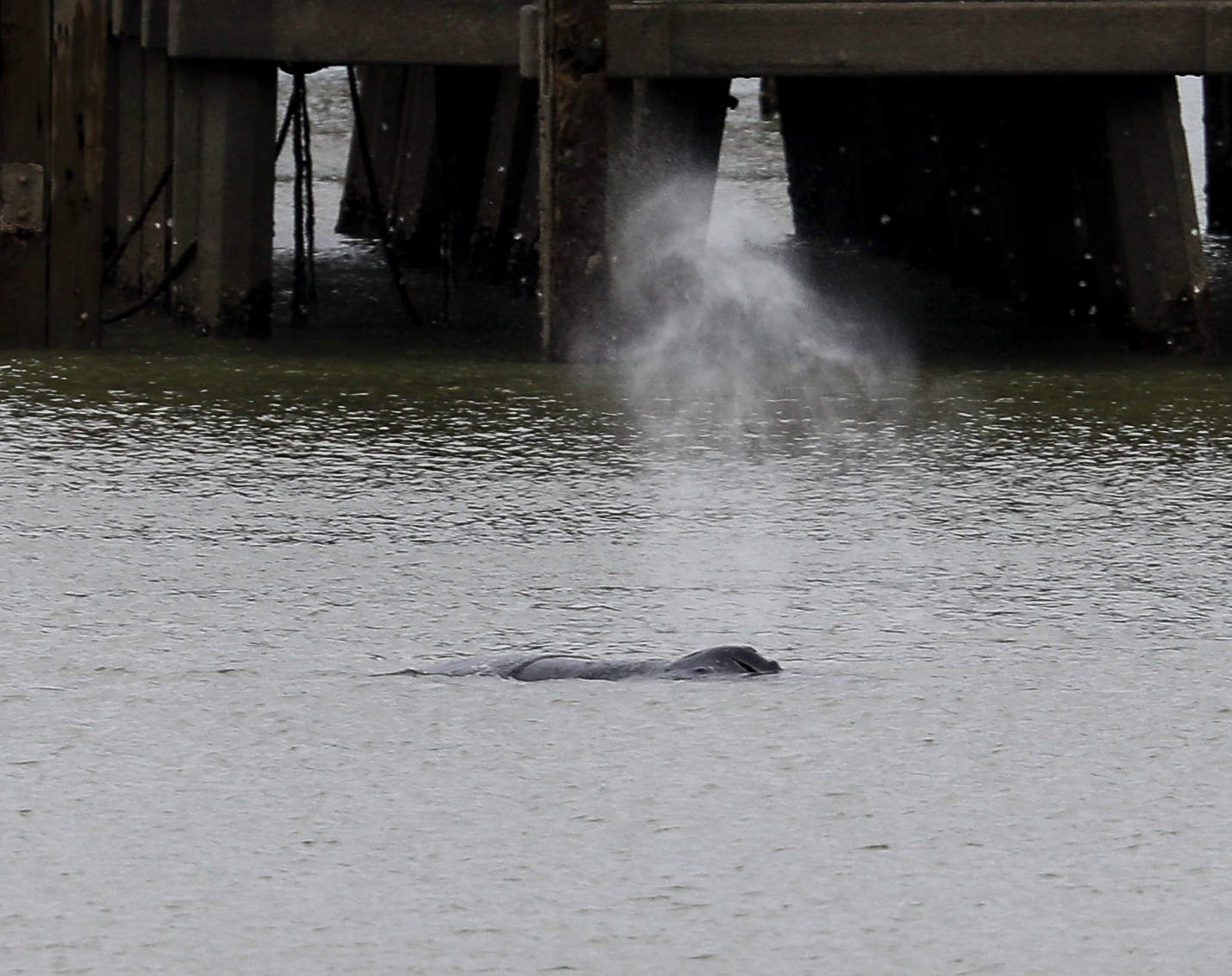 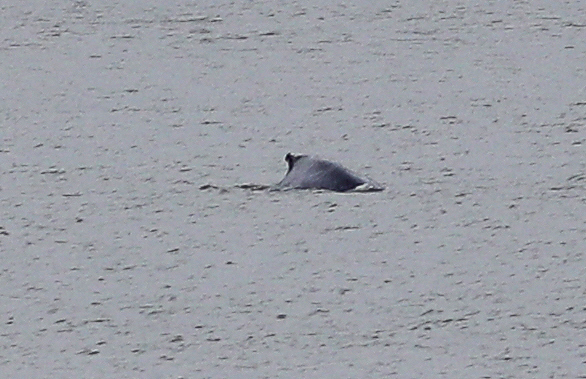 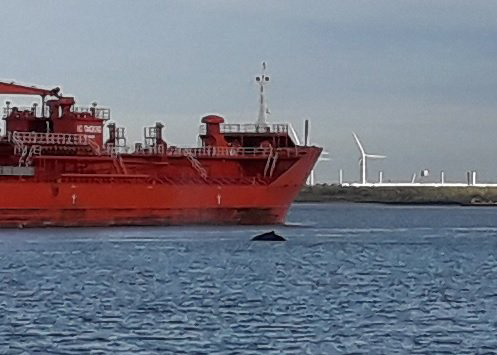