EXCLUSIVE – ‘I don’t want a charred body to be my last memory of Sophie’: Heartbroken father of murdered French nanny says he’s haunted by her death – and releases her touching childhood photos

The father of French nanny Sophie Lionnet says he is haunted by the death of his ‘irreplaceable’ daughter as her killers were today found guilty of her murder.

Fighting back his tears, Patrick Lionnet said: ‘I try to think of Sophie the last time I saw her – happy and smiling, but sometimes I cannot block out the horror.’

Looking through precious childhood photos of Sophie growing up, he said: ‘The picture of Sophie smiling in my house with the dog, telling me that she loves me and that she will miss me, has been replaced with the sound of my baby’s voice full of fear and thick with tears.

‘I have seen photos of her starved body – like something out of Auschwitz – that hardly resembled my precious child.

‘I don’t want the image of a charred body, a recognizable human nose and fingers to be my last memory of her.’ 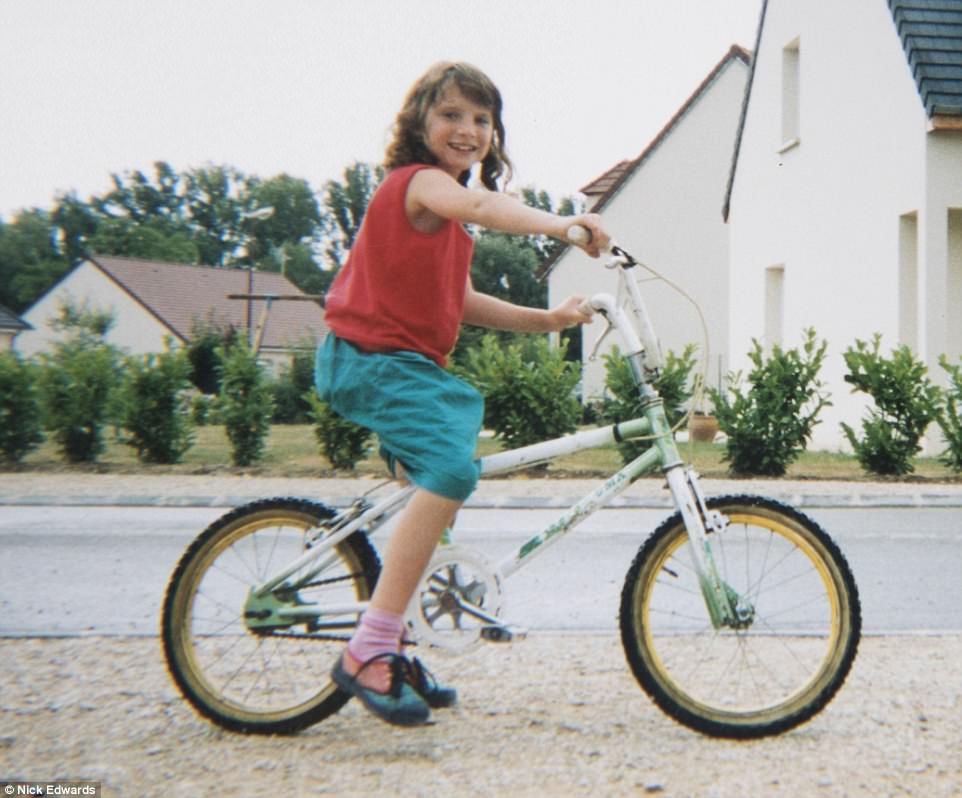 French nanny Sophie Lionnet, pictured as a little girl while growing up in Troyes, south of Paris, was murdered in a home in Wimbledon, south London by Sabrina Kouider, the mother of the little boy she was looking after and the woman’s boyfriend 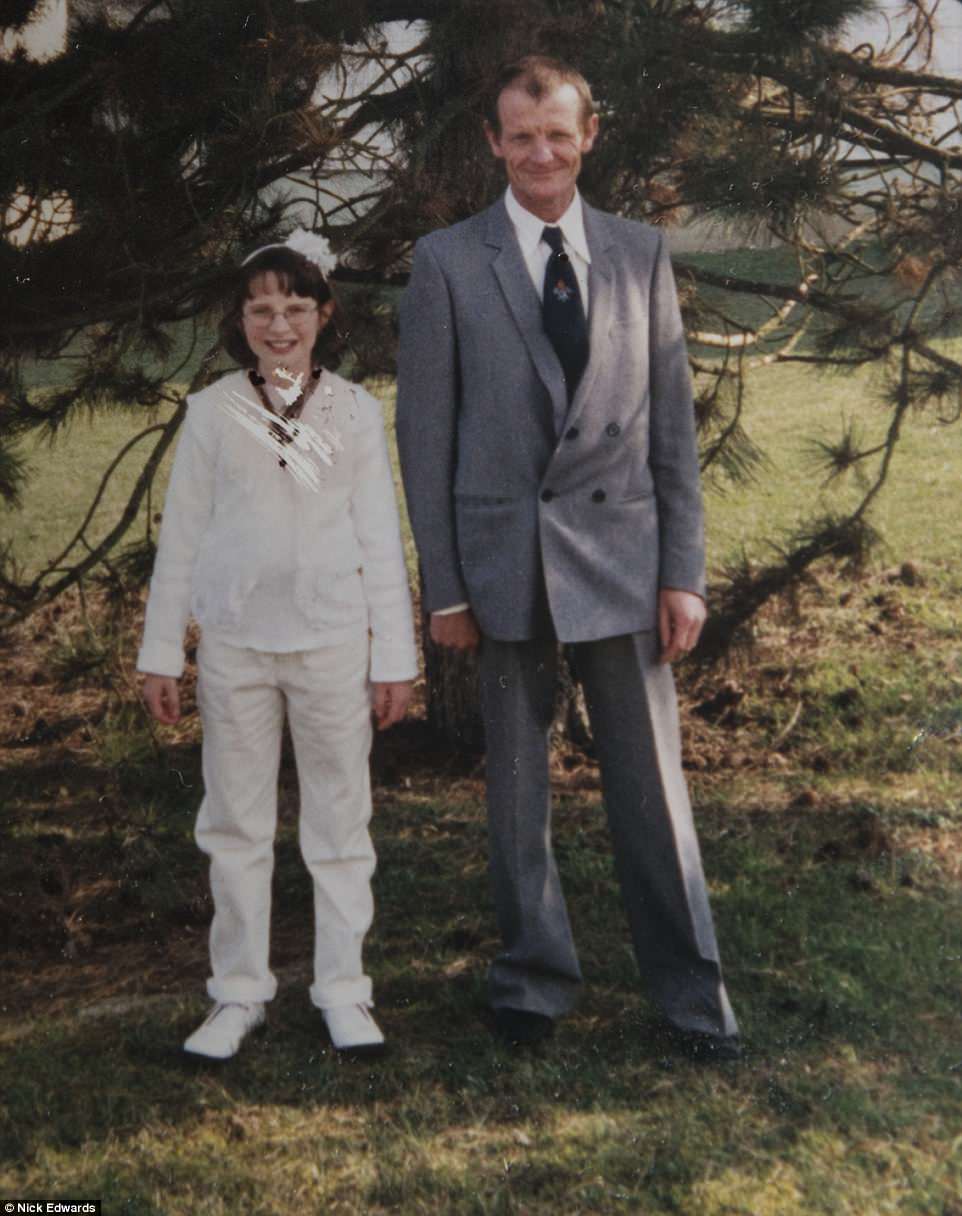 Sophie’s devastated father Patrick Lionnet, 56, a gardener, pictured with his daughter as a youngster, told MailOnline from his home in France that he is haunted by her death and that he doesn’t want her charred body to be his lasting image of her 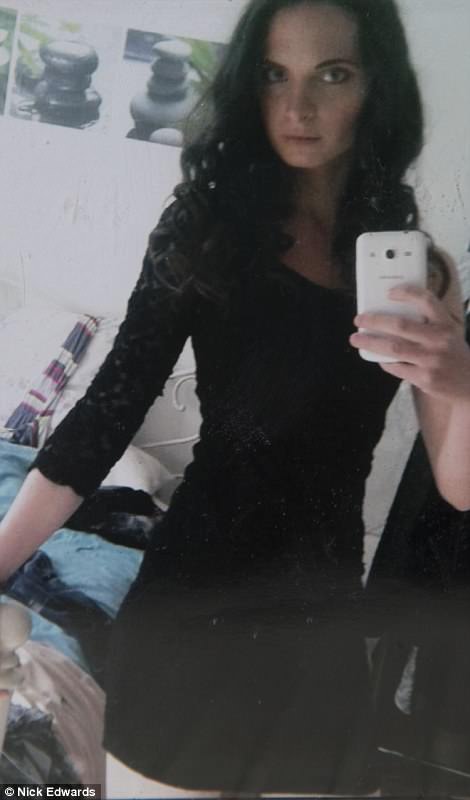 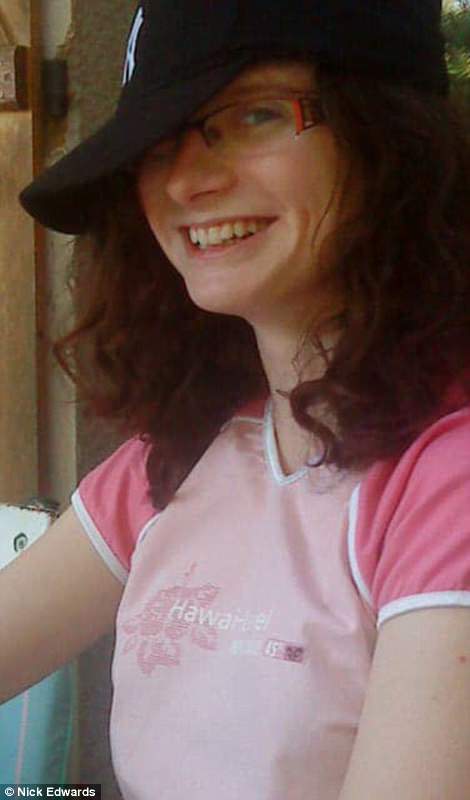 Sophie was starved and beaten during her 14 months of looking after her killer Sabrina Kouider’s son and living at her home where she was paid £50 a week. She was tortured by French fashion designer Kouider and her partner Ouissem Medouni 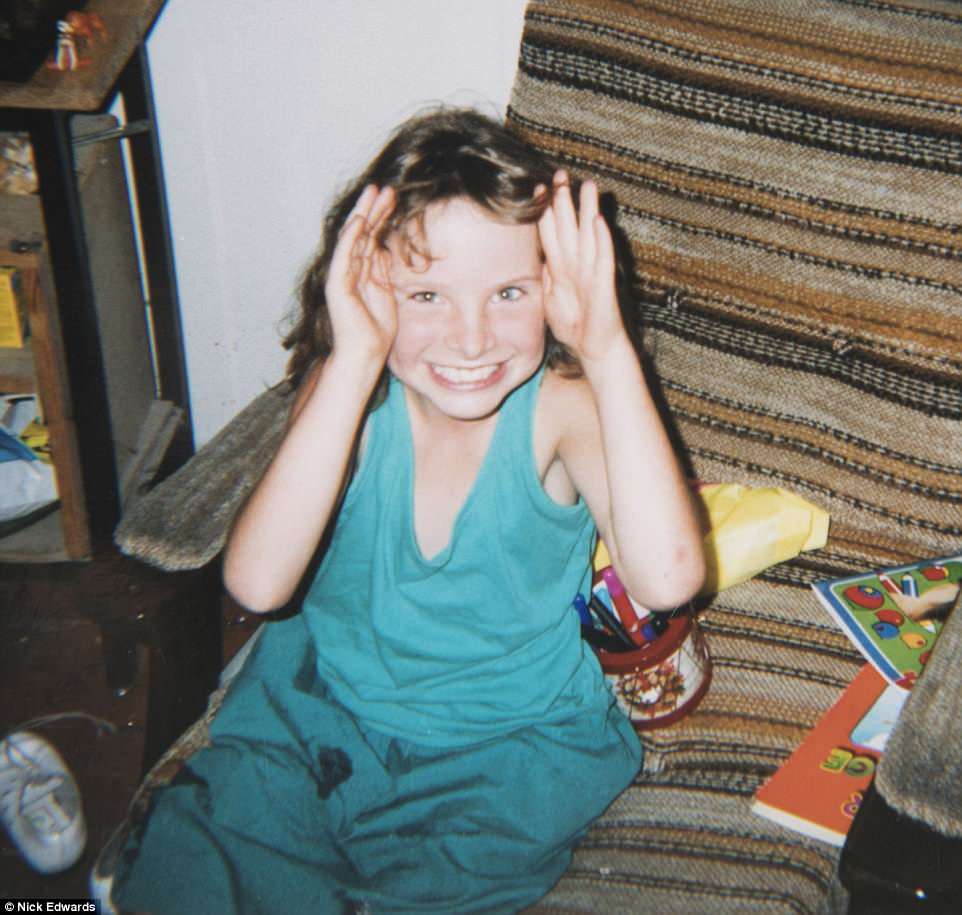 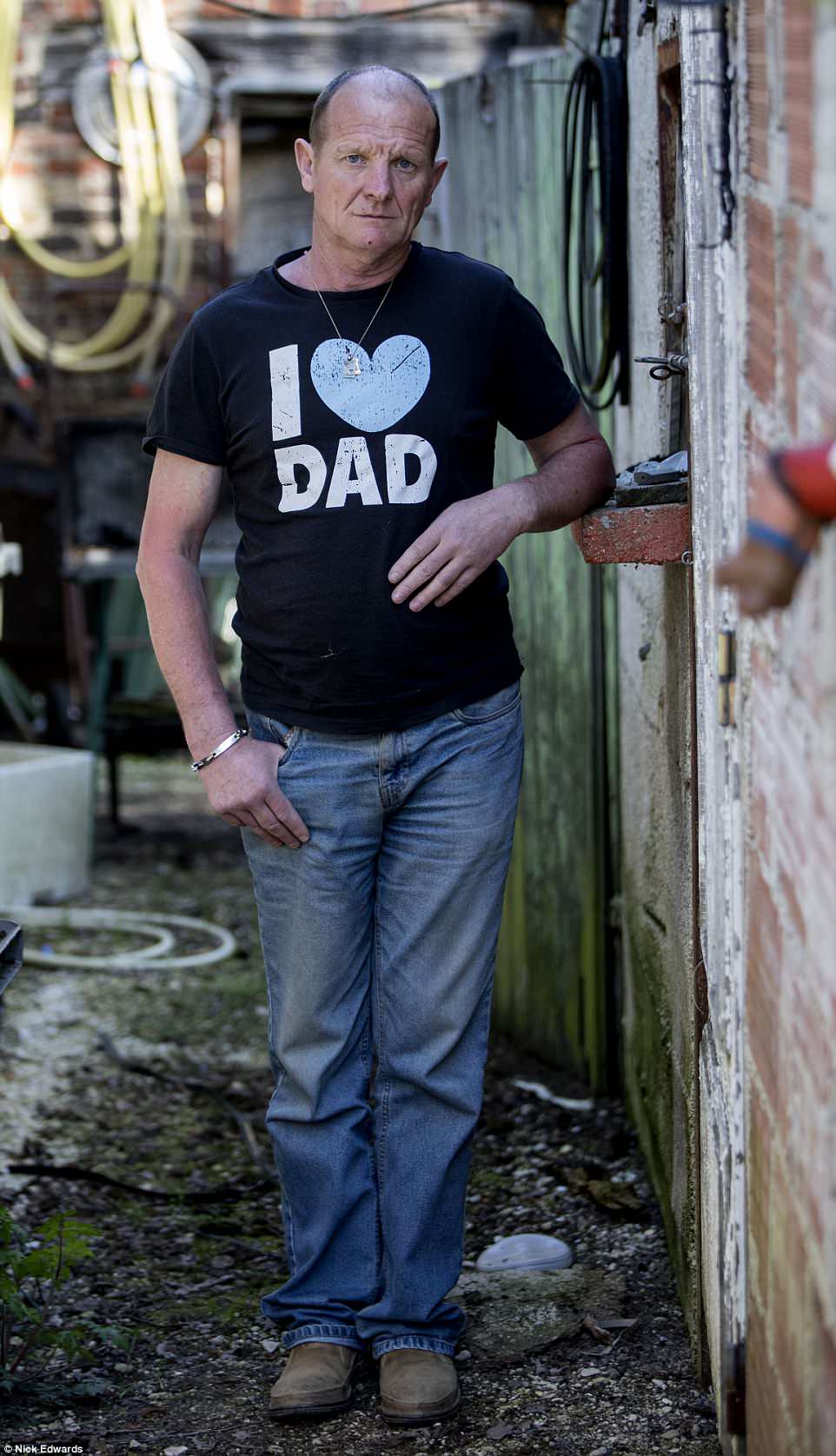 Speaking from his home in France, Mr Lionnet said: ‘When I was in London [for the trial] I barely slept, maybe one or two hours a night. I have these terrible images in my head. I try not to think about what they did to Sophie but I have been through hell.’ Mr Lionnet wears the I love Dad t-shirt Sophie gave him for Father’s Day a couple of years ago 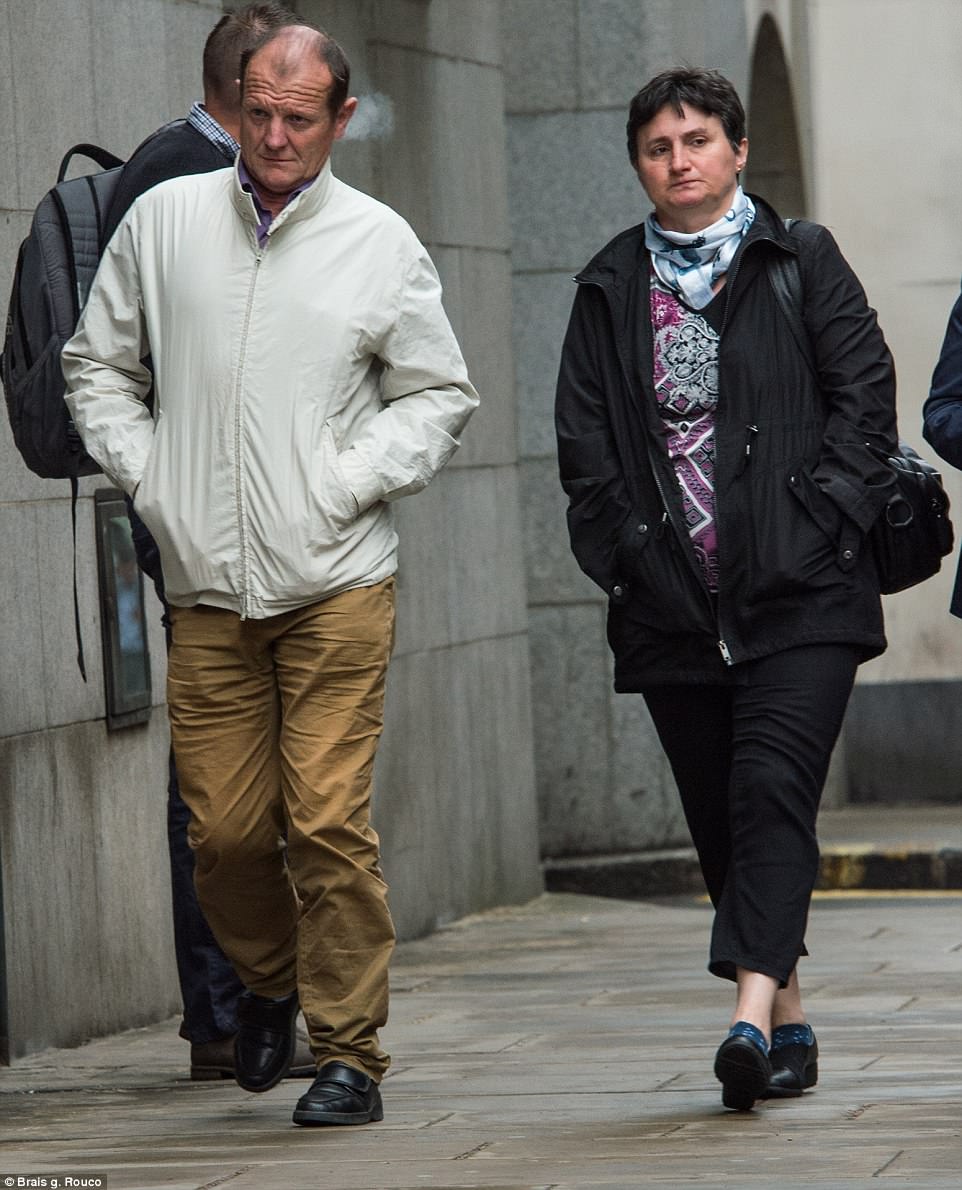 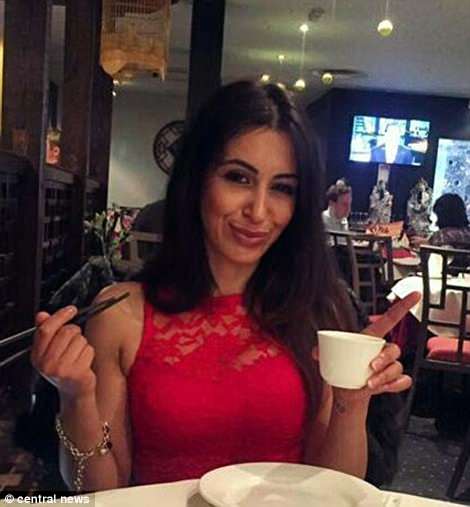 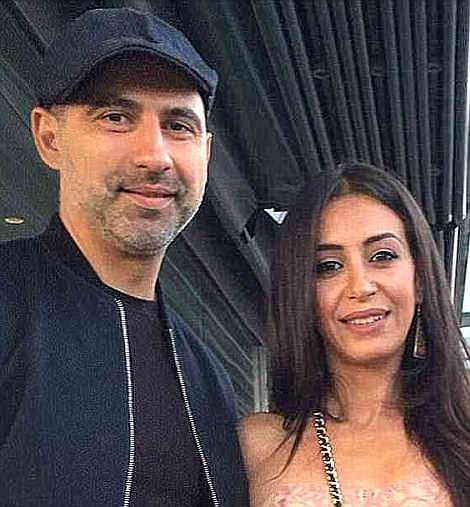 Sabrina Kouider (left) was today convicted of murdering her nanny at the Old Bailey. The jury found that Kouider, 35, and her boyfriend Ouissem Medouni, 40, (right with Kouider) had killed her au pair Sophie and burned her body in the back garden

In September last year Sophie was murdered by French fashion designer Sabrina Kouider, 35, and her partner Ouissem Medouni, 40, in the home in Wimbledon, south London, where she looked after Kouider’s young son.

Sophie was drowned in the bath before her body was burned in the garden. She had been starved and tortured in the months leading up to her death.

Kouider was obsessed with her ex-partner, Boyzone founder Mark Walton with whom she had a young son, and was convinced that Sophie was colluding with Walton and sleeping with him.

Both Kouider and Medouni blamed each other but the jury did bid not believe them and both were found guilty today at the Old Bailey.

The guilty verdict brings no comfort to Mr Lionnet, 56, who says he struggles to block out the sound of Sophie pleading for her life – which was played to the court – when he closes his eyes.

He tries not to think of her charred remains of her body burned in the back garden of the family home in London where she worked as an au pair.

Speaking exclusively to MailOnline Mr Lionnet, a gardener for the local authority, from Troyes, south of Paris, tells how he ‘went through hell’ during the Old Bailey murder trial.

‘I try not to think about what they did to Sophie but I have been through hell.

‘When I was in London [for the trial] I barely slept, maybe one or two hours a night. I have these terrible images in my head.

‘When I heard the audio of Sophie being tortured I cracked. I just couldn’t take it. I cannot forget the images of Sophie’s body that were shown in court.

‘They are not human, they are savages. They don’t deserve to ever get out of jail for what they did to Sophie. I don’t ever want to see them walking free on the streets. They deserve the severest punishment possible.’

Sitting in the garden of his modest home in France, Mr Lionnet proudly wears the ‘I love Dad’ t-shirt that Sophie gave him as a Father’s Day present a couple of years ago.

Around his neck he wears a pendant bearing Sophie’s face. Portraits of her are displayed all around his unfussy rural home. The birthday card Sophie sent him from London has pride of place on his mantelpiece.

He went on: ‘Sophie was my old child, my pride and joy. She was the spitting image of me when she was born and she will always be my baby, no matter how old she is. I don’t have much money but I spoiled her.

‘We are also very similar in character – a bit shy and reserved, but happy. She was always smiling.

‘I remember her smiling and laughing the last time I saw her just before she went to England. I thought going abroad would do her good, open up new horizons for her, so I encouraged her to go.

‘She always liked working with children so I thought she would be happy. I never had any idea she was in trouble.

‘It breaks my heart to know that in her final months she was abused, that she suffered in silence and that beaten so badly.’ 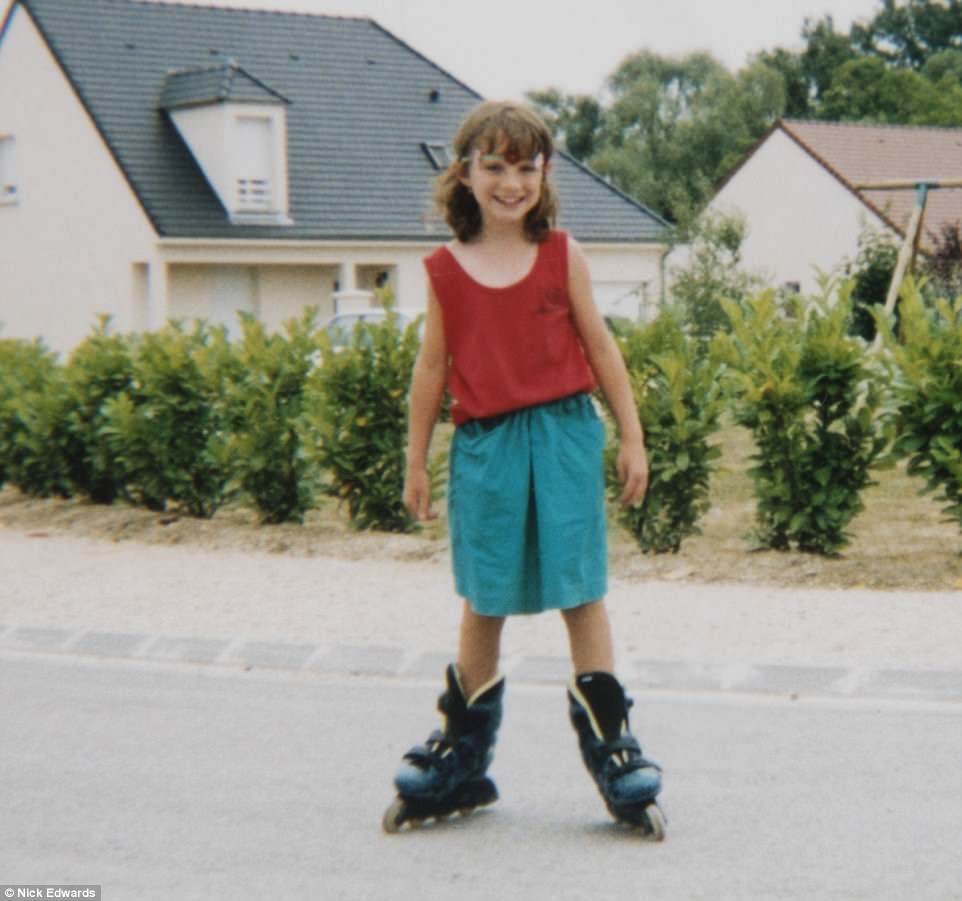 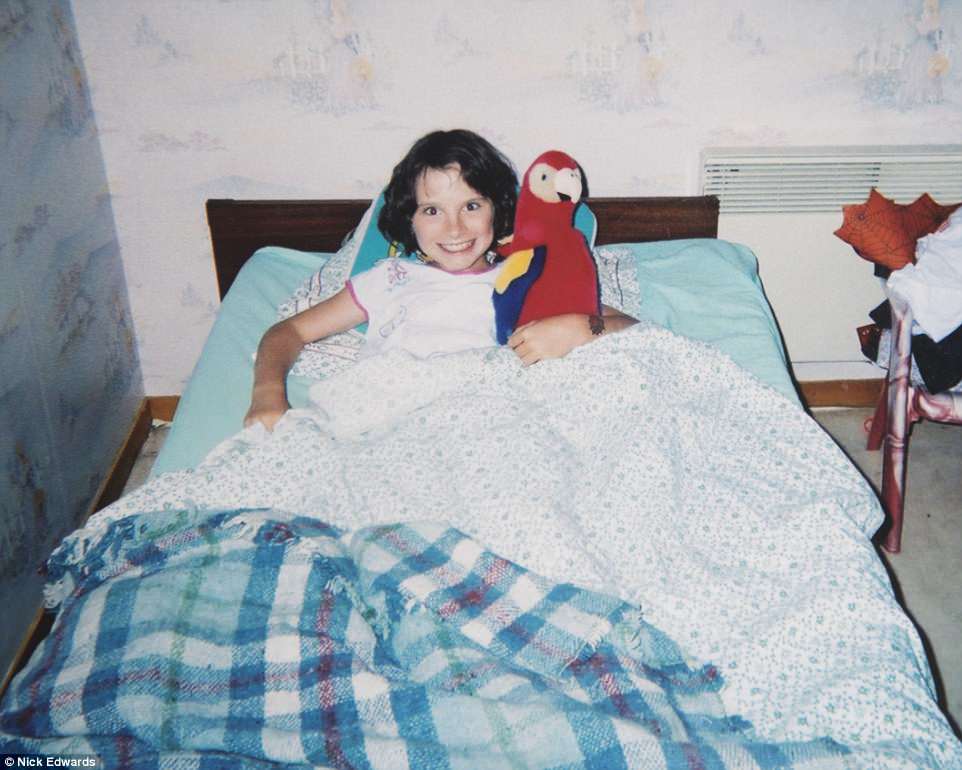 In September last year Sophie was murdered by French fashion designer Sabriner Kouider, 35, and her partner Ouissem Medouni, 40, in the home in Wimbledon, south London, where she looked after Kouider’s young son 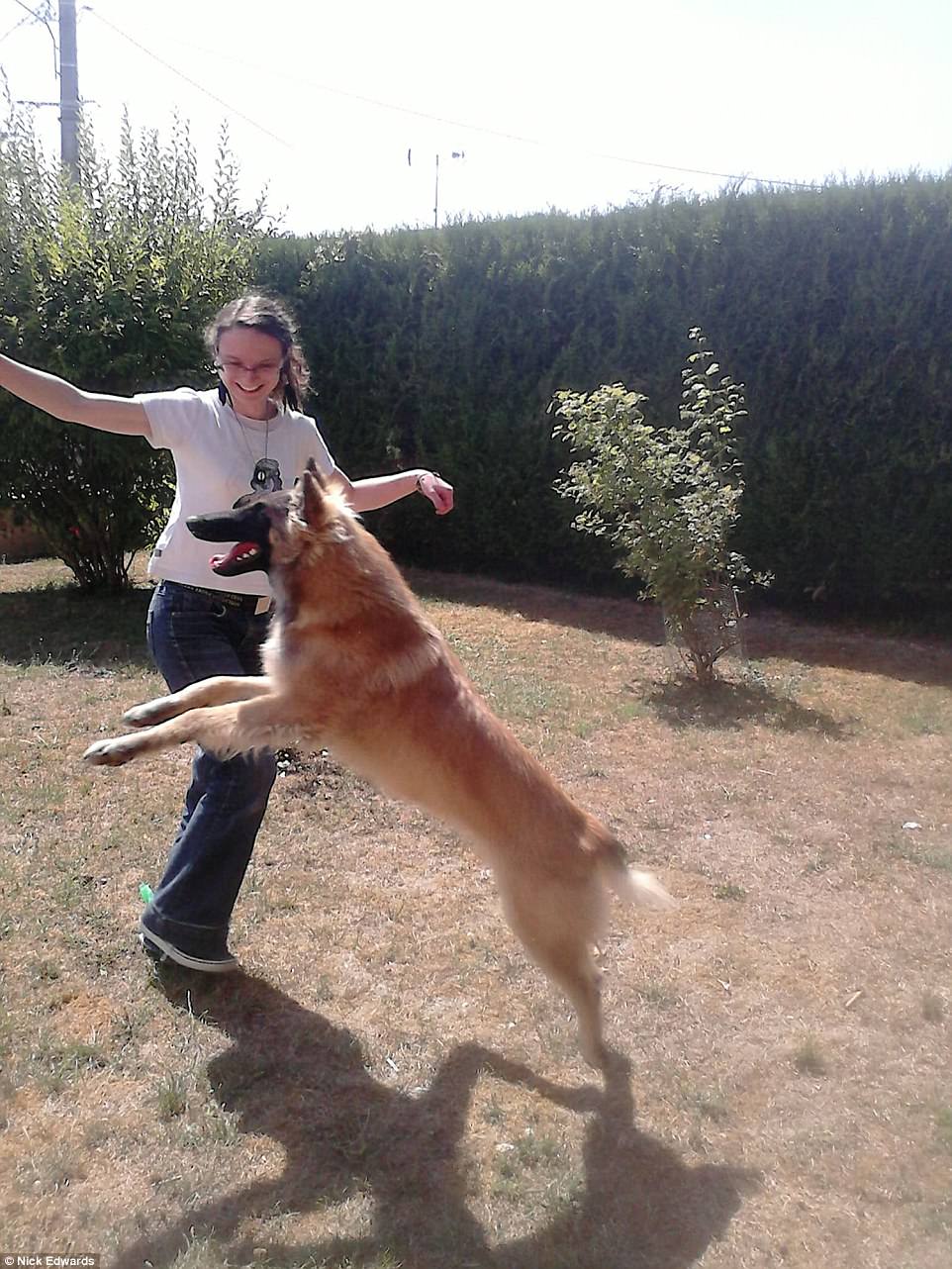 Sophie, pictured playing with the family dog while she was growing up in France, was drowned in the bath before her body was burned in the garden. She had been starved and tortured in the months leading up to her death

Mr Lionnet told how evil Kouider and Medouni had not only robbed him of his only child but of his future – walking his daughter down the aisle and the joy of becoming a grandfather.

‘They have not only stolen the life of my only child, so brutally and without remorse, they have also stolen my sleep, my happiness, my piece of mind, my future.

‘I will never have that moment of pride of seeing my baby girl dressed in white, with flowers in her hair and love and hope glistening in her eyes, as she takes my arm, to walk down the aisle to a man who would cherish her as much as I.

‘I will never hear my daughter say, ‘Daddy, you are going to be a grandfather’. I will never be called Granddad.’

He added: ‘What they did to my child is beyond comprehension and unforgivable.

‘The suffering they caused my young and impressionable daughter, our families and friends, is more than anyone should be forced to live with.

‘They have ruined everything that we held dear. They have murdered my daughter, who was dependent on them.

‘They burned her body so badly that she was unrecognizable. We have still not been able to lay Sophie to rest. We have not been granted closure. This nightmare doesn’t end for us.

‘We will carry the brutality of my daughter’s final moments in our hearts and souls for the rest of our lives.’

While Mr Lionnet separated from Sophie’s mother Catherine Devallonne when his daughter was four years old, he maintained a strong relationship with his little girl.

‘Sophie and I have always been close,’ he said. ‘She had more freedom when she was with me than with her mum.

‘She liked coming over. We would watch films and play video games together. She was friends with some of the other kids in the area. 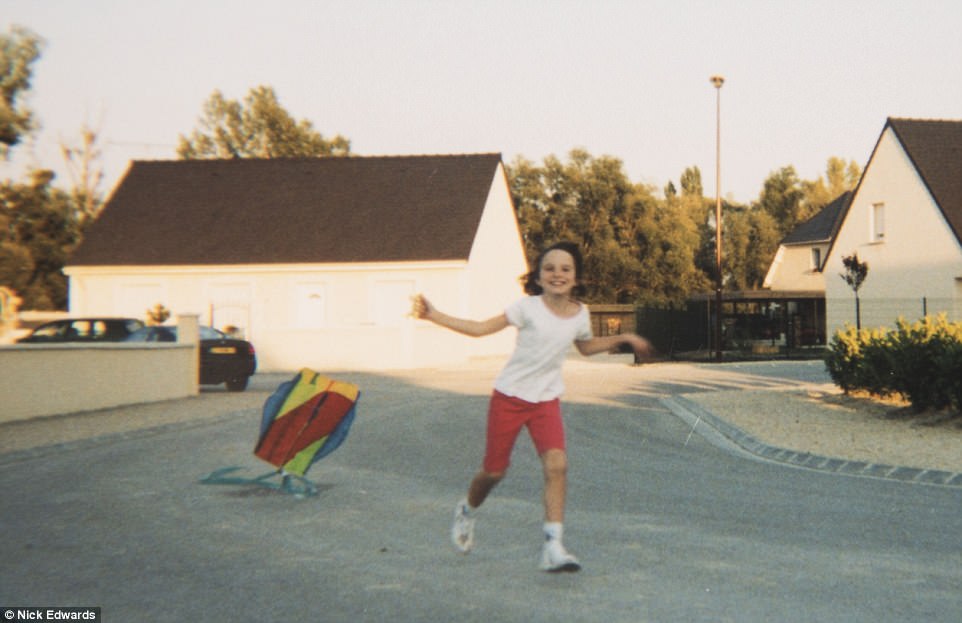 Mr Lionnet told how evil Kouider and Medouni had not only robbed him of his only child Sophie, pictured happily playing with a kite, but of his future – walking his daughter down the aisle and the joy of becoming a grandfather 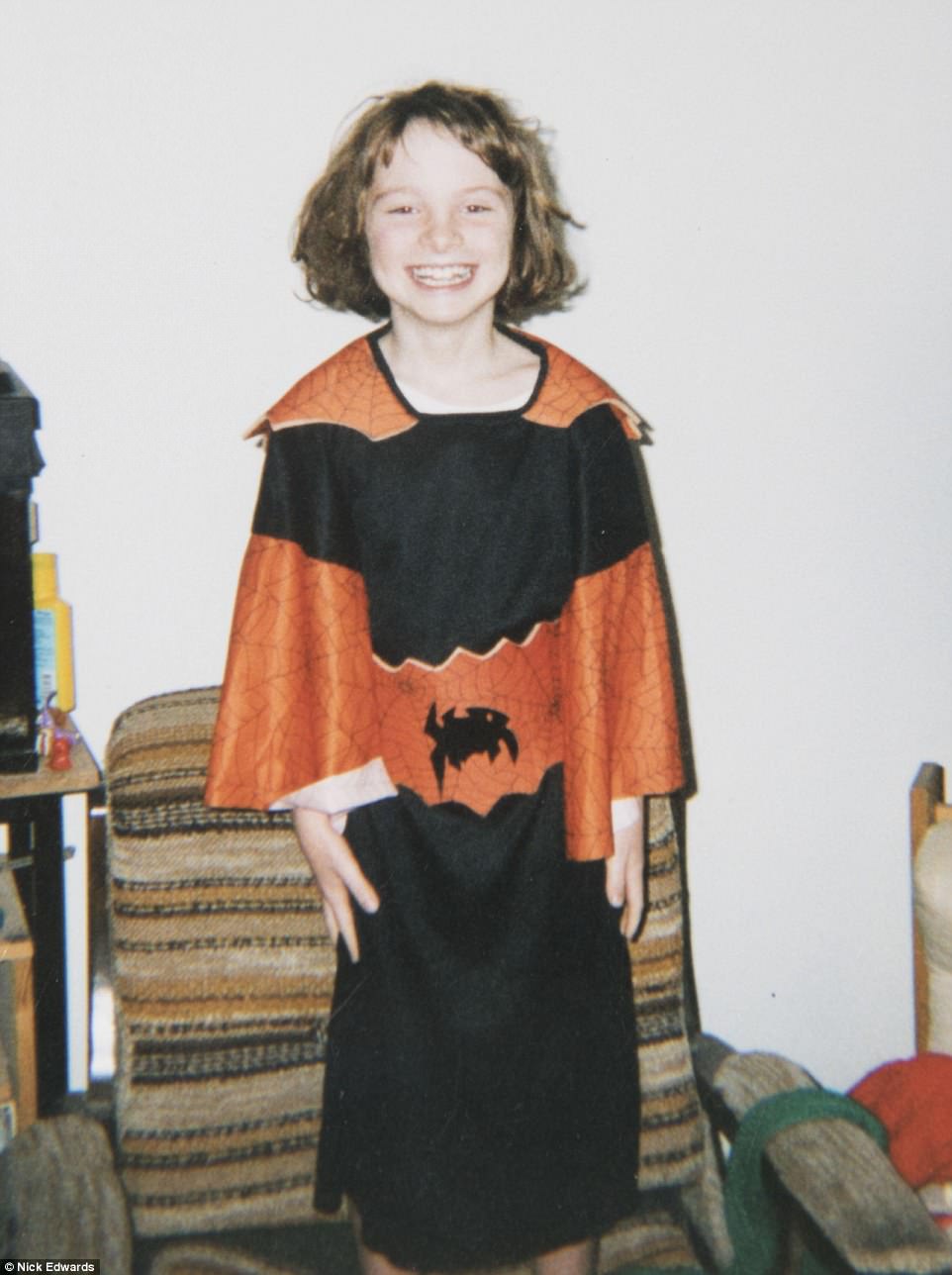 Mr Lionnet finds comfort in looking at old pictures of his beloved only daughter Sophie growing up. He says that father and daughter were very close and that he was looking forward to her returning to France after working as a nanny in London 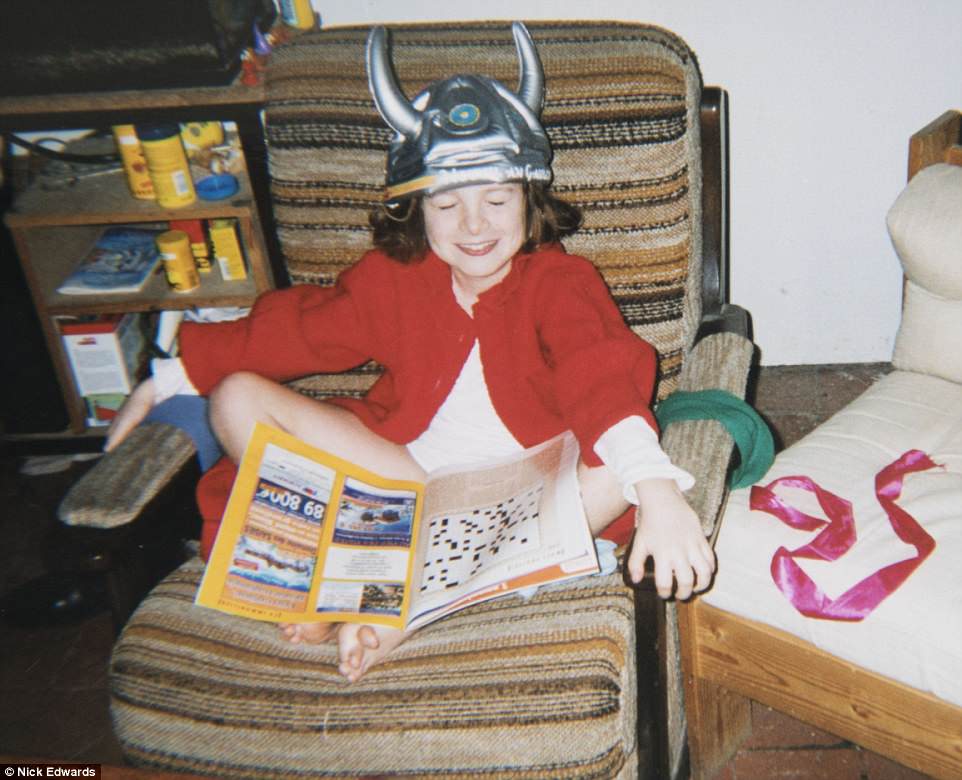 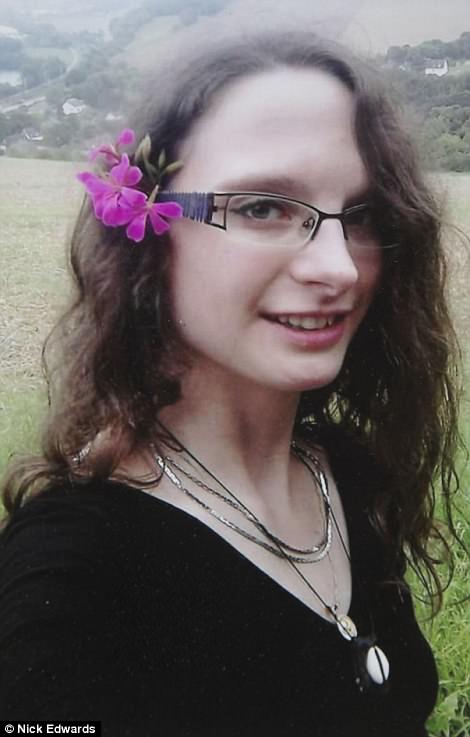 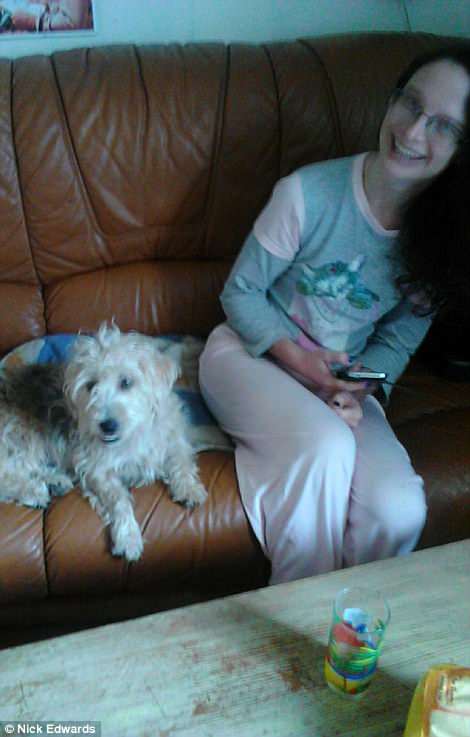 ‘If we didn’t see each other every week it was because of my work or because she wanted to do something. It was not a big deal. We were there for each other. She loved children and playing with animals.

‘She studied childcare at school. But she had trouble finding a job. So, when this opportunity came up in London we thought it was a good thing. 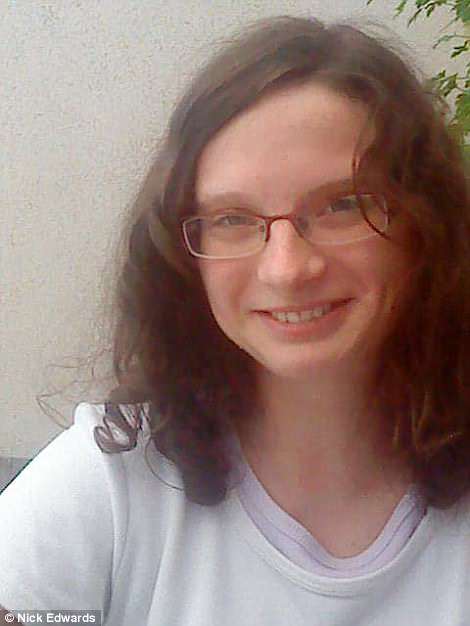 ‘Sophie came to see me before she went to London. She was happy.’

The young Frenchwoman set off for London in July 2016. Despite a meagre salary of just £50 per week, Sophie told her family she was looking forward to her foreign adventure.

Unable to top up her French pay-as-you-go mobile phone in the UK, the young nanny could not keep in regular contact with her family.

But 14 months after she left home she would be dead.

‘She also wrote to me. She sent me a lovely Father’s Day card.’

However, Mr Lionnet told how he received a knock at his door in the early hours of the morning in September last year to tell him his daughter was dead.

He told MailOnline: ‘It was four o’clock in the morning when the police knocked on my door. It was still dark. They would not give me any details about what had happened to Sophie, only that she was the victim of a violent murder. They told me to contact the [French] Ambassador in London.

‘I couldn’t believe it. I was in shock. I went to the boulangerie like I always do to collect the bread and then I went to work. 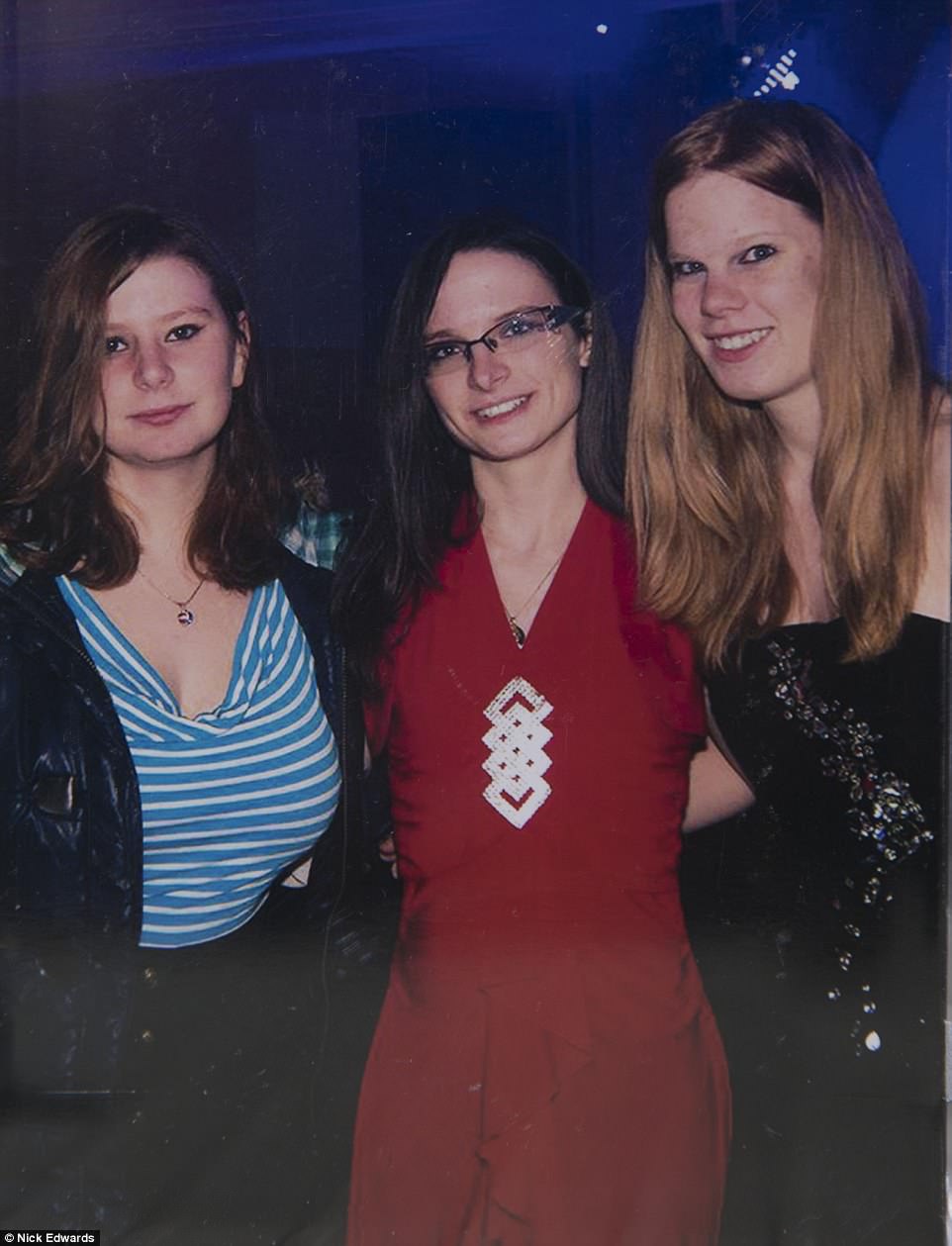 Sophie, with two friends before she left for London, stayed in contact with her father on Facebook. She had a pay-as-you-go mobile phone, but couldn’t make international calls on it. She sent her father a ‘lovely’ card for Father’s Day before she died 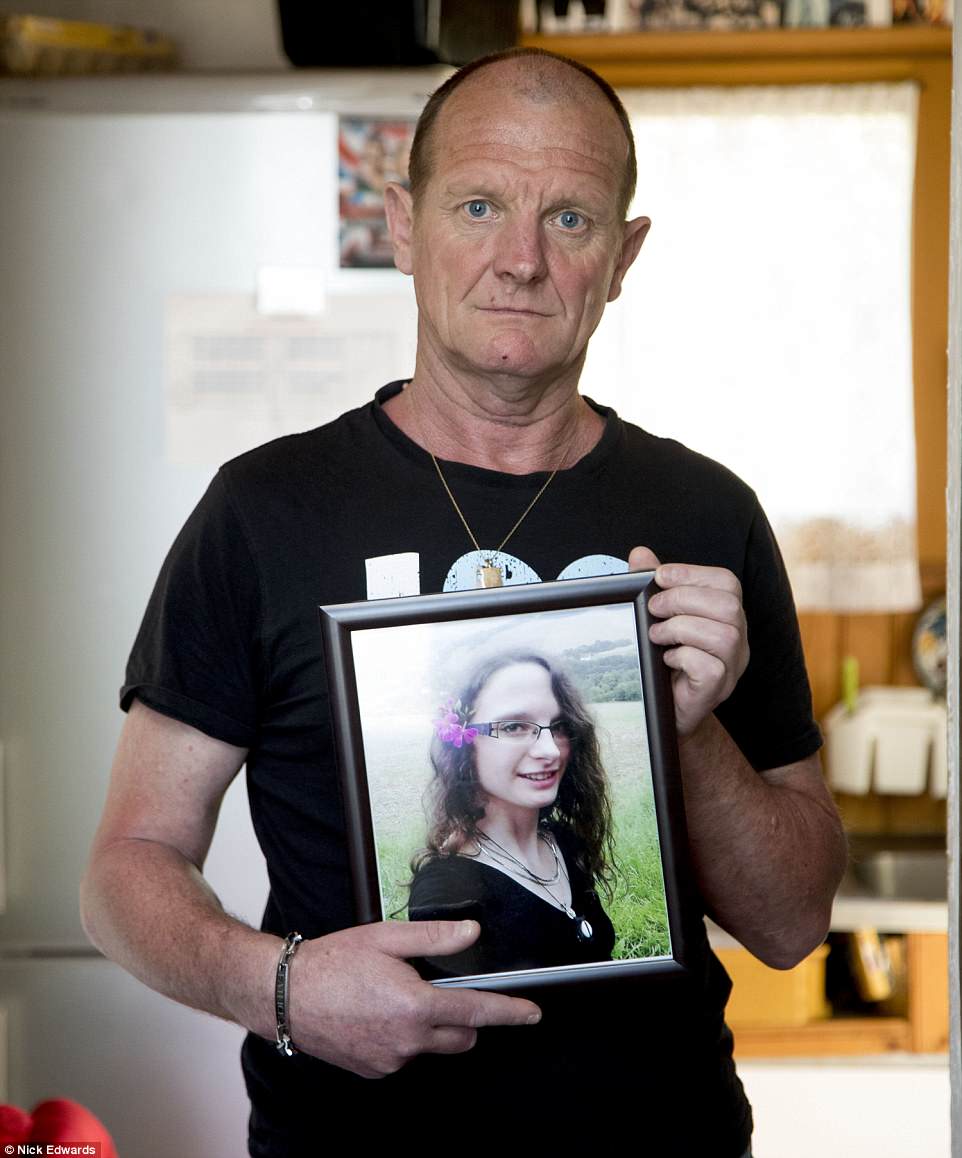 Mr Lionnet, a gardener, called the couple who murdered his daughter ‘savages’. ‘They have not only stolen the life of my only child, so brutally and without remorse, they have also stolen my sleep, my happiness, my piece of mind, my future,’ he added

‘I told a couple of colleagues that my daughter had been murdered. They couldn’t understand why I was at work. I was in shock.

‘I thought there must have been a terrorist attack. I prayed that they had got the identity wrong – that it was not Sophie.

‘Then that night I saw her face on the TV news. She was being treated like a piece of meat.

‘Her loss never leaves me. It’s worst at night. I went to see the doctor but I decided the best medicine was to go back to work. So I try to keep busy, it seems to help.’

Mr Lionnet flew to London to join his ex-wife Catherine before the verdict was reached today at the Old Bailey.

Speaking outside the Old Bailey she said: ‘It has been a nightmare. During the weeks of the trial I have had to listen to the terrible things that were done to Sophie. In the evenings I have to go on long walks to try to clear my head.

‘I walked along the banks of the Thames for hours, trying to forget about what I heard during the day.’