Heathrow’s chief executive has accused Border Force of ‘complacency’ over queues and called for the travel green list to be ‘massively’ expanded – as new figures show the airport lost nearly 6.3 million passengers in April, compared with two years ago.

Just 536,000 people travelled through the west London airport last month, representing a 92% reduction on the total for April 2019.

Currently, those who return to England from destinations in the green tier do not need to self-isolate – but are required to take one post-arrival PCR test.

Those arriving from somewhere on the amber list – which makes up most popular holiday destinations – must quarantine at home for 10 days and take two post-arrival tests.

The ban on overseas leisure travel from England will be lifted on Monday as part of the next easing of coronavirus restrictions.

But Heathrow chief executive John Holland-Kaye has criticised the Government’s decision to only put a handful of countries on its green travel list – and he accused Border Force of ‘complacency’ over claims that long queues are ‘inevitable’. 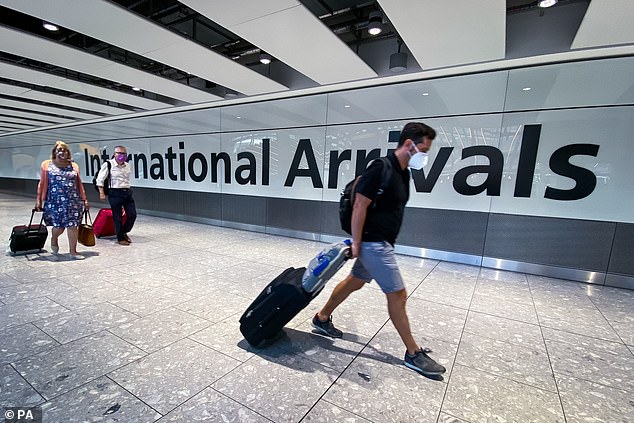 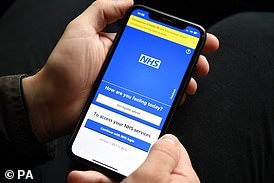 Holidaymakers who have been fully inoculated against Covid will be able to use the NHS smartphone app as a vaccine passport from Monday.

Once Britain’s foreign travel ban is lifted on May 17, Downing Street said those going abroad could show the app upon arrival to prove they have had two vaccine doses.

Those without smartphones are being urged to avoid calling their GP for help. Instead, they should ring 119 to order a letter confirming their vaccination status.

Official guidance from the Government published online states: ‘‘You can access your Covid-19 vaccination status through the free NHS App from May 17.

‘You can access the app through mobile devices such as a smartphone or by tablet.

‘Proof of your Covid-19 vaccination status will be shown within the NHS App. We recommend you register with the app before booking international travel.

‘Demonstrating your Covid-19 vaccination status allows you to show others that you’ve had a full course of the Covid-19 vaccine when travelling abroad to some countries or territories. A full course is currently two doses of any approved vaccine.’

Rules vary widely from country to country on international travel – but many are set to allow quarantine-free holidays for tourists who can show they have been vaccinated.

The app, developed by NHS Digital and NHS England, was originally designed to allow people to book appointments, repeat prescriptions and see their full medical records.

Mr Holland-Kaye said: ‘The Government’s green list is very welcome but they need to expand it massively in the next few weeks to include other low-risk markets such as the United States, and remove the need for fully-vaccinated passengers to take two expensive PCR tests.

‘Border Force’s claims that ”long queues in immigration are inevitable” smack of complacency. They are completely avoidable if ministers ensure that all desks are staffed at peak times.’

Border Force director-general Paul Lincoln warned on Friday that arriving passengers must accept there will be increased delays, and it could take up to 15 times longer to process people than before the pandemic due to extra checks being carried out.

The comments come after Boris Johnson raised hopes that an end to Covid measures may be sight, as he suggested social distancing could be scrapped completely by next month.

The Prime Minister unveiled the return of ‘sensible hugs’ as he gave the green light for close friends and family members in England to embrace once more from May 17 – after months of forcibly being apart.

He also suggested Britain’s Covid nightmare could be over by June 21, saying that even rules such as one-metre plus could be removed from that date onwards.

But he refused to pick-up the pace of the easing of lockdown, instead insisting that the Government would need to assess the current raft of changes before implementing more.

As of Monday groups of six or two households will be allowed to meet indoors for the first time in months.

Overnight visits will also be allowed, while outdoors the limit will rise to 30 in the most significant loosening yet.

Staycations can also get properly up and running, with hotels and B&Bs that do not have self-catering facilities permitted to open – as well as cinemas and theatres if audiences wear masks.

The government has decided the risk is now low enough that social distancing can be left more to ‘personal choice’ – meaning that while people are urged to be ‘cautious’, hugs are allowed at private gatherings.

However, despite the very low infection rate and stunning vaccine rollout, social distancing rules will still be maintained at bars and restaurants.

Together with a requirement for table service indoors, the hospitality industry warned it is more a ‘psychological opening rather than an economic one’ and many venues will still struggle to make ends meet.

Advice to work from home where possible will also stay in place.

Among other elements of the changes from next week, the much-criticised cap on the number of mourners at funerals will be lifted, while up to 30 people will be allowed at weddings and other life events.

Caribbean islands ‘likely to be added to Green List next month’ – as travel bosses say Greece, Italy and Spain are also safe because less than 1 per cent of arrivals from there test positive for Covid

A host of Caribbean islands are likely to be added to the Government’s quarantine-free ‘green list’ next month.

The nations that could be added in June are the ‘near misses’ for Friday’s list of just 12 countries and territories, the Telegraph reported.

Islands in the Caribbean such as Antigua, Barbuda, St Kitts and Nevis are reporting close to zero infection rates.

Another territory likely to be added to the updated list is the British Virgin Islands, which has had just 216 infections and one death since the pandemic began.

It comes as figures showed less than 1 per cent of arrivals from European holiday hotspots such as Greece, Spain and Italy are testing positive for Covid.

Analysis of NHS Test and Trace data by the Mail reveals around 0.8 per cent of arrivals from Greece over the latest four-week period tested positive for the virus.

But despite the similar rates, Portugal was the only major European hotspot to make the Government’s quarantine-free travel ‘green list’ last week.

Travel chiefs last night said the figures proved it was safe for ministers to expand the list to include more of Europe when foreign holidays restart next Monday. 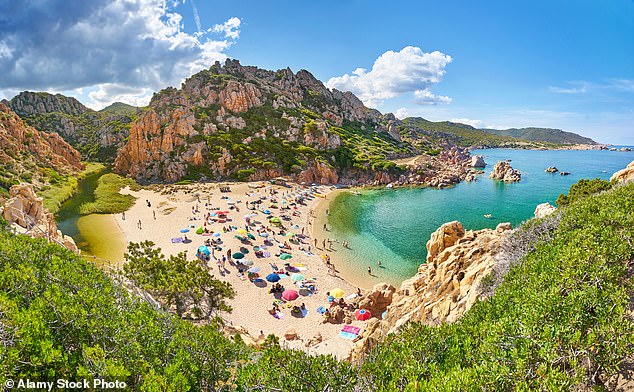 A host of Caribbean islands are likely to be added to the Government’s quarantine-free ‘green list’ next month. It comes as figures showed less than 1 per cent of arrivals from European holiday hotspots such as Greece , Spain and Italy are testing positive for Covid, NHS data shows. Pictured: Costa Paradiso Beach, Sardinia

Thanks to their low infection and variant rates, Fiji, the Cayman Islands, Grenada, Finland and Malta are also said to have been on a shortlist for inclusion on Friday’s ‘green list’.

The news that just 12 destinations were ranked green when the list was unveiled on Friday sparked a backlash from industry bosses.

Greek tourism minister Harry Theocharis said: ‘We consider Greece is at a very good status regarding the epidemic at the moment and every week it is getting better and better. This is what the data shows.’

He also hit out at UK ministers for not treating Greece’s islands, where vaccination rates are higher, differently to the mainland, adding: ‘Britain could have taken a different approach for those islands.’

Rodi Kratsa, governor of the Ionian islands region, which includes holiday hotspots Corfu and Zante, said: ‘The decision of Great Britain not to include Greece in the announced green list and to enforce quarantine to travellers returning to England is unjustifiable.

‘Greece has proven credibility and efficacy in managing the pandemic crisis, and so has the region of Ionian islands, a region that is loved by British travellers.

‘I am sure Britain will very soon change this decision.’

Since February, anyone returning from abroad has been required to take two tests after arrival on days two and eight, while quarantining at home or in a hotel for ten days. 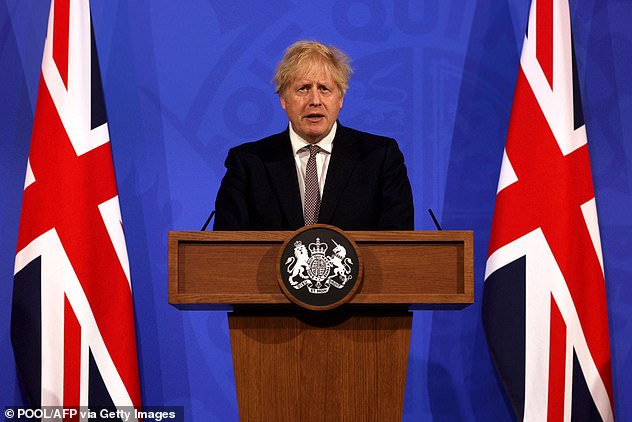 Travel chiefs said the figures proved it was safe for Government (pictured: Boris Johnson) to expand the list to include more of Europe when foreign holidays restart next Monday

The NHS Test and Trace data shows that of 3,823 people who took tests on day two after arriving from Spain between March 26 and April 22, the latest period available, just 26 tested positive.

Of 3,036 people who travelled from Italy, 13 tested positive, while five of 635 arrivals from Greece had the virus.

The data provides a snapshot into the risk of importing infection from each country, which also have similar vaccination rates.

EasyJet chief executive Johan Lundgren said: ‘We do not believe the Government’s decision to limit the green list to so few countries is justified and this evidence from the Mail shows that, even at times of high Covid in Europe, travel was a source of relatively few cases.

‘With the huge success of the vaccination programme which is being used to open up the domestic economy, there is no reason why Britons should be denied the right to travel to their holiday favourites this summer.’

The criticism came as it emerged that free NHS lateral flow tests may not be approved for holidaymakers to take abroad with them.

Figures showed less than 1 per cent of arrivals from European holiday hotspots such as Greece, Spain and Italy are testing positive for Covid

It would mean travellers having to shell out for a pre-departure test before returning to the UK.

Ministers had proposed giving travellers rapid tests to take with them to cut the hassle and cost of arranging one in a foreign country.

But sources said there were concerns about validating the tests and their accuracy.

A Government spokesman said last night: ‘We have taken a cautious approach to our green travel list to protect the country and our vaccination campaign from the threat of Covid-19 variants.

‘The decision to add countries to the red, amber or green lists is made jointly by ministers, informed by the latest scientific data and public health advice and taking into account a range of factors.’

*Portugal and Gibraltar go green on May 17