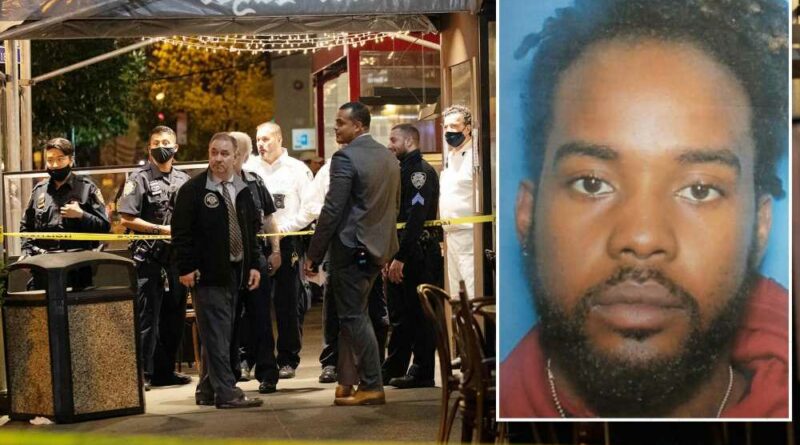 The man accused of opening fire outside Brooklyn’s famed Peter Luger Steak House had just been given the boot for fighting over women during a birthday party there, law-enforcement sources told The Post on Friday.

One of his shot victims is a 30-year-old tourist from California — who now has a bullet lodged in his spine, sources said.

Minutes before the Thursday night shooting, suspect Arkies Sommerville, 24, of Brooklyn had been escorted out of the steak joint by three fellow partygoers in an attempt to calm him down amid a verbal dispute over some women who weren’t at the gig, sources said.

But instead of cooling off outside the Williamsburg eatery, Sommerville kept arguing, and the other men finally gave up and began heading back inside, sources said.

That prompted Sommerville to pull out a silver, .38-caliber revolver and fire three rounds at them around 9:45 p.m., law-enforcement sources said.

None of the intended targets were hit, but two other men who were dining outside were struck by stray bullets.

Both victims were rushed to NYC Health + Hospitals/Bellevue in Manhattan, where the older man was treated and released and the younger victim was expected to undergo surgery, sources said.

While fleeing the scene, Sommerville — who was busted in 2014 for allegedly brandishing a fake pistol near a play area in a McDonald’s restaurant — passed a pair of 15-year-old boys, pointed the handgun at them and snarled, “What are you looking at?” sources said.

One of the teens called 911, sources said.

Cops who raced to the scene nabbed Sommerville on Bedford Avenue, about four blocks from the restaurant, sources said.

He was identified by the teens as well as a cousin at whom he allegedly shot outside Peter Luger, sources said.

The gun used in the steak house shooting was found in a local garbage can, sources said.

Sommerville was taken to the 90th Precinct, where he began “acting erratically” and “had to be sedated,” sources have said.

Following treatment at an area hospital, he was returned to the 90th Precinct on Friday and charged with two counts each of attempted murder, criminal use of a firearm and criminal possession of a weapon, cops said.

His arraignment was pending.

In a prepared statement, Peter Luger Vice President David Berson said the restaurant was “grateful to the NYPD for its work in apprehending this individual, and we will continue to cooperate in the investigation and prosecution of this crime.”

“The safety of our customers is paramount, and we are both sad and angry that someone would jeopardize the lives of innocent people as they were eating outside at our restaurant,” Berson added.