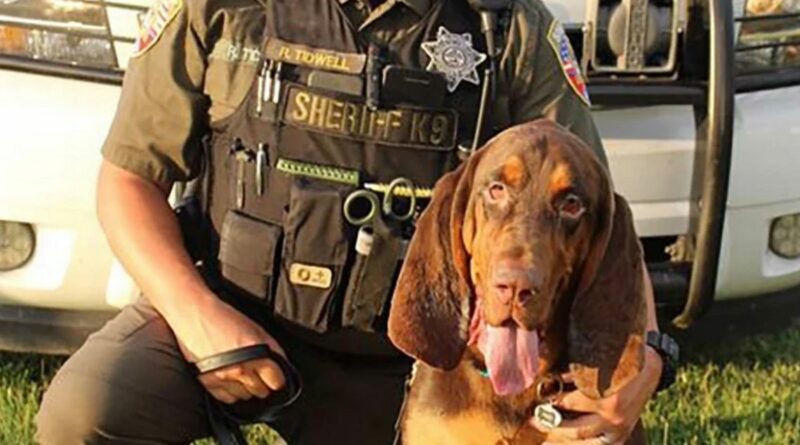 A hero police dog has found a missing six-year-old girl nearly a month after her father allegedly abducted her in Tennessee, US.

Bloodhound Fred tracked Kinzleigh Reeder and her father Nicholas to a barricaded abandoned shed with hardly any food or water.

They had been using a bucket as a bathroom weeks after her disappearance on May 26 in Dekalb County, Mail Online reports.

Kinzleigh ran up and hugged Fred after he discovered them in the back of the shed behind blankets hanging from a makeshift clothesline.

She had previously been removed from her father's custody after they were found camping out under a bridge in rising waters in March.

Officers from Rutherford County Sheriff's Office "obtained an item belonging to the father and allowed Fred to smell it", helping the bloodhound track down the six-year-old.

In a statement, the sheriff's office said: "They traveled to the home and released Fred who followed a foot path from the home to a burn pile, a truck and an outbuilding.

"He sniffed the door and door knob, then sat down indicating he found the father."

Kinzleigh immediately greeted Fred with a big hug and he licked her face after the brave rescue, and the dog was rewarded with chicken and pizza crusts.

His handler said: "I praised him and loved on him. I pulled the chicken reward out of my pocket.

"He ate the chicken and wanted to meet other people as if to say, 'Look what I've done'."

DeKalb County sheriff Patrick Ray said the girl was found with her father in the outbuilding which "was barricaded and the windows had been covered up with metal".

He told People : "There was no ventilation and air conditioning inside the small outbuilding. There was barely any food or water for the child.

"The outbuilding had a strong ammonia smell where the two had been urinating and defecating in a five gallon bucket."

The father was arrested on one count of child abuse and neglect and he also had warrants for failure to appear and custodial interference, police said.

The girl was released into the custody of Tennessee Department of Children's Services.

The father was previously arrested for child abuse and neglect for the incident under the bridge in March after he drove his Nissan Rogue off road where it got stuck in the creek.

The daughter was placed into the temporary custody of a family member by children's service but the father was given approval to live at the same house after his release from jail.

The Department of Children's Services contacted law officials on June 21 after they were granted custody of the girl but could not find her.