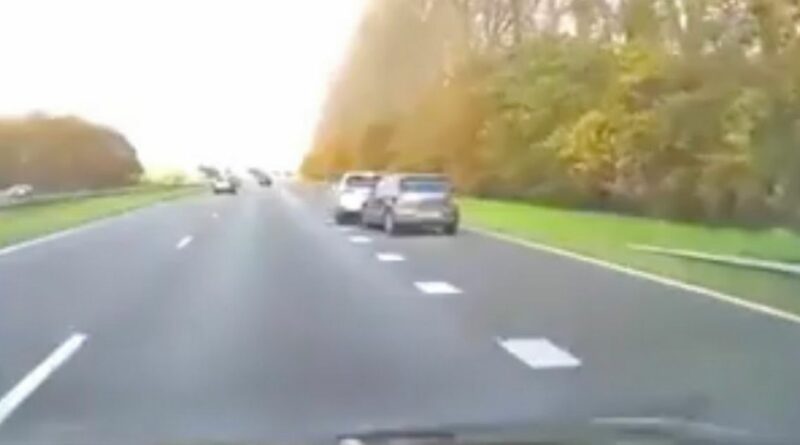 A quick-thinking driver sacrificed his car to save a woman who had lost consciousness at the wheel of her car.

Henry Temmermans, from Gelderland, the Netherlands, was praised for his actions when he pulled up in front the woman's car and used it as a shield to stop her from endangering herself and other road users.

His heroic actions were captured by a driver from behind and the footage was shared online.

In the clip, the grey Volkswagen can be seen detouring from the diversion road and onto the grass at a steady speed.

The car continues moving forward before reaching the road again as another car pulls over, trying to avoid collision.

Henry, who is driving a Ford hatchback, quickly cuts in front of the Volkswagen and stops his car in the hard shoulder right in front of the vehicle, forcing it to slam into his back and come to a halt.

"The car was swinging. I saw that in the corner of my eye," he recalled in an interview with local media RTV Nunspeet.

"[It] drove across the grass, at first I thought the motorist had missed an exit. But I soon saw that that was not the case because the car was driving straight ahead.

"I could see from my window that the car was uncontrollable because the woman was leaning over the wheel.

"That was awful to see. In order not to endanger the woman and other motorists, I accelerated a little more to get in front of her and stop my car in front of her. Luckily it wasn't a big blow."

Viewers called Henry a "hero" for bringing the woman to safety and offered to crowdfund his car repair works.

One wrote: "Respect! Henry, don't worry about the damage. I'd love to donate to help you reimburse the repairing fee."

Henry called the police after and the woman was taken to the hospital with broken ribs.

"I visited her in Harderwijk on Sunday morning with my wife," he added.

"Yes, she's broken ribs and it's painful, but she's so grateful that I did what I did, that she came out unscathed.

"It was almost self-evident for me, but I also understand that my action appeals to the imagination."