Industrialist, 90, is ‘pushed’ into the path of a train at Marble Arch before a commuter leaps down onto the tracks and throws him back onto the platform

A leading industrialist cheated death after he was allegedly pushed in front of a train by another man.

Sir Robert Malpas, 90, was left lying on the tracks after the apparently unprovoked attack.

But the former Eurotunnel chairman was saved by a heroic bystander who leapt down and threw him back on to the platform ‘like a sack of potatoes’.

The rescuer, Riyad El-Hassani, 24, said the pair came ‘inches from death’ as a train thundered towards them at a central London Underground station. 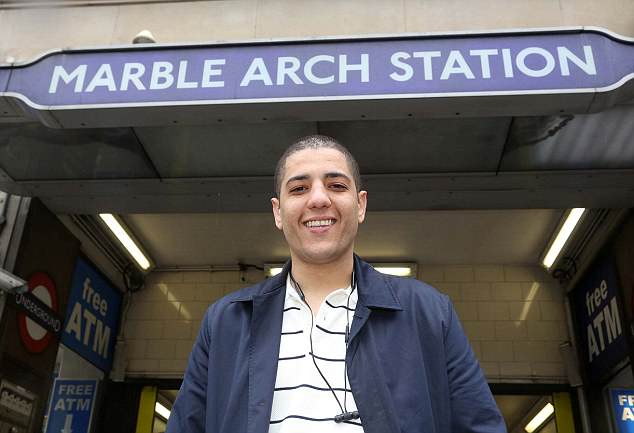 Rescuer, Riyad El-Hassani, 24, said the pair came ‘inches from death’ as a train thundered towards them at a central London Underground station

‘As I approached the Tube line I could hear panicking, screaming and running,’ he said.

‘I thought it was a terrorist attack. As I ran, I saw an elderly man in the middle of the underground track.

‘It was at least 1.5-metres deep and I could see the train coming very quickly. I barely stopped to think and jumped down on to the track. It saved the man’s life.

‘I threw him on to the station platform like a sack of potatoes. As I turned to the left I could see the train coming near my face. 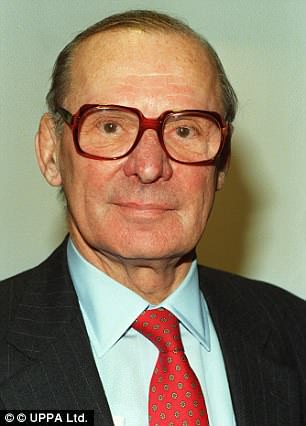 Sir Robert Malpas, 90, was left lying on the tracks after the apparently unprovoked attack

‘I ran to get out and it stopped another five metres further along. The man was bleeding a lot, there was blood coming from his face.

‘I started screaming for napkins, towels, anything that would help and people gave me tissues and all sorts of things to stop the bleeding. It felt like 15 minutes later that the emergency services and the police came.’

Sir Robert, who was knighted in the Queen’s birthday honours on his retirement, remains in hospital after suffering a nasty gash to his face.

He is a former captain of British industry, rising through the ranks to become chairman of chemicals giant ICI and Cookson, the materials technology group.

He served as a link between technology and business with roles on the Engineering Council and other advisory bodies.

Mr El-Hassani, who works at the luxury Dorchester Hotel in Mayfair, added: ‘I later found out the man involved was a Knight of the Realm.

‘I knew it was not a fall. People said there had been a scuffle with another man who was arrested.’ Yesterday, a 46-year-old man, from Leyton, east London, appeared in court accused of two counts of attempted murder.

Paul Crossley is also accused of trying to push a second man in front of a train at a neighbouring station. Mr El-Hassani said Tube bosses told him he was lucky not to be run down or electrocuted.

‘When I jumped down I put my right arm on the rail and got a shock. It injured me and has burnt off some skin,’ he said. ‘The Underground manger told me after that if I had put down my left arm I would be dead because that [line] carries the main current.

‘I could have been hit by a train, I could have been electrocuted.’ The incident caused panic with scores of people fleeing. Some feared a terrorist strike. One woman said: ‘It was incredibly scary, it really was terrifying – I’ve lived in London 11 years and never seen anything like this before.

‘The doors opened and pretty soon there was loads of screaming coming from the other platform and lots of people ran away from the commotion. I couldn’t hear anything there was so much screaming and the alarm went off on the train, which I assume is because someone had pulled it.’

London Ambulance Service confirmed they treated a man for a ‘head injury’ and took him to a ‘major trauma centre’.

During a short hearing at Westminster Magistrates’ Court yesterday, Crossley spoke only to confirm his identity and was remanded in custody. He will appear again at Blackfriars Crown Court on May 29.