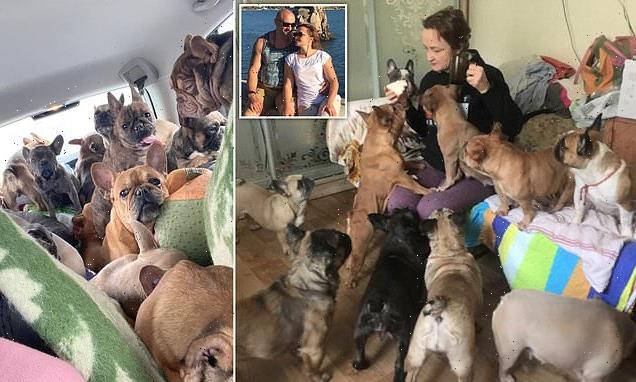 Hero woman saves FIFTY French bulldogs from Ukraine: Dog breeder drives 173 miles through war zone twice to save her beloved animals and bring them to Poland

Twenty French bulldogs have been pictured crammed in a car while their Ukrainian owner fled Russian bombs in her home outside of Kyiv – and even went back to the warzone to rescue 30 more ‘defenceless animals’.

Olena Lukash, 53, from Kyiv, said she ‘didn’t believe a war could start’ in her home country until Russian shells began to land near her house since the invasion on Ukraine began on February 24.

However, the 53-year-old soon realised she would have to save her ‘four-legged children’ from the terrifying threat as she decided to flee her home and head for Poland.

Photos show 20 of the dogs squeezed into the kennel owner’s Hyundai Tucson for the four-day drive, with the pooches blissfully unaware of the terror they were escaping.

Remarkably, after Olena and her husband Alexander left the dogs in Poland they then returned to their Russian-occupied town to rescue 30 more and then fled to Vinnitsa, 173 miles away from Kyiv.

The war launched by Russian President Vladimir Putin ground into its fourth week as his troops have failed to take Kyiv – a major objective in their hopes of forcing a settlement or dictating the country’s future political alignments. 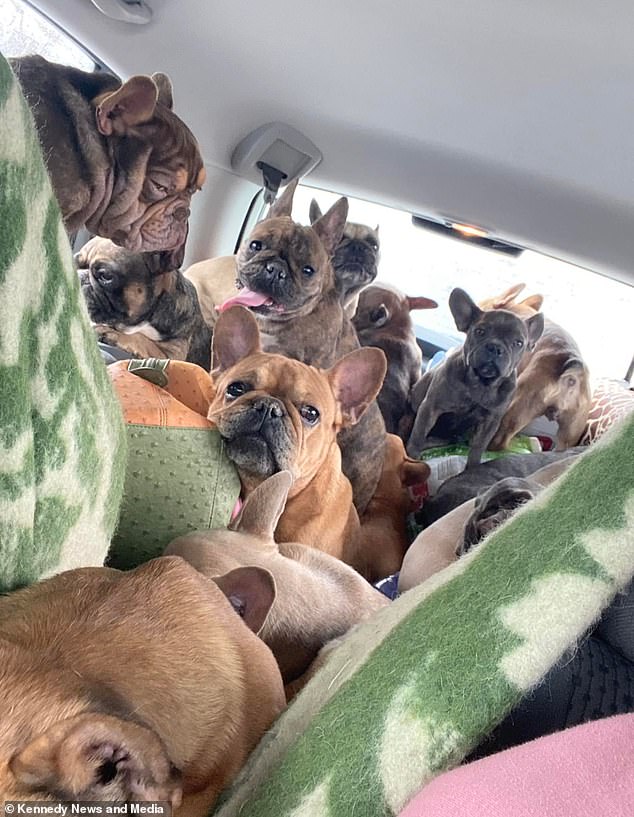 Twenty French bulldogs have been pictured crammed in a car while their Ukrainian owner, Olena Lukash, 53, fled Russian bombs in her home outside of Kyiv – and even went back to the warzone to rescue 30 more ‘defenceless animals’ 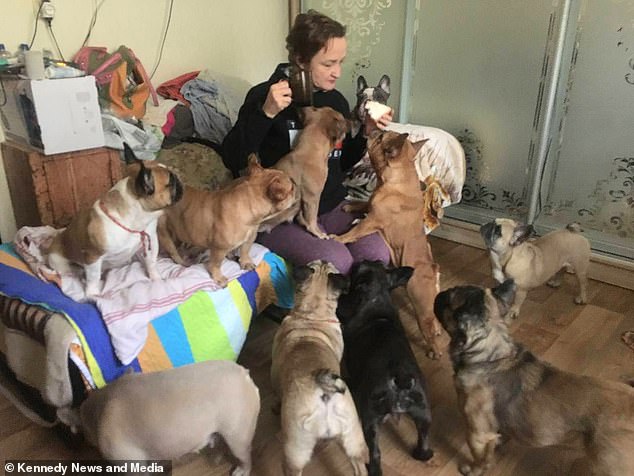 After Olena and her husband Alexander left the dogs in Poland they then returned to their Russian-occupied town to rescue 30 more and then fled to Vinnitsa, 173 miles away from Kyiv

Shelling was well underway in other Ukrainian cities on Friday – with Lviv, in the west of the country, the capital Kyiv, and Kharkiv, in the east, coming under fire.

Missiles and shelling struck the edges of Kyiv as well as Lviv, close to Ukraine’s western border with NATO countries such as Poland.

Next week, the 53-year-old breeder from Kyiv will face the same gruelling drive back to Poland, but Olena admits money is running out fast.

Olena, from Kyiv, Ukraine, said: ‘My dogs are my children. My job is my dogs. These are all French Bulldogs – my favourite breed for 30 years now.

‘I didn’t believe a war could start. The first week I thought that everything would end quickly, then shells began to fall near the house and I realised that I needed to save my four-legged children.

‘I took the first batch of dogs [10 dogs and 10 puppies] to Poland on March 9. The drive took me four days. There is a lot of traffic on the roads. 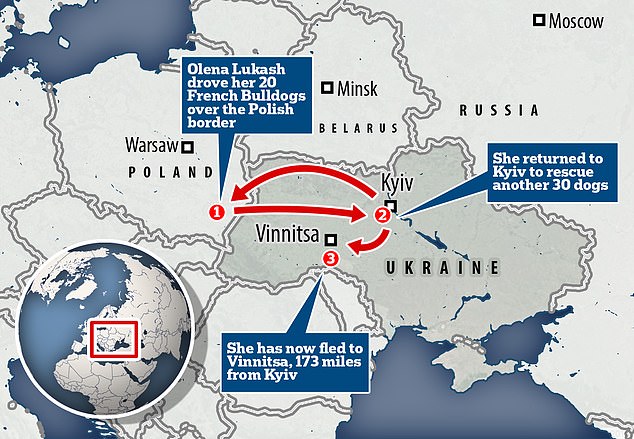 ‘I returned home when our village was occupied by Russian troops and took out the rest of the dogs and puppies [20 dogs and 10 puppies].

‘Now we are 300km away from the hostilities but I plan to take all my dogs to a safe place in Europe.

‘I love my dogs very much. I am ready to do a lot to save the lives of defenceless animals. I have strength and doing for this.

‘They are obedient and I am strong. I manage. Most importantly, we are all together and safe.’ 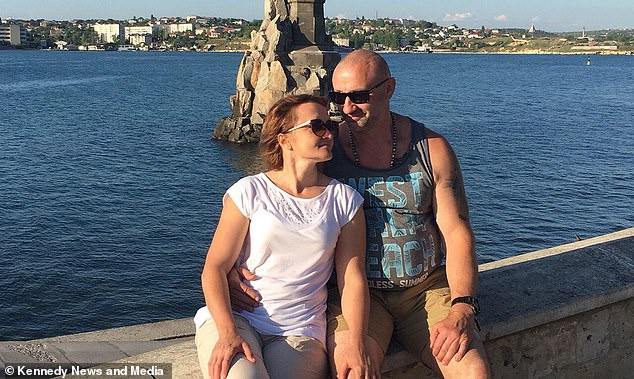 Next week, the 53-year-old breeder from Kyiv will face the same gruelling drive back to Poland, but Olena admits money is running out fast. The couple face a £378 (₴14,699 Ukrainian hryvnia) bill each week just to feed the dogs (Olena pictured with husband Alexander)

Olena is now in Vinnitsa in central Ukraine with the remaining dogs but claims they need money for food, medicine and fuel to continue their rescue mission.

Olena said: ‘I am with dogs in Ukraine, the city of Vinnitsa, with my friend. We need funds for food, medicine for dogs and fuel for the car to continue on our way.

‘Thousands of people write to me. I don’t even have time to read everything.

‘All American friends are generally silent – they do not want to help.

‘So far I have returned to Ukraine once. I need to do two or three more trips.

‘I have never counted how much I spend on dogs, but I think that [£378] a week would be enough for me to feed them all. 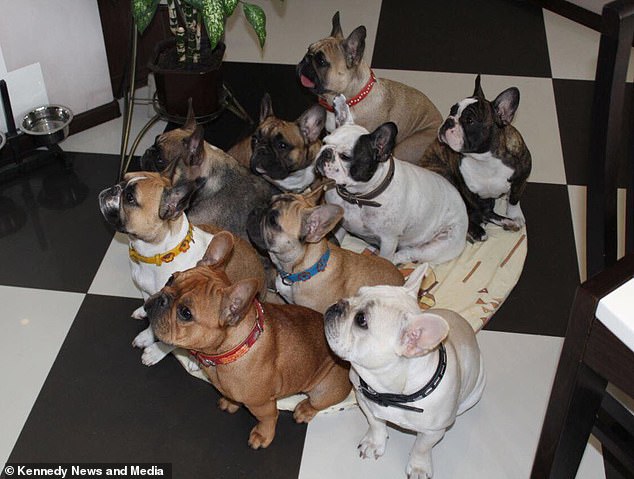 The married animal lover claims she will continue to rescue other dogs as soon as she gets her to safety, even forming groups across neighbouring countries to ensure rescued dogs find a safe long-term home

‘It is impossible to count on medicines and assistance because this all happened spontaneously. Gasoline is very expensive now.

‘I need to raise money for the long haul and find families for my puppies.’

The married animal lover claims she will continue to rescue other dogs as soon as she gets her to safety, even forming groups across neighbouring countries to ensure rescued dogs find a safe long-term home.

Olena said: ‘First I have to provide a safe place for my dogs in Europe then I will help other dogs from Ukraine.

‘We have already created groups and selected people to deliver animals from Poland and Romania throughout Europe, but they also need financial assistance for fuel.

‘It is a lot of work and I have very little energy now.

‘Without my husband, I would not have coped with this situation.’

Olena is remaining in Ukraine for the time-being, while a total of 3 million people have fled the country since the invasion began last month, the UN has reported.

Attacks on her home town near Kyiv have continued as the Russian troops continue to try to take hold of the Ukrainian capital.

Vladimir Putin’s efforts to meet his major objective to taking Kyiv has continued with strikes on the capital and Lviv having taken place in the early hours of Friday.

The dividing line is currently drawn around 15 kilometres from Kyiv, where Russian troops are still trying to surround the capital in a slow-moving offensive.

Meanwhile in the south eastern city of Mariupol, hundreds of people are feared trapped under rubble of a theatre that was bombed by Russia.

Evacuees have told of the ‘hell’ they have been subjected to, after 130 people had been rescued but hundreds still remain unaccounted for.

They could possibly be buried under rubble in one part of the bomb shelter and cannot be evacuated because the rescue services have been destroyed by Russian troops.

Ukrainian politician Serhiy Taruta wrote of the disaster on Facebook: ‘No one understands. Services that are supposed to help are demolished, rescue and utility services… are physically destroyed. A lot of doctors have been killed.

‘This means that all the survivors of the bombing will either die under the ruins of the theater, or have already died.’

Survivors of the siege told of how people are being left to bleed or burn to death in the streets because doctors cannot reach them or the hospitals have been destroyed.

Bodies have been covered with thin layers of soil in makeshift burials while the city is being attacked and are limited on resources. 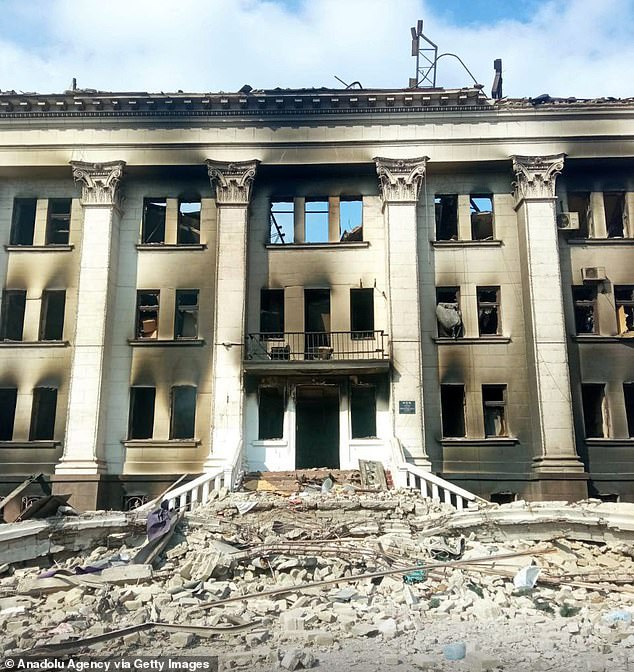 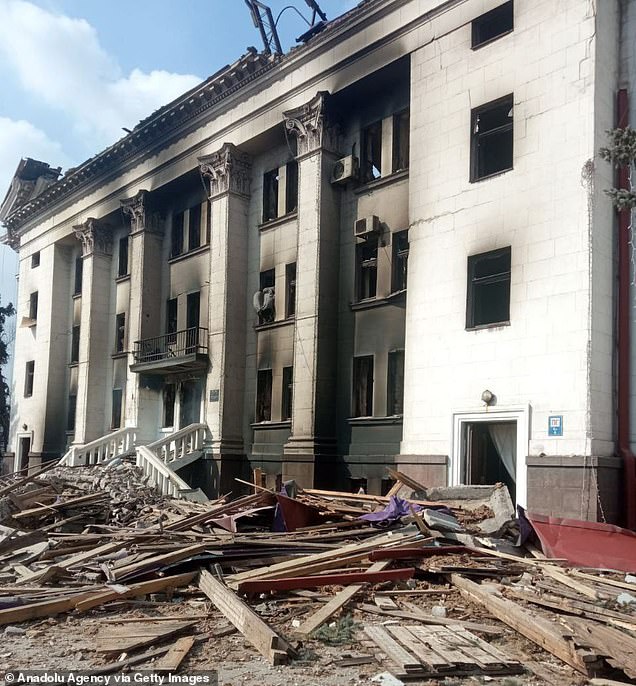 Rescuers are trying to dig through the rubble to get to the bomb shelters, but the city’s mayor warns the building is still being shelled meaning work is slow and ‘very, very dangerous’

Readers of Mail Newspapers and MailOnline have always shown immense generosity at times of crisis.

Calling upon that human spirit, we are now launching an appeal to raise money for refugees from Ukraine.

For, surely, no one can fail to be moved by the heartbreaking images and stories of families – mostly women, children, the infirm and elderly – fleeing from Russia’s invading armed forces.

As this tally of misery increases over the coming days and months, these innocent victims of a tyrant will require accommodation, schools and medical support.

All donations to the Mail Ukraine Appeal will be distributed to charities and aid organisations providing such essential services.

In the name of charity and compassion, we urge all our readers to give swiftly and generously.

TO MAKE A DONATION ONLINE

To add Gift Aid to a donation – even one already made – complete an online form found here: mymail.co.uk/ukraine

Via bank transfer, please use these details:

TO MAKE A DONATION VIA CHEQUE

TO MAKE A DONATION FROM THE US

US readers can donate to the appeal via a bank transfer to Associated Newspapers or by sending checks to dailymail.com HQ at 51 Astor Place (9th floor), New York, NY 10003