‘We pushed fear aside’: Heroic Southwest pilot recalls horror flight and reveals that she was not supposed to fly that day but traded routes with her husband so she could get to their son’s track meet

The hero pilot of Southwest Airlines flight 1380 has told how she was not afraid while making an emergency landing on April 17 after a passenger was partially sucked out the window.

In an interview with ABC’s 20/20 which will air in full on Friday night, Tammie-Jo Shults spoke alongside co-pilot Darren Ellisor about the incident which cost passenger Jennifer Riordan her life.

They were flying at 32,000ft when one of the Boeing 737-700’s engines failed, sending a piece of shrapnel flying into Riordan’s window.

Shults, 56, was not meant to be on the plane that day but had traded with her fellow Southwest pilot husband Dean so that she would be able to attend their son’s track meet in Texas.

‘It was really like any other flying day. I traded for the trip with my husband. I’m not trading with him anymore. 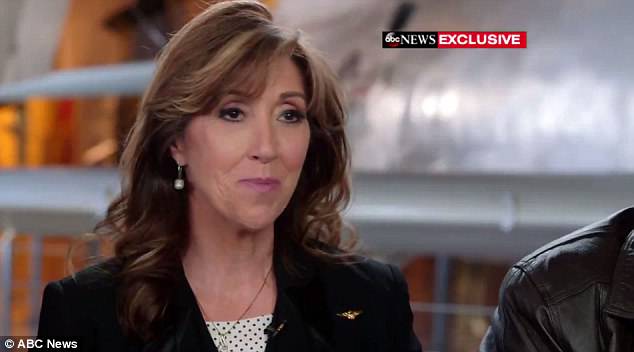 Tammie-Jo Shults, 56, revealed in an interview which will air on Friday that she was not meant to fly Flight 1380 but switched with her husband so she could get home to Texas for her son’s track meet

‘Dean, being the amazing husband he is, said, “You go to the track meet, I’ll switch and take your trip.” And so that’s why I was on the trip,’ she said.

Describing the harrowing sound the engine explosion made, Ellisor , 44, said: ‘We had a large bang and a rapid decompression.

‘The aircraft yawed and banked to the left, a little over 40 degrees, and we had a very severe vibration from the number one engine that was shaking everything.

‘And that all kind of happened all at once.’

Neither of them was scared. Rather than allow themselves to fret, they said they immediately reverted to what their training had taught them.

‘You just realize, obviously, we’re at the front end of the aircraft, so we’re in charge,. 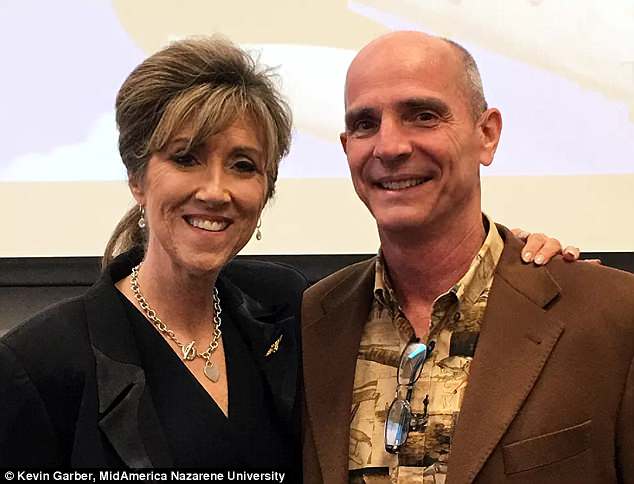 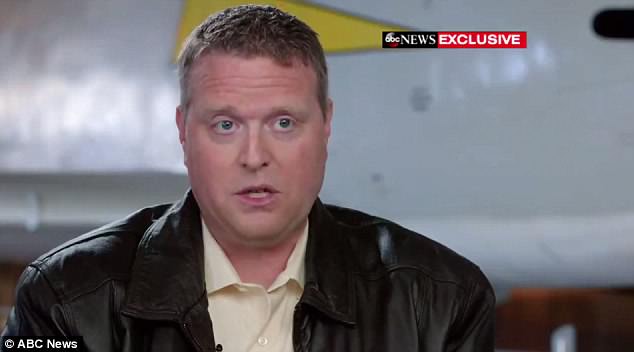 Co-pilot Darren Ellisor, 44, is a US Air Force veteran. He initiated the descent as Shults spoke to air traffic control after the engine failed at 32,000ft

‘I don’t remember anything other than starting to think through what the plan is. And it worked well,’ she said.

‘Your instincts kick in, you know, stuff that you’ve prepared for, you know, ever since you started flying … and this training just takes over.

‘Was there some of that fear? There probably was deep down, but I, you know, pushed it away,’ Ellisor added.

Shults said it thrust her back to her days flying in the Navy.

‘My first thoughts were actually, “Oh, here we go.” Just because it seems like a flashback to some of the Navy flying that we had done.

‘And we had to use hand signals [and some yelling], because it was loud, and it was just hard to communicate for a lot of different reasons,’ she said.

She and Ellisor were able to communicate despite the incredible noise in the cockpit.

At first, they thought it was a seizure of the engine’s air but when the oxygen masks began to drop, they realized something else was occurring.

‘It means the engine just stops rotating and spinning. And it was very disorienting to have all these things happen at once.

‘And I actually couldn’t make heads or tails of what was going on, you know, looking at the engine instruments, trying to figure things out.

‘It’s disorienting for a second before you grab everything and start flying again,’ Ellisor explained. 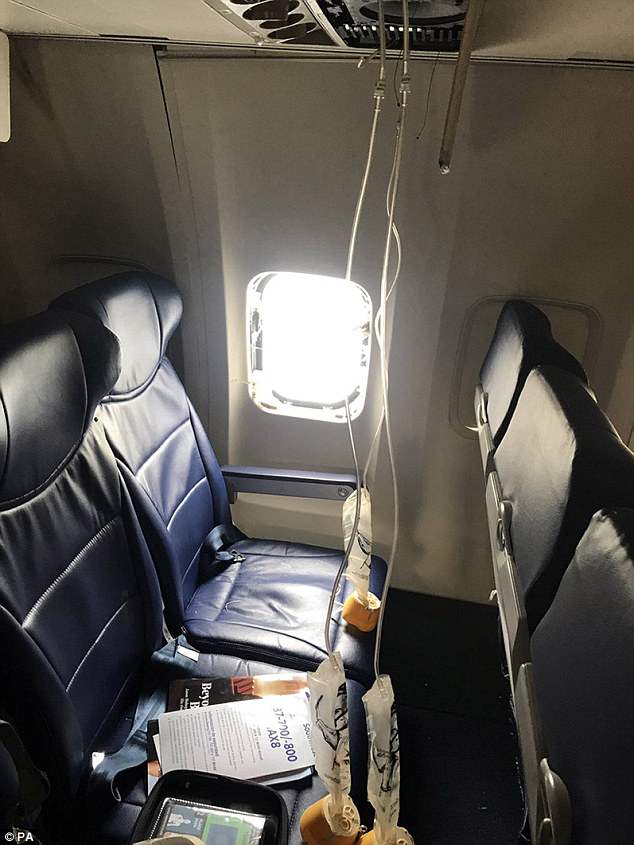 Neither of the pilots knew that the window had been blown out. When the oxygen masks fell, they had to communicate with hand gestures and by shouting 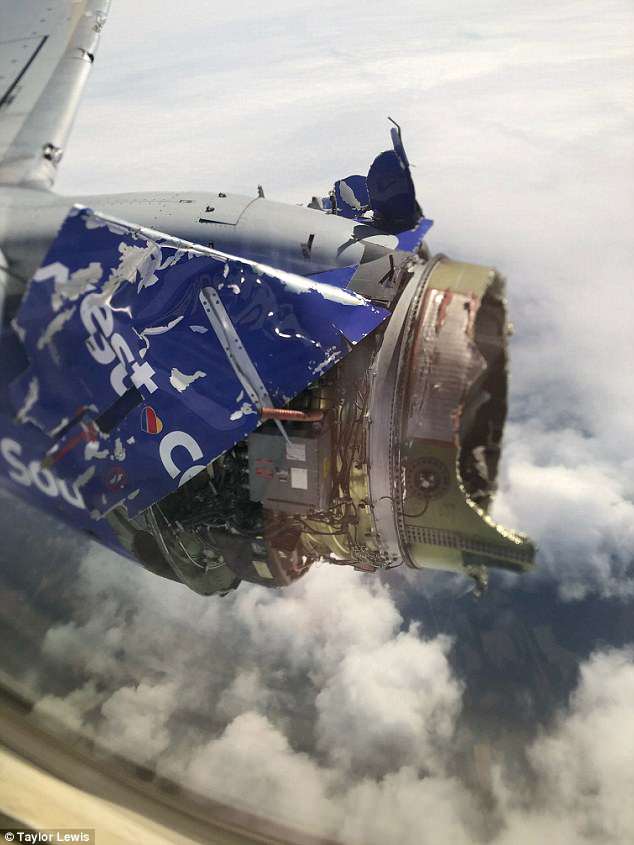 Both Ellisor and Shults said they thought there had been an engine seizure which is when the engine stops ‘rotating and spinning’. The loud bang triggered their descent but they were unaware of the smashed window and the fact that a passenger was partially sucked out of it until flight attendants told them

Shults and Ellisor said they would always have turned towards Philadelphia to make their landing but that they sped it up when they realized how urgent the situation was when the oxygen masks dropped. They were still unaware of what had happened to Riordan at this stage.

‘The seizure of the aircraft would not cause a rapid decompressions, so we knew that something extraordinary had happened pretty quickly. 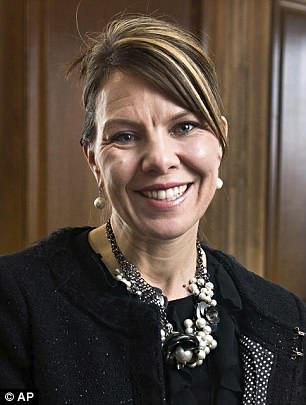 Jennifer Riordan, 43, was pronounced dead at hospital not long after landing. The upper half of her body was sucked out of the smashed window at 32,000ft

‘We would have turned to Philadelphia anyway and started coming down, we just wouldn’t have tried to get down so quickly. But getting down to richer oxygen was certainly an important task,’ Shults said.

As she spoke with the people on the ground, Ellisor took controls of the plane which she said he handled ‘beautifully’.

‘He followed the aircraft and let it stay in a nice controlled flight status. And it was a bit of a rough shudder until we slowed it down a little bit,’ she said.

They then switched back so that she could land it as is protocol.

‘At that point, we really just — because of the noise and different things — we had to be flexible and just use things that we had learned in previous training.

‘And we kind of just split the cockpit and I did flying and some of the outside talking, and he took care of everything else,’ she said.

Ellisor put his oxygen mask on first then Shults fixed hers.

‘We had some switchology to do to be able to communicate through the mask. And then it was really just back to flying. Aviate, communicate, navigate,’ she added.

It was not until they were almost on the ground in Philadelphia that they realized a passenger had been severely hurt.

‘[The flight attendants] let us know that we would need EMS immediately when we landed,” Shults said.

‘That’s when we decided it was time to go land,’ Ellisor said. 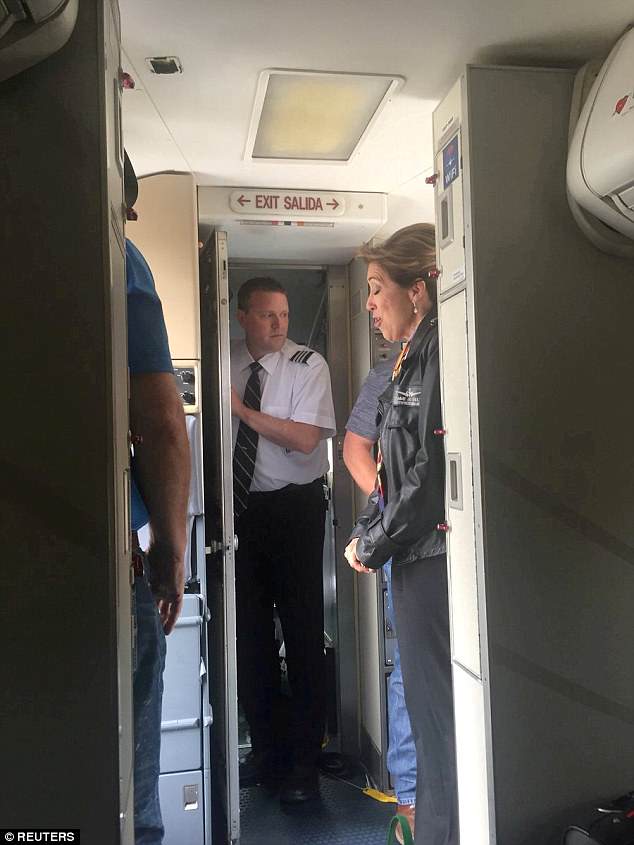 After making their emergency landing in Philadelphia, Shults and Ellisor got out of the cockpit to speak to the traumatized passengers. In their interview, they said they wanted to treat them as they would their own family 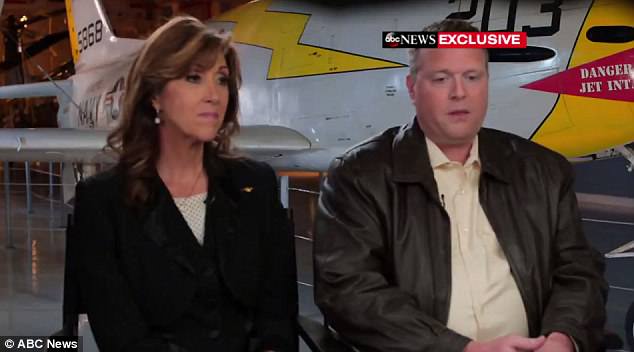 Friday’s interview is the first time the pair have spoken about the incident. They stayed away from the public eye in the days afterwards out of respect for Riordan’s family, they said

Because the window had been blown out, it mean they had to change the way they were flying so that a gush of air did not blow through the aircraft.

The landing was rough but not as rough as it could have been, Ellisor said.

‘It was an Air Force landing, not a typical, hard Navy landing.

‘But Tammie Jo, she did a fantastic job, considering the condition of the aircraft and the situation it was. She made a great landing,’ Ellisor said.

Once on the ground, the pair barely spoke to one another but finished their tasks then got out of the cockpit to speak to passengers, something Shults was widely credited for by all those on board who survived.

‘My mother had told me, “If I’m flying, I want to know what’s going on.” So I thought I would treat them like I would treat my own family,’ she said.

Ellisor stood at the front of the plane with EMT Andrew Needum and ranch hand Tim McGinty. He did not know it at the time, but the pair had pulled Riordan’s body back into the aircraft then tried to resuscitate her as he and Shults made their descent. 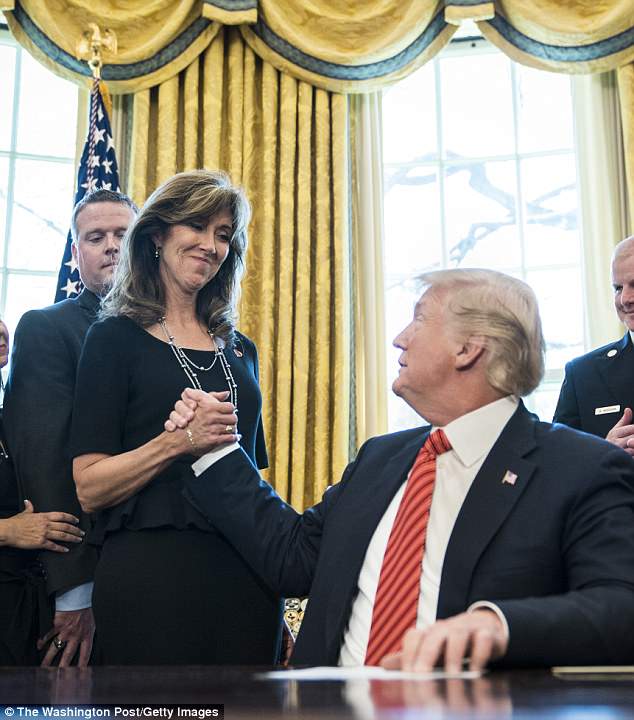 ‘So I knew those two gentlemen had done something extraordinary,’ he said.

Neither of the pilots spoke out in the immediate aftermath of the tragedy.

Shults said in the interview that she wanted to not be visible out of respect for Riordan’s family. The woman’s husband has been generous in his praise of the pilot and crew who tried to save her life.

Shults said she and the other Southwest crew sent him a card expressing their condolences in the days after the incident.

‘Hearing some of the things that her husband has said subsequently that just makes us think what a sweet and rich family they are.

‘We wanted to be respectful and let them have some time to mourn without us being public.’ 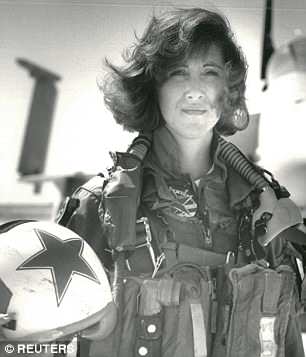 Shults was one of the first female pilots in the US Navy. She is pictured in 1992

After landing in Philadelphia, Ellisor got in touch with his wife to say that he was unharmed.

The pair had an emotional reunion by the time he made it home.

Shults’ son Marshall, who she had changed her plans for, gave her a less emotional response when she text him to tell him what had happened.

‘When I told [Marshall] that I’d landed single engine in Philly safe on the ground, his immediate text back was, “That’s why Southwest gives you two”.

‘So I didn’t get the sympathy you did,’ she joked to Ellisor.

The pair were welcomed to the White House last month along with other passengers and flight attendants from the flight.

They were given warm praise by President Trump during a meeting in the Oval Office.  He called their efforts ‘incredible’.

Ellisor and Shults had only met a day or two before the incident. Now, they said, they are bonded for life.

‘Going through something like this, it certainly galvanizes your personalities together and your friendship. I mean, we’ll be in touch the rest of our lives.

‘Even though he’s going to upgrade and be captain,’ Ellisor said.

‘It really was life-changing. I mean, because it’s not something that we’ve ever had happen before, and you know, almost certainly won’t happen again because the chances are just too astronomical.

‘So you have this surreal moment of going through it and working together to solve the problem.

‘And then you’re left to pick up the pieces once we land and move on. And you know, that’s something we’ll do together as a team and as a family and I’m happy that she was with me,’ he added.

In the days after the incident, as Shults and her husband stayed quiet on what had happened while the world’s feasted on information from the flight, her brother-in-law said she was considered by colleagues to be the best pilot they had ever known.

She was one of the first female pilots for the US Navy and is a mother-of-two.