The historic Veranda House Hotel on Nantucket Island, Massachusetts, was damaged Saturday after a huge blaze ripped through the building.

Firefighters received a report that the hotel, which is more than 338 years old, was on fire early Saturday, the Nantucket Fire Department said in a news release.

Fire officials rushed to help, entering the building without protective equipment, to ensure that no one was stranded in the inferno, the report said. Two people were found and guided out safely, the fire department said.

All hotel guests were evacuated. The fire department reported that no civilians were injured in the fire.

“The actions of the citizens and the Captain saved lives,” the report said.

As of 2:30 p.m. Saturday, firefighters continued to battle to flames. 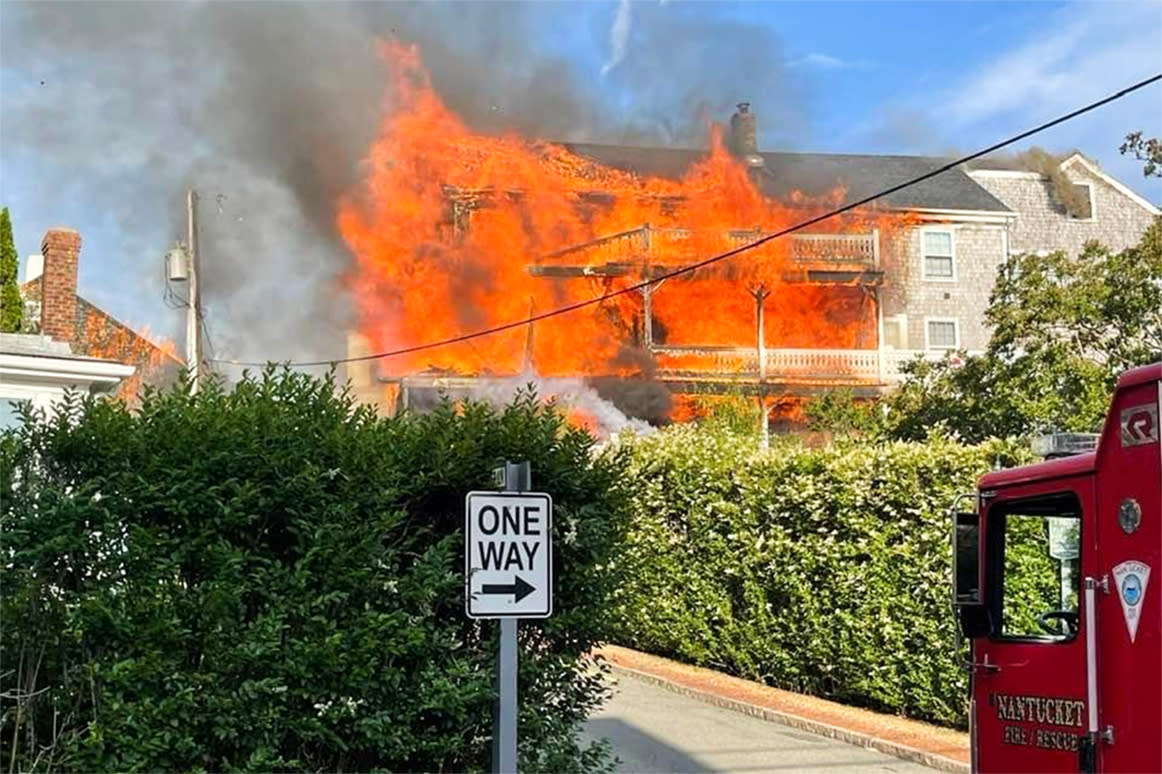 Two firefighters were taken to hospitals for suspected heat exhaustion, and another was transported for a back injury, the report said. An updated report Sunday said a fourth firefighter was also seen at a nearby hospital. Three of the four firefighters were released the same day. One was held overnight for observation, the release said, and discharged Sunday.

Video shows flames engulfing the building and dark smoke billowing up from the hotel. Two other buildings caught fire, the fire department said.

In a statement posted to its Facebook page, the Veranda House Hotel confirmed that all employees and guests had safely evacuated, and it thanked the fire department for its response.

“The Veranda House team is deeply grateful to the Nantucket Fire Department and first responders for their quick action taken during this incident,” the statement read.

The fire was mostly extinguished at about 8 p.m. Saturday— more than 14 hours after it began. Firefighters remained on the scene through the night into Sunday, according to the release.

“I would like to further state the heroic efforts of several community members including Patrick Marks, Jim McIntosh and off-duty Captain Nathan Barber (and I am sure I may be missing names) [who] saved lives on Saturday,” Nantucket Fire Chief Stephen A. Murphy said in the release Sunday. “They all entered into life threatening conditions in order to warn, rescue and remove people within the building. Their bravery will not go unnoticed.”

Officials have yet to estimate the cost of the damage to the Veranda House Hotel and the two additional building. They described “all of the buildings” involved in the fire as being “total losses.”

The Veranda House Hotel’s loss will be a blow to the island of Nantucket, according to The Boston Globe. The hotel was erected in 1684, The Globe reported, and it has hosted famous guests like Fred Rogers of “Mister Rogers’ Neighborhood.”

Officials said in the release Sunday that the property was last inspected on April 12, when officials found it had a functioning alarm system and fire extinguishers. Veranda House Hotel did not have a fire sprinkler system, which it was not required to have when it was built, officials said.

In addition to recognizing the firefighters, Murphy thanked Nantucket residents who have supported the efforts of officials fighting the inferno.

“Lastly to all the outpouring of water, Gatorade, food, and thoughts from the community, The Department members THANK YOU,” he wrote.