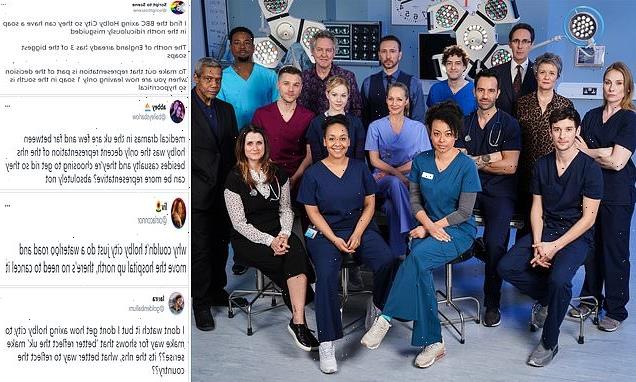 The BBC will scrap Holby City next year as it continues its drive to appear more northern, sparking a furious backlash among fans.

The long-running medical drama set in a fictional city based on Bristol has been filmed at the corporation’s London Elstree Studios for the last 22 years.

But the programme is now at odds with the BBC’s ‘Across the UK’ plan to move TV shows and staff out of London to kill off the idea of a so-called ‘southern bias’.

With three big soaps set in the south – the others being Eastenders and Casualty – Holby City was seen as the easiest to scrap as Casualty’s Cardiff base helped to fulfill the diversity directive.

The costs of producing Holby City will instead be used to fund two replacement soaps in the next three years; one set in northern England and another in either Wales, Scotland or Northern Ireland.

But the announcement left dedication fans of the soap furious, calling the move ‘short-sighted’ and warning that the diverse cast and storylines were going to be lost. 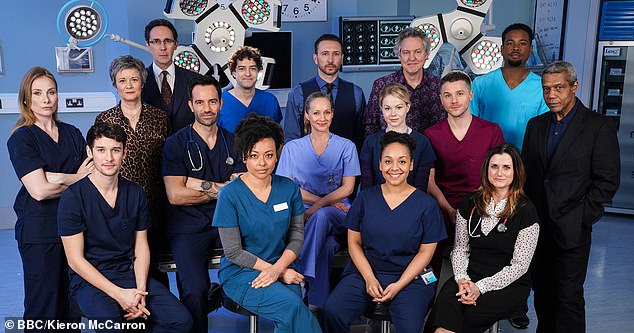 The BBC will scrap Holby City next year after 23 years as it continues its drive to appear more northern, sparking a furious backlash among fans 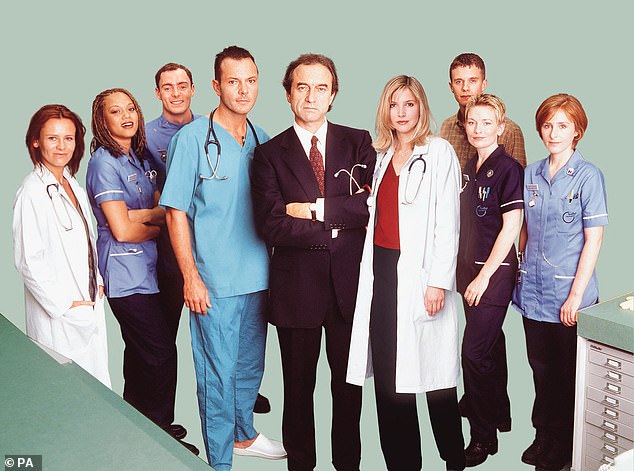 Premiere: The show – which airs weekly on BBC One – launched on January 12, 1999, as a spin-off from fellow BBC medical drama Casualty, which began in September 1986 [the original cast is pictured]

‘I find the BBC axing Holby City so they can have a soap in the north ridiculously misguided,’ wrote one fan.

They added that the north of England already has three of the country’s biggest soaps with Hollyoaks, set in Chester, Coronation Street in Manchester, and Emmerdale in Yorkshire.

They added: ‘To make out that representation is part of the decision when you are now leaving only one soap in the south is so hypocritical.’

Tobias Oliver added that Holby City already has big diversity credentials ‘championing the NHS, a show that had a history of strong roles for LGBT and BAME actors and could reflect all corners of the UK through challenging storylines.’ 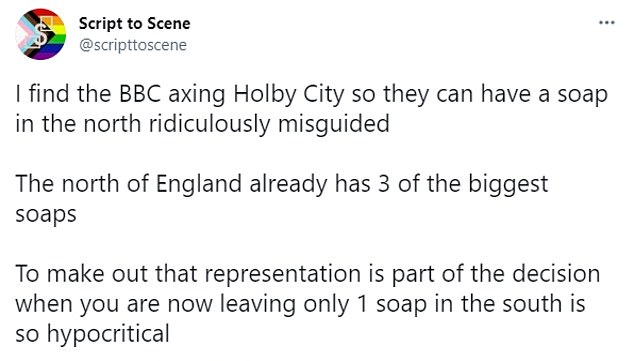 But the announcement left dedication fans of the soap furious, calling the move ‘short-sighted’ and warning that the diverse cast and storylines were going to be lost

It comes as a former veteran star of the show said the cast and crew had been left ‘reeling’ from the announcement which effectively gave them six months’ notice they were losing their jobs.

Hugh Quarshie, who played consultant Ric Griffin for 19 years, said he was ‘taken aback’ by the news.

‘My understanding is they only found out an hour before released to the press – so no one saw this coming,’ he told The Guardian.

Quarshie added that he was not sure if the show’s runners have considered turning the soap into ‘more like ER rather than Doctors’, but suggested they could have moved the production to the same studio as Casualty instead of scrapping it.

The BBC said in a statement: ‘We are incredibly proud of Holby City. But it’s with great sadness that we are announcing that after 23 years, the show will end on screen in March of next year.

‘We sometimes have to make difficult decisions to make room for new opportunities and as part of the BBC’s commitment to make more programmes across the UK. 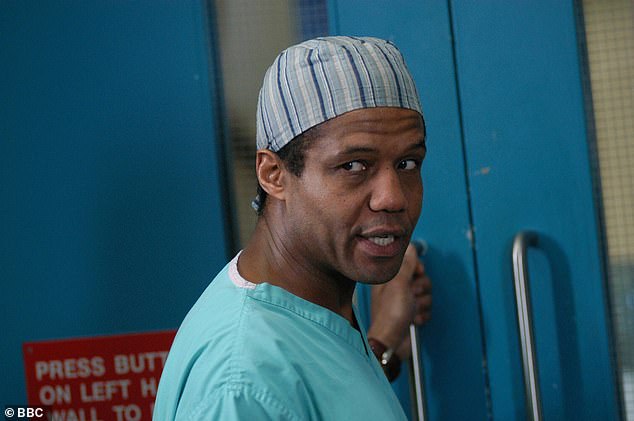 Hugh Quarshie, who played consultant Ric Griffin for 19 years on the soap, said he was ‘taken aback’ by the news and that the cast and crew members had ‘not seen it coming’ 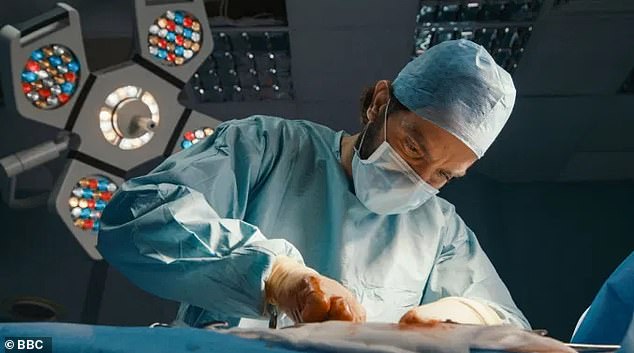 It’s been cut! The BBC insisted they will make sure the programme goes out ‘on a high’ [pictured Ramin Karimloo as Dr Kian Madani]

‘We have taken the difficult decision to bring the show to a close in order to reshape the BBC’s drama slate to better reflect, represent and serve all parts of the country.

‘We would like to take this opportunity to thank the amazing team at BBC Studios and all the cast and crew who have been involved in the show since 1999.

‘Holby has been a stalwart with audiences, delighting millions of viewers each week and winning hundreds of awards with a compelling mix of cutting-edge medical stories and explosive personal stories.’

The BBC insisted they will make sure the programme goes out ‘on a high’.

They added: ‘We look forward to working with the team over the coming months to ensure that when it ends, Holby goes out on a high.’

Fans were quick to express their disappointment at the show ending, with some questioning the reasoning behind the BBC’s decision.

One Twitter user said: ‘I genuinely think this is a poor decision. What can better ‘reflect, represent and serve all parts of the country than an #NHS hospital drama? 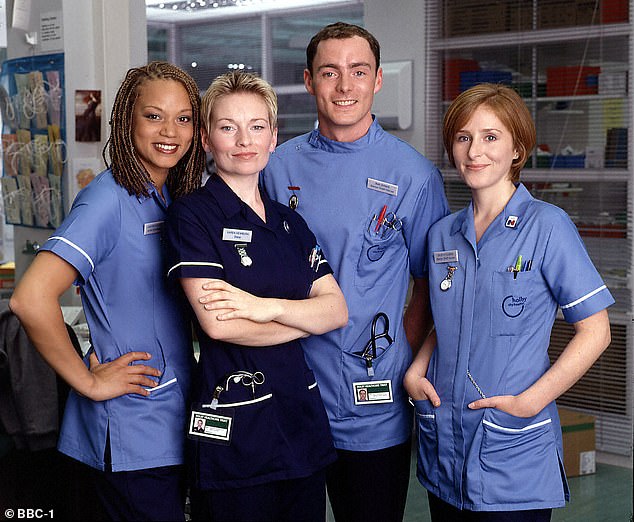 ‘Difficult decision’: The network have slated the medical drama to come to a conclusion on screen in March next year [pictured is a cast shot from 1999] 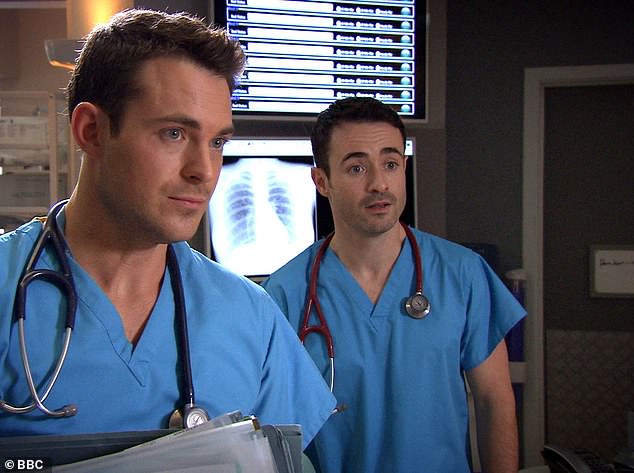 The BBC said in a statement: ‘We are incredibly proud of Holby City’ [pictured are stars Jules Knight and Joe McFadden]

‘Who has never been to hospital, never been ill? So many have experienced, been or helped or felt heard by issues covered by the programme.’

Another said: ‘Extremely shortsighted of @BBCOne to axe what is an incredibly popular drama!’

One fan wrote: ‘Holby City got axed? How are they gonna cancel a medical drama and say it doesn’t represent the UK? I am not okay about this.’

Another added: ‘Unbelievable, have watched Holby since it first started, out of all the total rubbish and reality programs they could get rid of! So sorry for all the actors and crew. So sad.’

And the likes of Adrian Edmondson, Patsy Kensit, Jane Asher, Sheridan Smith, Phill Jupitus, Johnny Briggs, Suzanne Shaw, and Anita Dobson have also guest-starred in the show over the years.

Star Joe McFadden, who played Raf di Lucca in the programme from 2014 to 2017, sent his well wishes to the cast and crew in wake of the news.

He wrote on Twitter: ‘Such sad news about the end of #HolbyCity – it kept so many people in work for so long. My thoughts are with friends in the cast and crew. (sic)’ 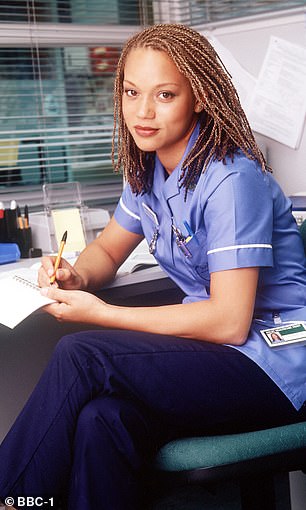 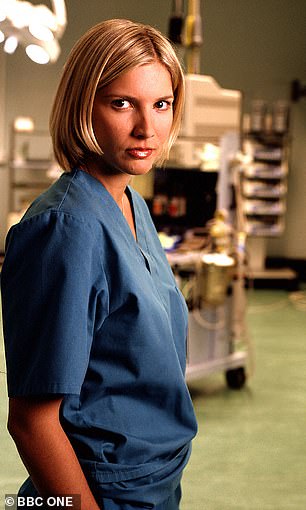 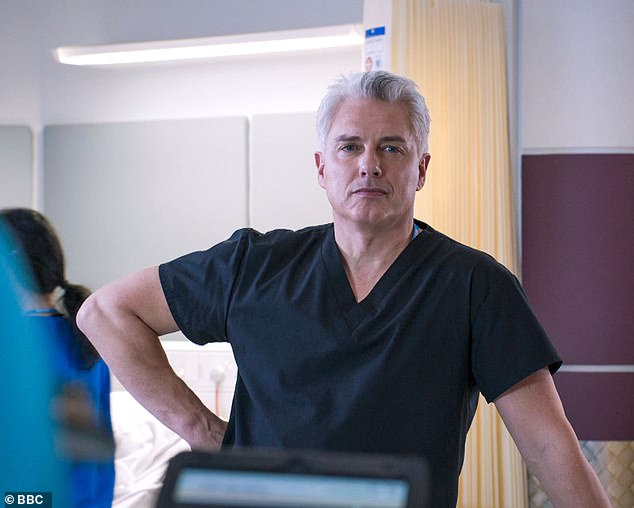 Guest star: John Barrowman appeared on the show in 2020 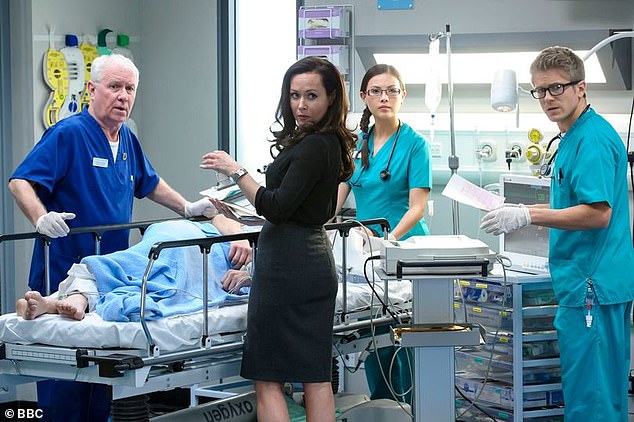 Crossover: Holby City exists in the same canon as Casualty, with the two series crossing over on occasion

George Rainsford – who plays Ethan Hardy in sister show Casualty – tweeted: ‘Thinking of our wonderful friends at our sister show #HolbyCity today. Filming all year round on a long-running drama attracts a particular type of person.

Former EastEnders actor Nitin Ganatra praised the show as well, posting: ‘Sad to see the end of a monumental and magnificent show like @BBCHolbyCity Big shame.

‘Thoughts go out to all the cast, crew and production team on the show. Will see you on another set no doubt. #staypositive #holbycity HOLBY CITY -WE LOVE YOU!!! (sic)’

His former co-star Davood Ghadami joined the cast of Holby earlier this year as Consultant Cardiothoracic Surgeon Eli Ebrahimi, after his EastEnders character Kush Kazemi was killed off; and he praised the show for being ‘a great big family, not a workplace’.

‘I’ve only had the privilege of being part of @BBCHolbyCity for a couple of months but its already very clear that its a great big family not a workplace. It will be sorely missed. Lets go out with a bang #Holby (sic),’ he penned.

One devastated fan has already started an online petition to keep the show on air. The supporter, calling themselves Mr Holby, wrote: ‘The pandemic has shown how highly the public value the NHS, and Holby City is an important representation of the work that the NHS does, and the issues the NHS and its staff and patients face.’

At the time of writing, the petition, called Don’t Scrap Holby City, has amassed more than 1,600 signatures.

Holby City has been nominated for over 100 awards, of which it has won six. The series has received five BAFTA nominations, winning on one of these occasions.

The show – which airs weekly on BBC One – launched on January 12, 1999, as a spin-off from fellow BBC medical drama Casualty, which began in September 1986.

Casualty, which exists in the same world as Holby City, remains on the air. It is the longest-running medical drama series in the world.