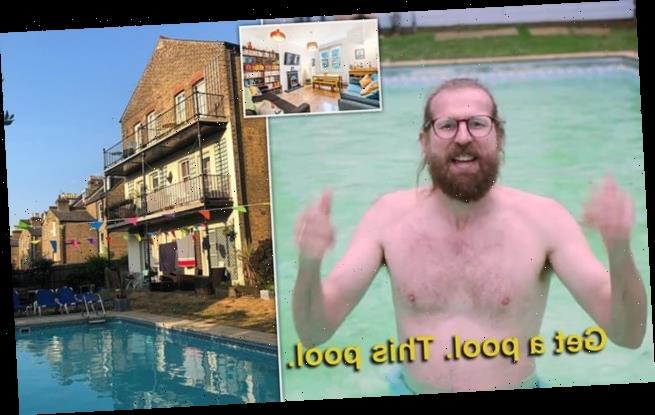 ‘Get a life. Get a pool’: Homeowner, 40, struggling to flog his £425,000 London flat before the stamp duty holiday ends takes matters into his own hands with hilarious video about his outside pool

A home owner struggling to flog his London flat before the stamp duty deadline took matters into his own hands with a hilarious promo video bragging about its outside pool – while standing in it.

Sanderson Jones’ 40th birthday weekend was ruined last week when he discovered buyers for his two-bed flat had pulled out at the last moment.

Eager to push through a sale, the ex-comedian recorded a quick-witted video that focused on the £425,000-listed property’s biggest selling point – even opening with the slogan ‘get a life, get a pool’.

It features father-of-one Sanderson addressing house hunters while stood waist-deep in the shared pool, professing it to be the only feature anyone should care about.

In other shots he’s perched on a beach hut-style shed explaining how the pool is exactly what’s ‘missing from your life’ this year, not a diet or even the house’s other highlights.

He says ‘pool’ every eight seconds on average during the two-minute skit, and even claims that when you move in people will ‘be able to tell that you’ve got a pool’ as it will give the owner ‘a certain je ne sais quoi’. 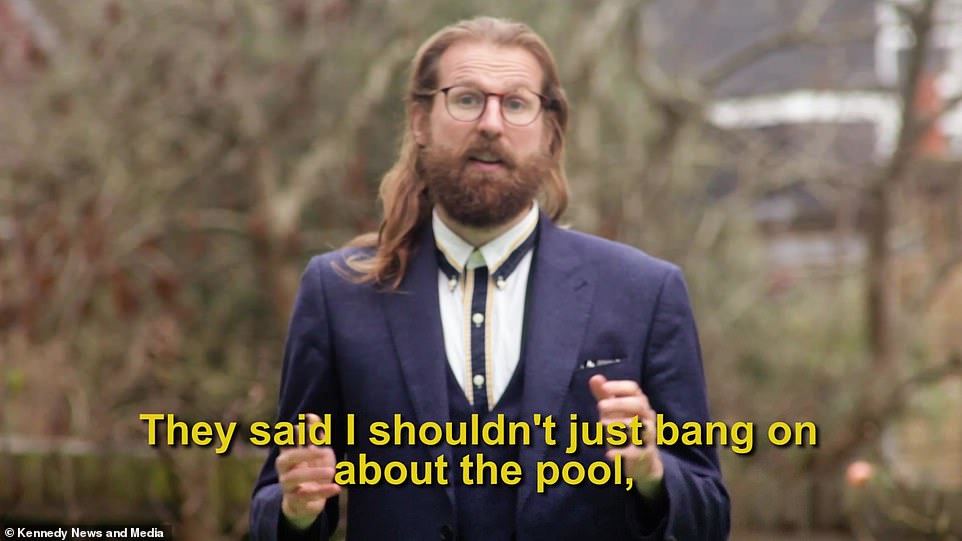 Home owner Sanderson Jones , 40, who is struggling to flog his East Dulwich flat in London before the stamp duty deadline took matters into his own hands with a promotional video bragging about its outside pool in a two-minute skit shared online 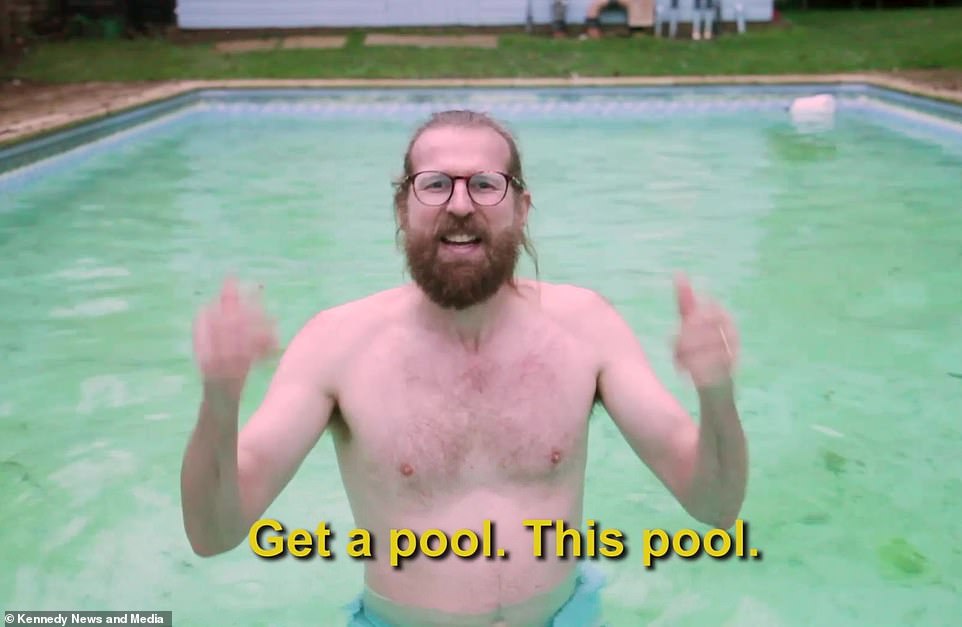 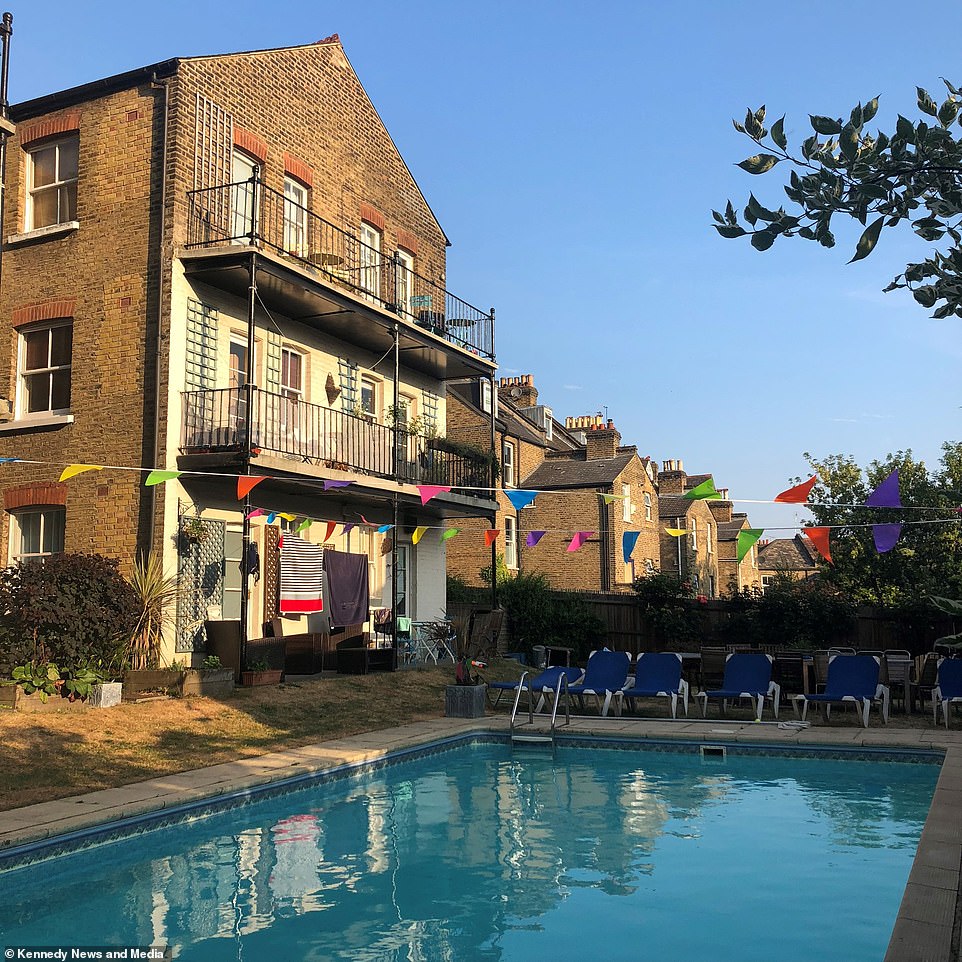 In one scene, while wearing just swimming shorts, the seller acknowledges that most advised him not to film in the winter as it will appear ‘cold’ – though attempts to dispute this while visibly shaking.

Sanderson posted the tongue-in-cheek video on LinkedIn on Wednesday and it’s since been viewed by more than 2,000 people – and just 24 hours later he already had an enquiry.

He’s explained the garden is ‘like being on holiday’, and claims he’ll be sad to leave despite planning to upgrade to a four-bed semi-detached property in East London.

Sanderson, from East Dulwich, South East London, said: ‘We had the idea of banging on about the pool and how it’s going to turn you into a better person. And to be honest, it has been great.

‘Particularly during lockdown it felt like we were on holiday. I think there will be other folk like us who go ‘yeah, it would be pretty cool to have that.’.

‘The reason we bought this place is because it had a pool. It was the first place we saw. Why wouldn’t you have a flat with a pool? 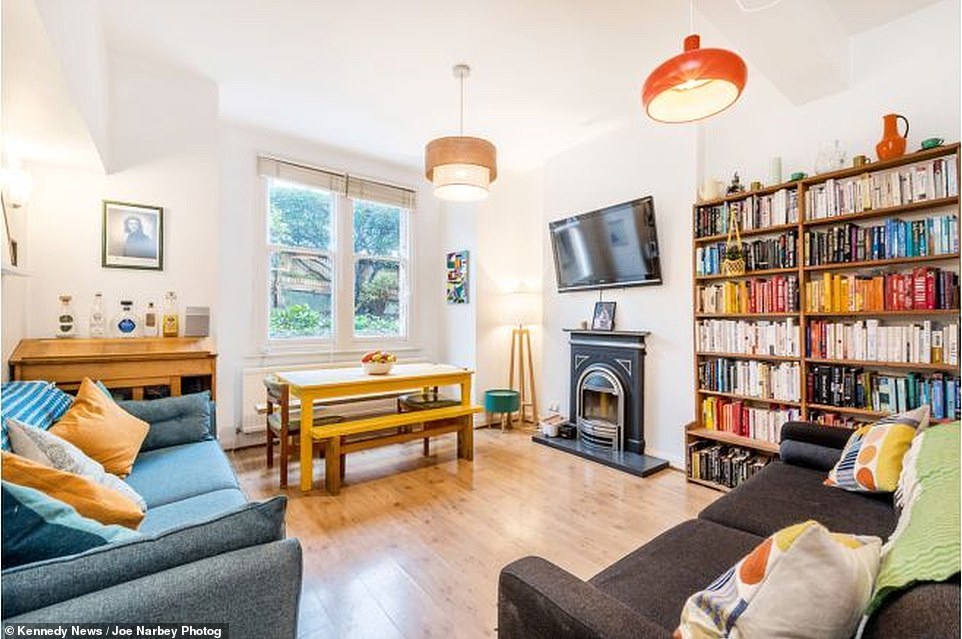 The £425,000 flat is situated in East Dulwich and is available to view on Purple Brick website. Pictured: the large lounge 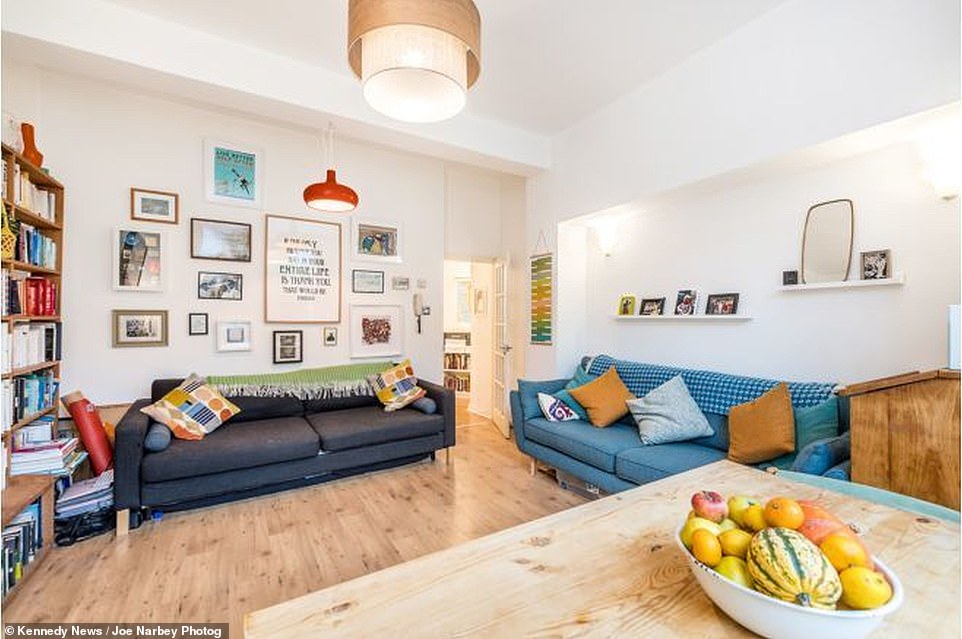 Although Sanderson jokes that the pool is the main selling point of the flat, it also features a spacious lounge area (pictured) 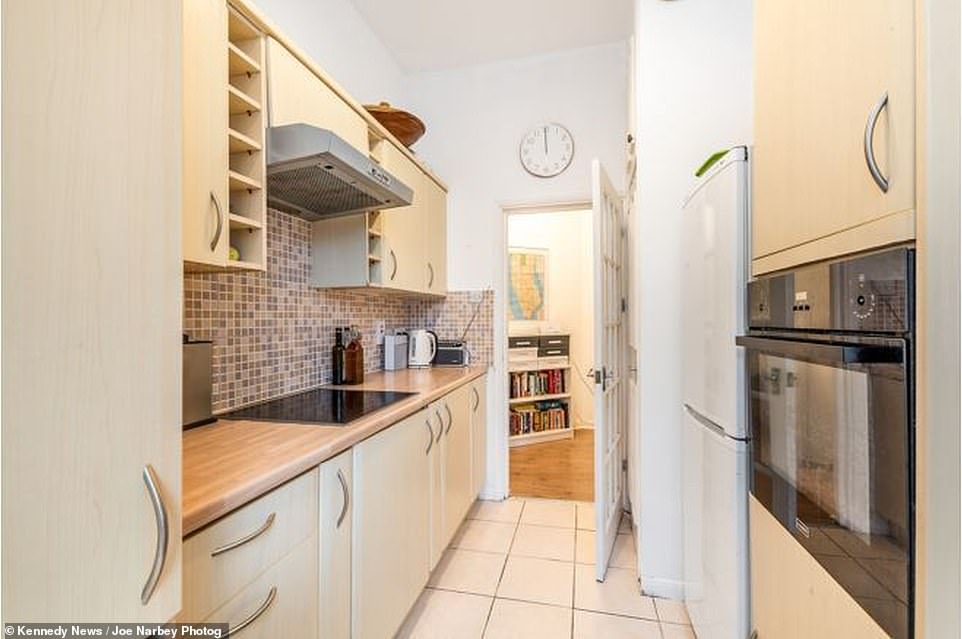 ‘There’s nowhere in London that’s got a community vibe like this, and because you’ve got to look after the pool you get to know the neighbours.

‘I could certainly feel for Leonardo Di Caprio filming Titanic because it was absolutely freezing. It’s a heated pool but it wasn’t being heated when we filmed it.’

When his original sale fell through, Sanderson acted quickly and contacted comedian pal Sam Nicoresti who helped write and record the video.

Sanderson and partner Imogen Moore-Shelley share the flat with their one-year-old Davey Jones, who he says has also enjoyed the pool by floating around with his parents.

The pair were disappointed when he got the email last week to say the flat’s buyer had pulled out after three months of trying to sell it, so he wanted to have more influence on the listing’s engagement.

Sanderson said: ‘It’s quite frustrating when you’re trying to sell a house and you just have to wait for people to come to you. 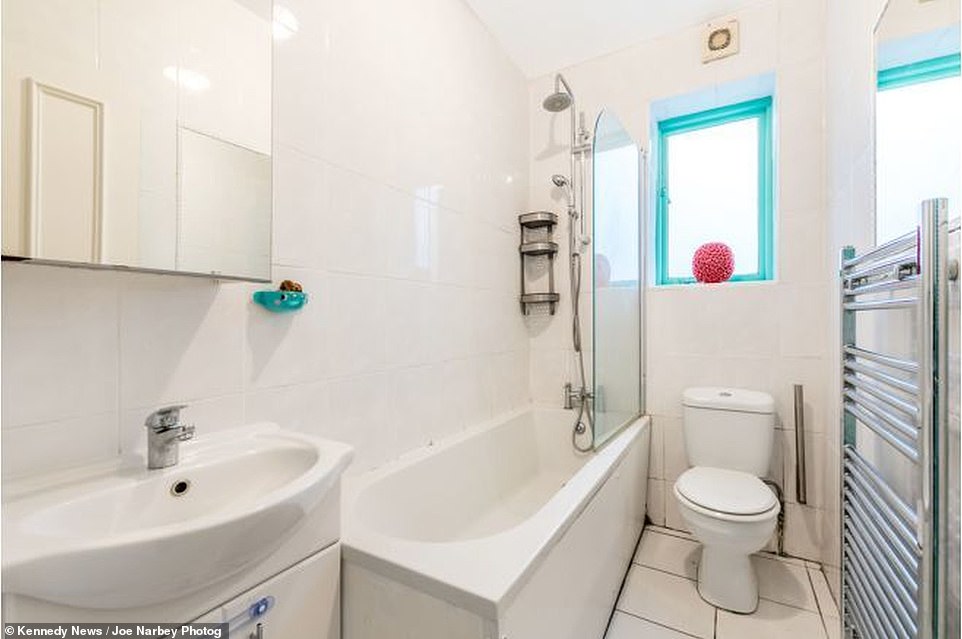 When sale fell through, Sanderson contacted a comedian pal who helped write and record video. Pictured: the bathroom 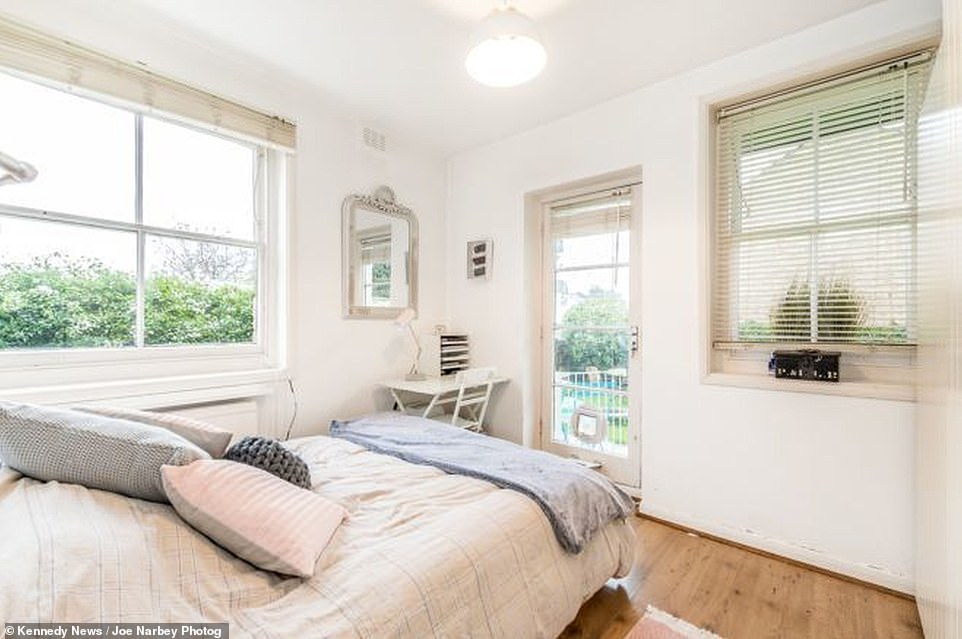 East Dulwich flat is on market listed with a guide price of £425,000 and features two bedrooms, one of which is pictured here 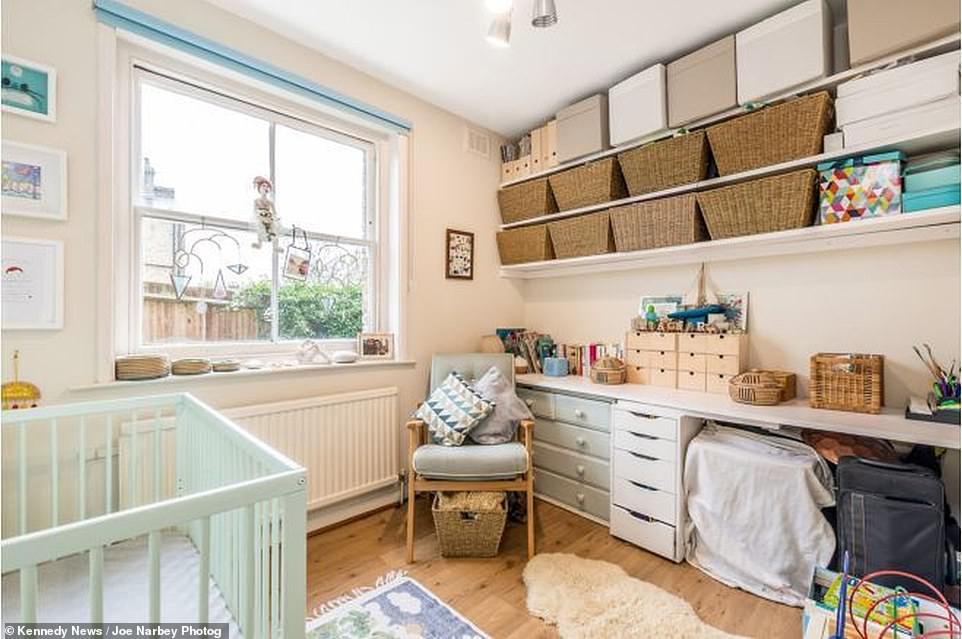 Sanderson Jones shares the flat with his partner Imogen and son Davey who also enjoys using the pool, his father claims

‘A friend told me how unique it was that the property has a pool, so I thought we should do something to highlight that, then I contacted Sam.

‘We wanted to do something that was a bit silly and a bit fun. We wrote the script, so I used that and ad-libbed a bit too, then Sam did a brilliant job at editing it together.

‘Hopefully it works. I’ve already noticed it’s been shared and posted in various forums and we’ve had one enquiry already so we’ll see how it goes.’

Sanderson owns a community building company The Lifefulness Project, which he says helps individuals and companies increase their involvement in their local areas.

His post to LinkedIn said: ‘Not classic LinkedIn content but….I’m 100% confident this is the funniest joke property advertisement you’ve ever seen.

‘Bit of backstory: We’re currently selling our flat in East Dulwich and last week (the day after my 40th birthday!) our buyer pulled out. Which sucks. 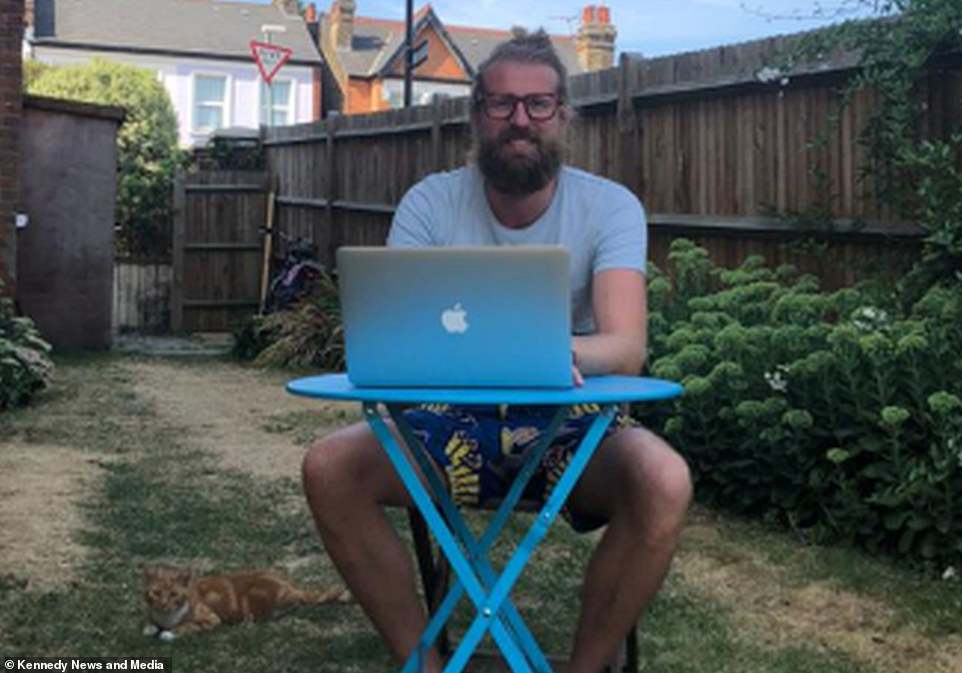 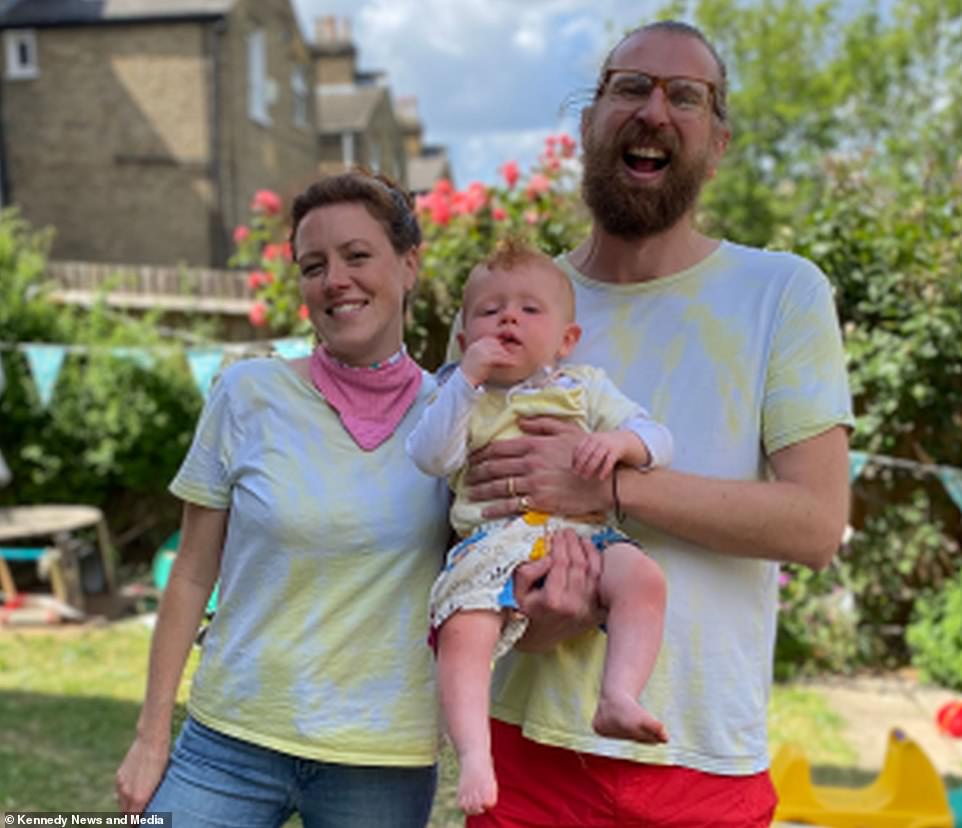 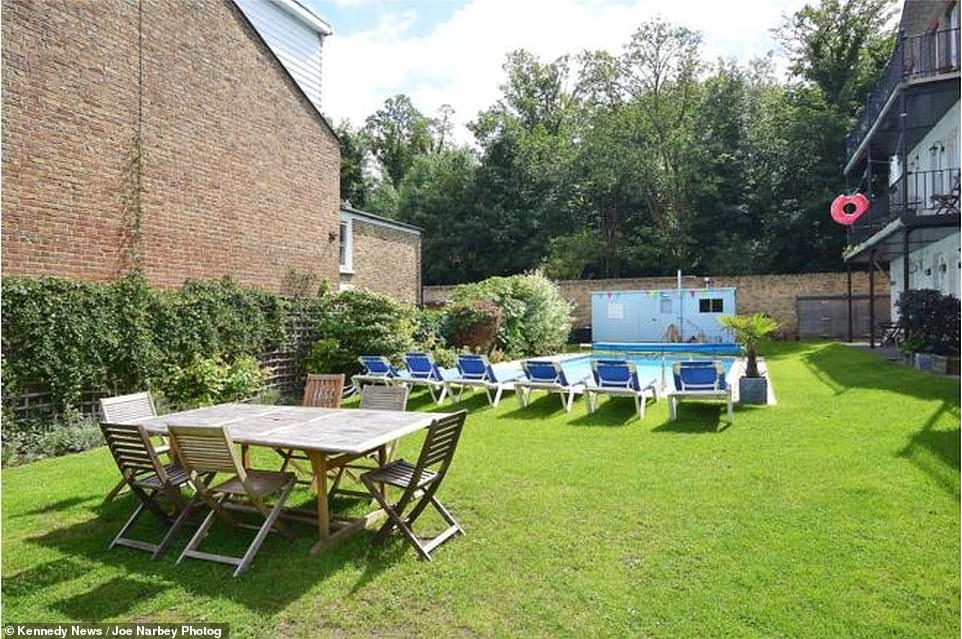 ‘We’ve had an offer accepted on a new place, the stamp duty deadline is coming up and ARGH!!!!

‘I asked our estate agent if there was anything I could do to help get it out there. He said we just had to wait for more people to click on the listing.

‘The thought then occurred to me: ‘what if I make a dumb promo for the place?’. So, with the help of Sam Nicoresti, I did just that.

‘The business bit: If you know anyone who is looking for an affordable (for London) two-bedroom flat in Dulwich / Peckham, then please tag them in this.

‘And if you’re feeling guilty because you didn’t get me an expensive birthday present, sharing this will make up for it. Hope you like the vid and thanks for getting the word out.’ 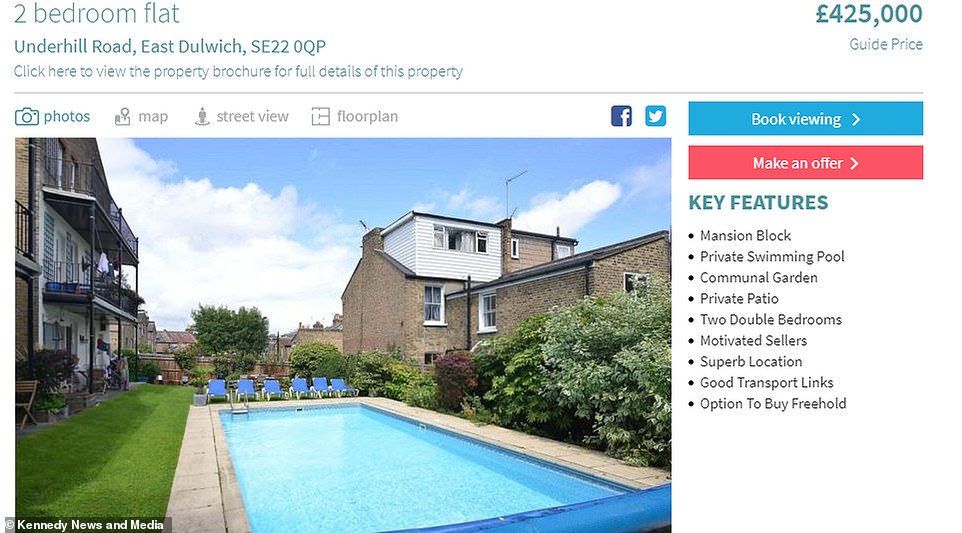 Sarah Weiler replied, saying: ‘So good! Didn’t know I was looking for a flat with a pool until I saw this.’

Richard Watkins said: ‘I like that it says ‘Motivated Sellers’ which seems like the understatement of the year.’

Marketing officer Simon Massie-Taylor said: ‘Who pulls out of a great property deal? The day after the seller’s 40th birthday? With a pool?’

Sanderson’s property can be found on Purple Bricks by clicking here.