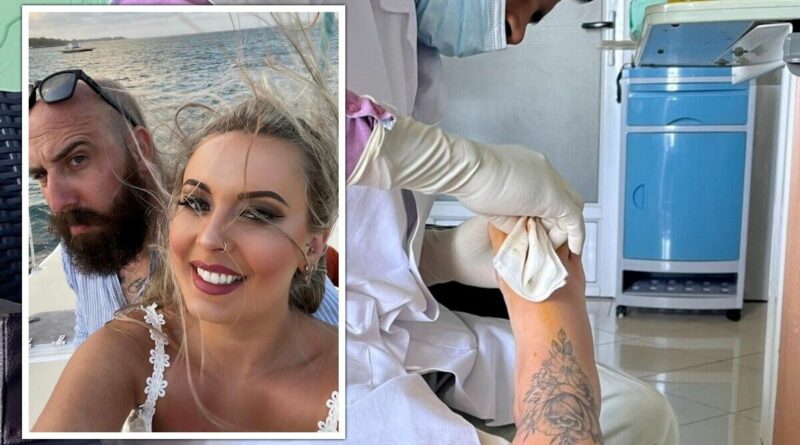 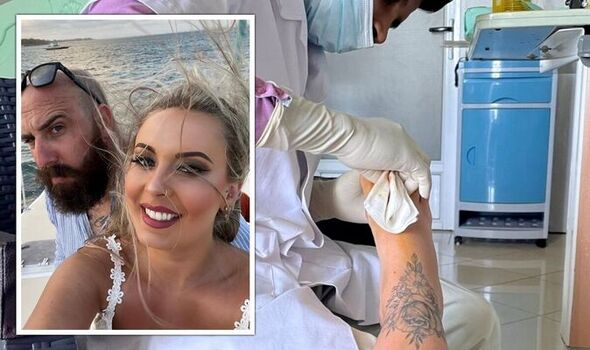 Amy and Callum Thomson were at a beach BBQ on a two-week trip to Mauritius when she took a swim to cool down. She says an organiser told her she would not need protective swim shoes as there was nothing dangerous in the water.

Amy, 27, went into the Indian Ocean without them, and was stung when she stepped on a camouflaged stonefish – one of the deadliest sea creatures.

The hairdresser, from Lymington, Hants, said: “I came straight back to the shore. I honestly have never had that much pain in my life.

“I looked at my foot and it had already doubled in size.

“I looked underneath my foot and it had gone all blue and white.”

It was an hour before the newlyweds’ boat returned to dock and they waited another 45 minutes for a taxi back to their hotel.

Its doctor ordered Amy to go straight to hospital – a one-hour journey using an emergency ambulance.

She said: “The pain lasted until eventually I was put on a drip and given morphine.

“I stayed over in the hospital that night where I received anti-venom for the sting.

“Later that night I had an incision down my foot where they squeezed the venom out.

“The rest of the honeymoon I was bandaged up.

“I couldn’t do anything, I was just chilling by the pool.”

She said: “On the flight home my foot blew up like a balloon and I am still suffering now.

“I have a hospital appointment on Thursday because my toe won’t stop weeping and I have been on antibiotics since I have been home.

“There is still no solution for it. I feel really down from it all because I am still suffering.

“All because when I was putting my shoes on, all that guy had to do was not say anything and let me crack on and put them on.

“I literally went to put my sea shoes on and the guy who was organising the trip said ‘No, no, no, you don’t need those here.’

“It was all sand so I listened to him and went in.”