Australia took another small step into space on Sunday with the launch of a satellite “the size of a large loaf of non-artisan bread from the supermarket” designed by scientists and students from Sydney’s universities.

Iver Cairns, professor in space physics at the University of Sydney, spoke like a proud parent ahead of the launch of the CUAVA-1, an Australian designed and built satellite, onboard a Space-X rocket from the Kennedy Space Centre at Cape Canaveral in Florida. 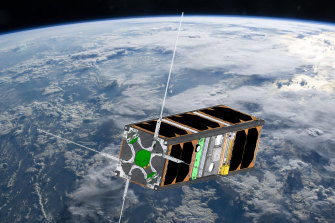 The launch was the rocket’s second attempt to fire into space after bad weather postponed a launch on Saturday.

Professor Cairns said the small satellite weighed considerably more than supermarket-bought bread and had a set of black shiny solar cell panels and few white panels with “eyes” (lenses for our imaging instruments), a small gray metal plate (the GPS antenna), and four tape-wire antennas that radiate from the top.

“Perhaps a simpler view is that it looks like a rectangular black-and-white robot with two eyes and a face halfway down and with either four hands or braids from the top of its head,” he said.

The satellite is the lead project of the Australian Research Council Training Centre for CubeSats, Uncrewed Aerial Vehicles and their Applications (CUAVA) led by Professor Cairns.

“This mission shows that Australian universities are at the forefront of our emerging national space industry,” he said.

CUAVA-1 is being sent to the International Space Station for deployment into orbit about 400 kilometres above Earth, which is scheduled for later this year.

It will carry four experimental payloads – designed and built in Sydney – during its 12-month mission in near-Earth orbit that will investigate Earth’s plasma environment and space weather using onboard radiation detectors, observe Earth using novel imaging technology and forge links with the international amateur radio union.

“Plus many of our hopes and dreams,” Professor Cairns said.

The small satellite is also designed to test equipment for use in a future satellite that will search for signs of life on planets around Alpha Centauri, the nearest star system.

Mission control for CUAVA-1 will be based at the new Responsive Space Operations Centre in Adelaide.

The NSW government, which partly funded the project, also hopes the satellite launch fuels the development of a space industry in the state.

“Our state is home to almost half of Australia’s space-related businesses and generates around half of all space-related revenue nationally: there is no better place to support space technology research and development to create the jobs of the future,” Jobs and Investment Minister Stuart Ayres said.

Professor Cairns said the launch was a “stepping stone” along the path to developing an internationally competitive space industry and a critical link in training the next generation of space engineers and scientists.