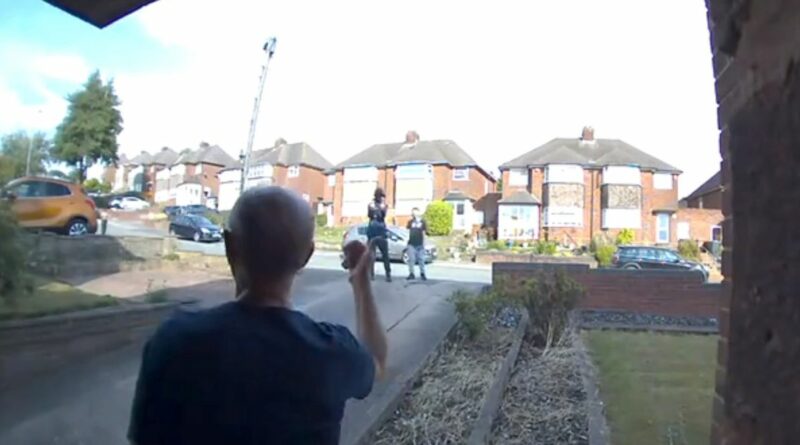 A terrifying video has emerged showing a group of masked yobs attacking a pensioner outside his home and hurling abuse at him when he tried to detain one of them.

Roya Muller, 76, has been harassed for months by a group of 14-year-olds who came kicking his door and throwing stones since last October and the attacks have left him "frightened to go out" of his home in Great Barr.

His daughter, Natalie Cox, has recently posted CCTVs of their incidents on social media, hoping the mothers of the youths to come forward.

In one footage, a boy, who has a balaclava on, is seen running to a driveway before Roy steps out to grab him. He falls onto the ground and calls for help while his pals rush to his aid.

Roy gets kicked and hit as they push him towards his home, which he then retreats inside for safety.

In the latest video Natalie shared today, one boy can be seen standing outside Roy's home and shouting: "Come on p*ssy. D**khead."

He told Birmingham Live that the youths can be coming every day, adding: "I'm hoping to catch them and call the police.

"On Thursday he was trying to hit my glasses, then he called his mate over and they both ran.

"I've got a cut on my ear and a few aches and pains, but nothing I can't deal with. It's very frustrating is, it's awful that I've got to live like that.

"I've also had them throwing stones and shouting abuse. I just don't want to see them there at all.

"I'm frightened to leave the house in case they do it and when I am out I'm checking my camera on my phone.

"The police keep saying they will step up patrols but there aren't any patrols to step up." A spokesman for West Midlands Police said: "We're investigating after receiving reports of a man in his 70s being the victim of assault and harassment in Great Barr.

"We fully understand how distressing this is and are looking to safeguard the man while progressing enquiries to establish those responsible.

"Officers from the local neighbourhood policing team are aware of ongoing anti-social behaviour and are routinely monitoring the area as part of their patrols strategy. We take all allegations of harassment incredibly seriously, and we are committed to ensuring the safety of our community.

"If you know who’s casing the problems in the area, please use the Live Chat service on our website west-midlands.police.uk or call 101 and quote crime number 20/666656/22."