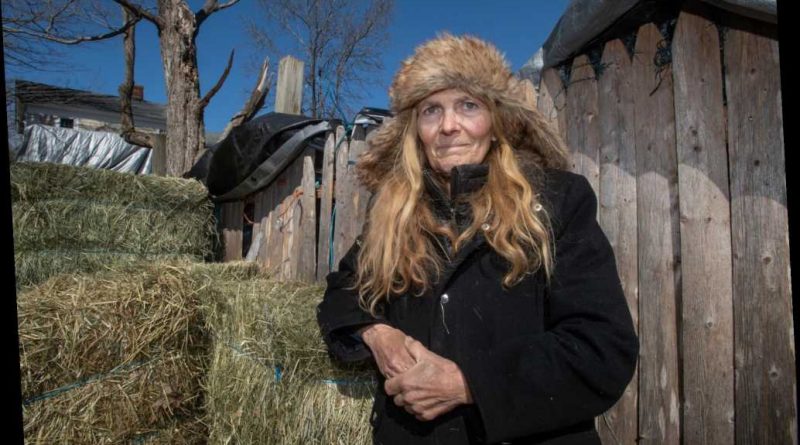 Goats team up on terrified women at Kansas safari

A run-down estate in a ritzy Connecticut town devolved into a “horror house” littered with the decomposing corpses of dozens of goats.

The grisly discovery was made March 10 by state Department of Agriculture agents responding to complaints about animal abuse and conditions, during a surprise raid on the property of 71-year-old Nancy Burton in Redding, 65 miles north of Manhattan. Burton is the widow of former New York Times culture and arts editor William Holmes Honan.

Upscale neighbors had long complained about the stench and mess from the herd of marauding goats that ran helter-skelter outside and inside of Burton’s home, on the roofs of her vehicles, and on their multimillion-dollar properties. They compared her dilapidated acreage, which includes a collapsing barn partly covered in tarps, to the “Beverly Hillbillies.”

Burton has been repeatedly cited with zoning and roaming-animal violations.

But while the dispute had frustrated neighbors in the bucolic town, they were aghast at the discovery of the dozens of rotting carcasses.

The horrific conditions were documented Thursday in a petition filed by the state in Superior Court in Hartford. Among the shocking findings:

Asked how and why the goats had died, Burton told The Post, “Goats die. People die. All are mortal.

“If the state wants to ask me that question, I will answer it at the hearing,” she added. “I’ve devoted care, love and devotion to my goats and it will be hard to prove otherwise.”

The state seized 65 live goats during the raid, a number of which were underweight, according to the petition. Many had extremely long hooves that were not being maintained and were affecting the mobility of the animals. Others had missing fur or were matted and caked with mud and manure. The petition also cited “inadequate manure management” and a lack of fresh water for the animals.

A hearing was set for April 6 on the state’s petition to keep the animals. Burton, an environmental activist widowed since 2014, claims they were illegally seized.

Burton told the Post that she had buried the dead goats.

“The goat burials were vandalized and desecrated and left exposed. I did everything proper regarding burials,” she said. “I am awaiting the spring thaw to be able to restore the burial sites fully with the help of friends and neighbors.”

She said she could not comment further without seeing the state’s complaint. “There are no specific rules in Connecticut,” Burton added. “People who have animals can dispose of them on their own property.”

“Her place was a horror house of dead goats and uncared for live ones,” Susan Winters, editor of the local newsletter “Hello Redding,” told The Post. “I’ve been screaming about what was happening there for at least two years. I’ve compared Nancy Burton to the ‘Tiger King.’”

Jerry Oppenheimer is a bestselling author and a frequent contributor to The Post.