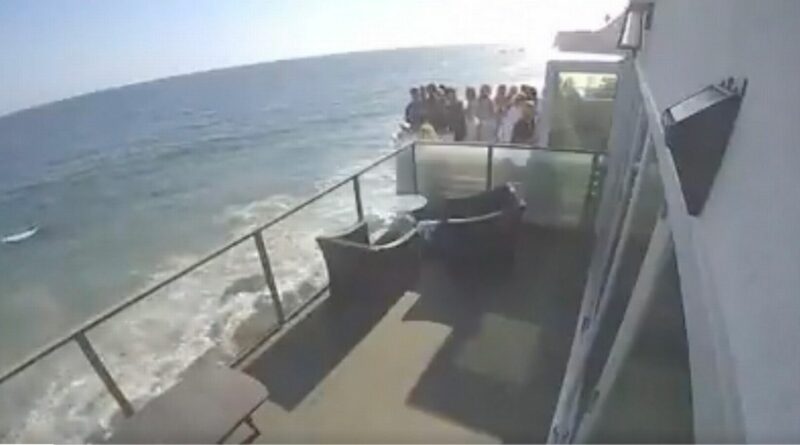 Nine people were injured after a house balcony collapsed and sent a group of partygoers plunging 15ft down to jagged rocks one a beach.

The balcony suddenly gave way when a group of 15 people were attending a birthday party at a home in Malibu, California on Saturday evening (May 8).

Four people were rushed to hospital with non life-threatening injuries while the others were treated at the scene.

Video captured on a surveillance camera shows the group chatting and laughing outside while standing on the wooden deck.

Seconds later, the balcony collapses, sending the screaming group plummeting down to the rocks beneath. A witness told ABC7: "[There were] probably like 10 people on the back deck and we heard a crack and I literally saw all of my best friends and my girlfriend fall 15 feet to the rocks.

"It was a freak accident. I don’t know how that happens … the deck literally just gave out."

Emergency services attended the scene and Captain Ron Haralson, of the county fire department said: "It was approximately 15 people on one fairly small deck, so weight could have been an issue.

"Down below are jagged rocks, large rocks, so a very dangerous situation and fortunately, no one was hurt seriously or killed."

The house owner told local media that she had rented out the home for the weekend, and had told the renters not to host any parties. She also said her maximum number of guests allowed was six, but a neighbour called her that around 30 people showed up at her place on Saturday.

The owner added she was on the phone trying to get the renters to leave her property when the collapse occurred.

Investigators said that the collapse likely occurred due to the integrity of the deck, and the weight of too many people.

The fire department has declared the house uninhabitable.