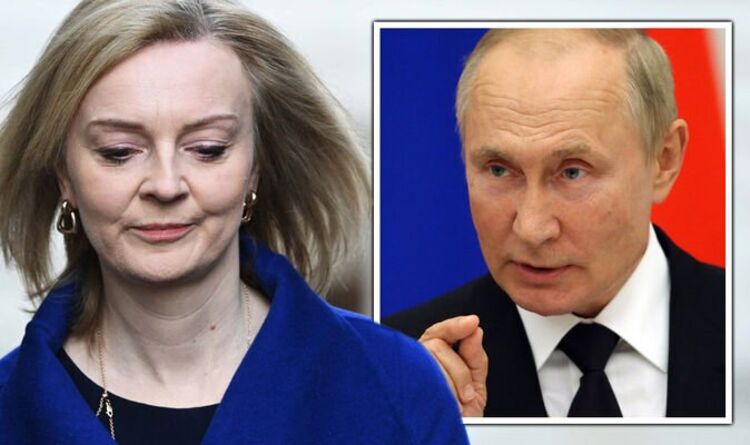 In the two weeks since Putin’s forces invaded Ukraine, countries across the globe have placed a variety of sanctions on Russia in order to damage its economy and encourage the Kremlin to end the conflict. UK sanctions imposed by Foreign Secretary Liz Truss against Russia include an overseas asset freeze on the Russian Central Bank, and banning the Russian state and all Russian companies from raising funds in the UK. On Tuesday, the UK announced that it would phase out Russian oil and gas imports by 2022. On March 1, Transport Secretary Grant Shapps announced that the UK had become the first country to pass a law banning all ships with connections to Russia from entering its ports.

These sanctions have caused the Russian Rouble to collapse, with the currency losing 40 percent of its value against the dollar since the beginning of 2022.

However, Julian Longson, CEO of maritime intelligence and tracking company Pole Star told Express.co.uk that there are a number of “deceptive” tactics that could be used by Russia to evade shipping sanctions.

Mr Longson said that Moscow could use similar tactics to those used “many times before” by countries such as North Korea and Iran.

He said: “When it comes to circumventing the new restrictions on Russia, there are some key sanctions evasion tactics that we’re seeing across maritime trade.

“These come in the form of deceptive shipping practices and are not new to the industry; at Pole Star we’ve witnessed them used many times before in respect of Iranian, North Korean, Venezuelan, and other sanctioned trades.”

Mr Longson said that these tactics often come in the form of “dark activity”.

He explained that this means “when a ship switches off its Automatic Identification System (AIS) transponder to avoid being tracked and monitored.”

He added: “While this may be done legitimately if the master believes the ship is under threat from piracy, it is more often done to conceal a ship’s operational behaviour from regulators and enforcement, particularly as it relates to illicit ship-to-ship transfers between two vessels to exchange sanctioned or embargoed cargo.

“For example, the transfer of oil from a Russian-flagged tanker carrying crude oil to another tanker flagged outside Russia.”

DON’T MISS:Kate shows solidarity with Ukraine as she steps out in London with …

How the EU hooked itself on Putin’s gas

Mr Longson went on to explain other tactics used to evade shipping sanctions.

He said: “Another deceptive practice is “AIS spoofing” where a ship’s AIS is deliberately programmed to generate a false GPS signal well away from its true location.

“Other techniques that bad actors often use include falsifying shipping documents and “flag hopping”.

“Falsifying shipping documents is fairly self-explanatory – bad actors will amend cargo and vessel documents to conceal where goods originated from, or who is the ultimate beneficial owner profiting from the trade, such as a Russian owner.

“Flag hopping, however, is a little more unusual.

“Every ship must be registered to a Flag administration’s fleet, but, to evade detection, bad actors repeatedly switch between lower-quality Flags in an attempt to avoid investigation.”