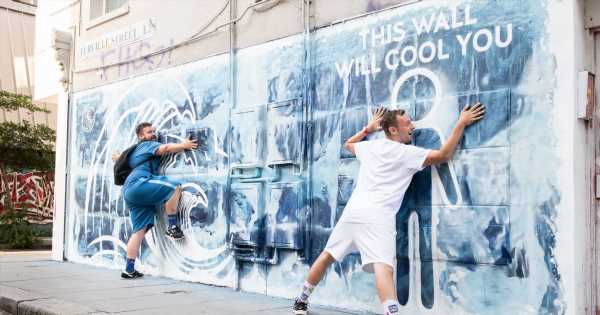 Hot and bothered commuters were offered the chance to escape the heat – with a billboard that cools you down.

With temperatures reaching heights of 38.1 degrees C yesterday – and predicted to exceed 40 today – millions have been feeling the heat as they battled public transport delays and cancellations to get into work.

But those heading through 83 Redchurch Street Shoreditch, in London’s trendy east end, were offered some respite thanks to a six-metre wide billboard, designed by White Claw Hard Seltzer, to offer passers-by the ultimate mid-journey refresh.

The temporary structure, which will be in place for two weeks, has been coated with heat-proof paint – described as frost-fuelled – and covered with specially designed cooling mats with touch-activated gel centres, that work by absorbing the body heat of people interacting with the board. Passers-by are able to chill out by placing a palm – or other key hot spots, such as their forehead or the inside of their wrists – on the cool-to-the-touch wall.

The board also features a thermometer to keep people up-to-date on the record breaking temperatures, with street-style graphics allowing it to stand out from its urban surroundings.

Michael Dean, spokesman for White Claw, said: “With record breaking temperatures, we wanted to give Londoners a much-needed moment of light refreshment on this scorching day.

“What better way to cool them down than with a White Claw in hand, and a billboard that will absorb all body heat.”