WASHINGTON — The Republican-controlled House has planted the seeds for a debt-ceiling showdown, with Speaker Kevin McCarthy endorsing a push by his hard-liners to demand spending cuts as part of any extension of the country’s borrowing authority.

The political divide is deep and the stakes are high.

Ultraconservative lawmakers insist they don’t want the country to default, but their conditions for raising the debt limit are unlikely to be accepted by the Democratic-led Senate or President Joe Biden.

Republicans are on a collision course with the White House, which is demanding that Congress raise the debt limit without conditions.

If they fail to resolve their differences and cause a default, the range of consequences includes a stock market crash, a recession, higher interest rates for consumers, a weaker dollar, a U.S. credit downgrade and a government unable to meet all its obligations, from funding the military to providing Social Security benefits.

What is the debt ceiling?

It’s a legal limit dating back to 1917 that caps the level of debt that the federal government can assume. Once the U.S. hits the limit and exhausts ways to pay its bills, Congress must lift the ceiling in order for the government to continue to borrow to meet its obligations. If it doesn’t, the country could be forced to default, which experts warn would be economically catastrophic.

Republicans have waged heated battles over the debt ceiling, most notably in 2011, but they have always been resolved in time.

The issue is poorly understood by the public and is often falsely portrayed as a vote to spend more money, when it is simply about paying bills that the U.S. has legally imposed. Congress is unique in that it regularly votes to raise spending or cut taxes, which adds to the debt, but also forces itself to vote separately on whether the country should borrow to pay those bills.

When is the debt ceiling deadline?

Officially, the U.S. is expected to hit the borrowing limit Thursday. After that, the Treasury Department will use “extraordinary measures” to keep paying bills, which is expected to continue until “early June” when Congress will need to act, Treasury Secretary Janet Yellen told McCarthy, R-Calif., in a letter Friday.

The national debt is about $31.4 trillion.

Why does a GOP House complicate debt ceiling negotiations?

Conservative lawmakers say that as part of their negotiations to allow McCarthy the speakership, it secured assurances to include major spending cuts to balance the federal budget in any debt limit increase. And to enforce that, they’ve secured other rule changes that give a small group of members the power to remove McCarthy.

But Democrats, who control the Senate and the White House, are unlikely to accept those cuts. They are also opposed to granting policy concessions to lift the debt ceiling, particularly after a 2011 showdown, during Barack Obama’s presidency, when a GOP House brought the U.S. to within days of economic disaster and caused a rating downgrade by Standard & Poor for the first time ever.

The House’s new rules, adopted by Republicans last week, require an explicit vote to increase U.S. borrowing authority, eliminating an end run that Congress has previously used to fast-track it.

What do Republicans want?

A variety of things. So far, there’s no specific set of demands and no document that reflects a consensus position within the party. Republicans have floated everything from budget cuts to socially conservative legislation as part of a debt ceiling increase.

McCarthy has said the debt ceiling is a test of the GOP’s commitment to hold the line on spending. Appearing Sunday on Fox News, he compared the U.S. government to a spendthrift child with a credit card limit that needs to be reduced.

“You couldn’t just keep increasing it,” he said, calling on Biden to negotiate over spending cuts. “Let’s sit down and change our behavior for the good of America. Because what we’re going to do is bankrupt this country and bankrupt these entitlements if we don’t change their behavior today.” (Social Security and Medicare are the costliest of those programs.)

Rep. Ralph Norman, R-S.C., said he wants dollar-for-dollar spending cuts for any borrowing limit increase. “Plus, we’ve got to make some headway with the deficit we’ve got.” 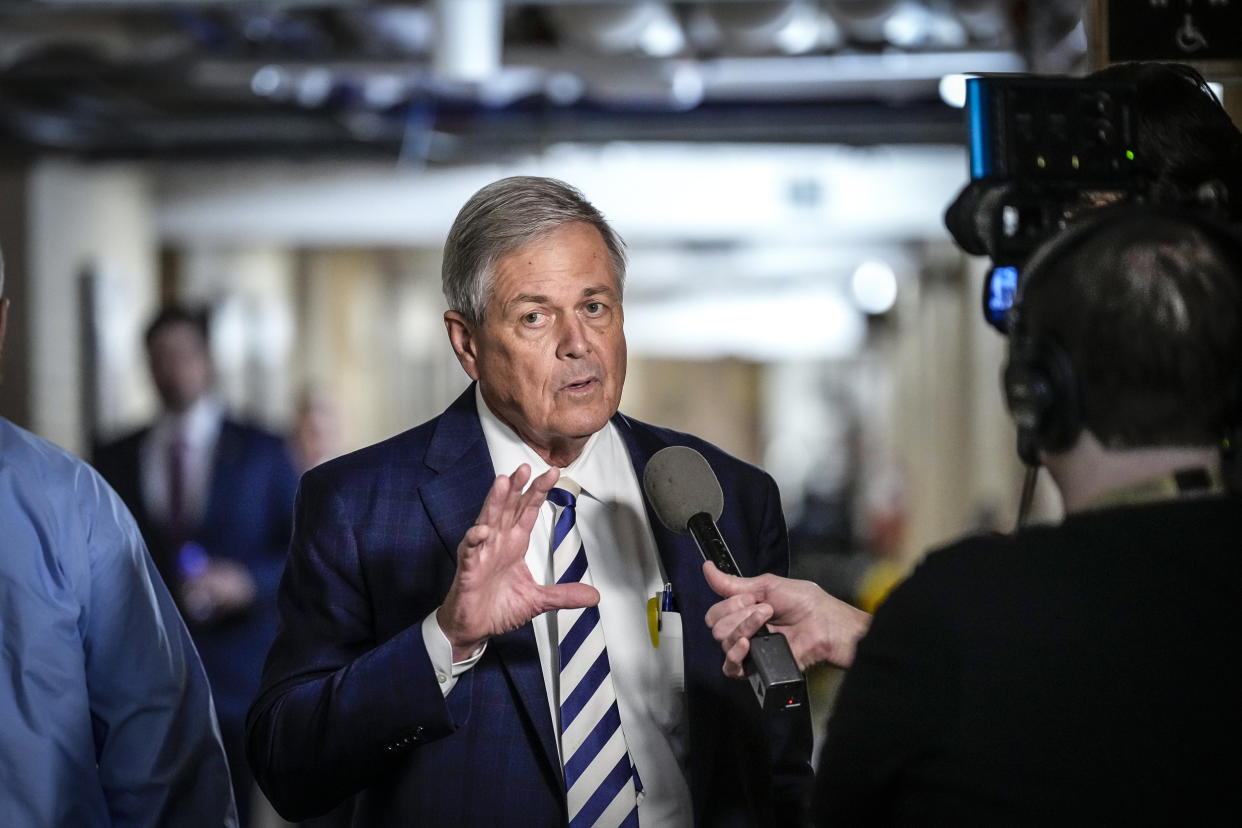 Rep. Chip Roy, R-Texas, said he wants to cut federal spending to fiscal year 2022 levels and balance the budget over 10 years. That’s a tall order: Balancing the budget in a decade would require massive spending cuts or tax hikes that lack support in Congress.

Still, said Roy, “You only have so many leverage and negotiating points. The debt ceiling is one of those.”

Stephen Miller, who advised former President Donald Trump, pointed to the debt ceiling and government funding bills as a way for the GOP to try to force Biden to cut money for the IRS and curtail abortion rights.

Where do the White House and Democrats stand?

The White House had laid down a marker: no negotiations, no policy strings attached to raise the debt ceiling.

“We’re not going to do any negotiations. And it should be, again, done without conditions,” White House press secretary Karine Jean-Pierre told reporters Friday.

Legislative action requires GOP cooperation. Republicans control the House, meaning McCarthy gets to decide what bills get a vote on the floor. In the Senate, Democrats have a 51-seat majority, but most legislation requires 60 votes to break a filibuster.

Senate Majority Leader Chuck Schumer, D-N.Y., and House Minority Leader Hakeem Jeffries, D-N.Y., issued a joint statement Friday warning that a “default forced by extreme MAGA Republicans could plunge the country into a deep recession.” They added: “Democrats want to move quickly to pass legislation addressing the debt limit so there is no chance of risking a catastrophic default.”

Where do moderate Republicans stand?

Some Republicans say default is not an option, but none have called for the “clean” increase Democrats want.

“I will tell you that we will not allow our country to default on our debt,” said Rep. Brian Fitzpatrick, R-Pa., who co-chairs the bipartisan Problem Solvers Caucus. “The full faith and credit of the United States is what gives us the position we hold in the world. So that’s off the table. We’re not going to default. We cannot allow ourselves to default.”

Fitzpatrick said Congress should “tie it to some assurances that we’re going to be responsible in trying to balance our budget.” But he said he believes in a social safety net and that a 10-year timeline to end red ink is “aggressive.”

Rep. Don Bacon, R-Neb., who sits in a district won by Biden, said Sunday on ABC’s “This Week” that default is “a real threat” that both parties should take seriously.

He said Republicans are determined to “control reckless spending” but should realize they cannot simply “dictate” terms to the Senate and White House. He insisted that Biden must negotiate, too: “He can’t say he refuses to negotiate. That’s a nonstarter, as well.”

Is there a way around McCarthy?

Lawmakers have discussed using a “discharge petition” if necessary. It requires a faction of House Republicans to end-run a speaker of their party — an extremely rare occurrence — and team up with Democrats to force a floor vote. If a majority of lawmakers sign it, the bill can proceed to a vote in the chamber.

Still, there are a variety of constraints to using a discharge petition.

Some moderate Republicans have kept the door open to a discharge petition. “We’ll cross that bridge when we come to it,” Fitzpatrick said. “It’s one of many options.”