Home » World News » How did Ever Given ship get stuck in the Suez Canal and how was it freed? 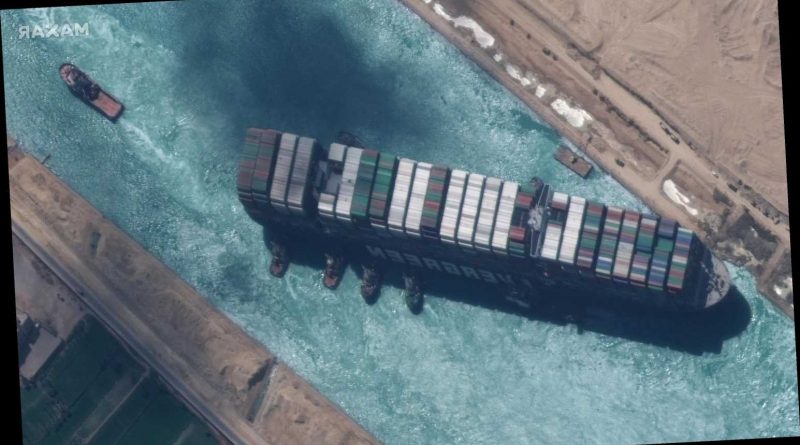 THE mega-ship blocking the Suez Canal has FINALLY been refloated and moved down the channel.

But how did it get stuck, and where is it now? Here's all you need to know… 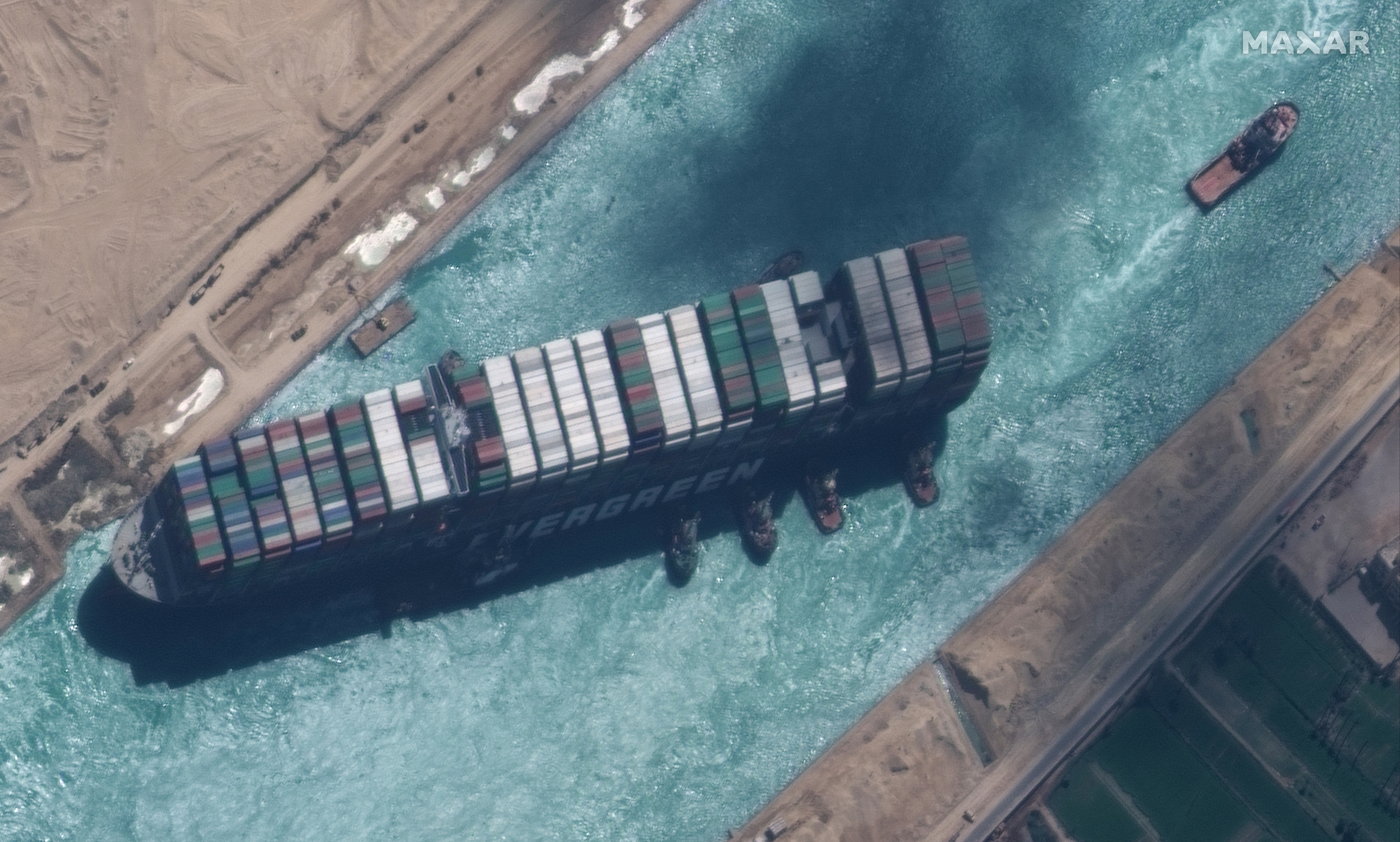 How did the Ever Given ship get stuck in the Suez Canal?

The 400m-long Ever Given became wedged in the shipping lane due to extreme weather conditions last Tuesday.

High winds are understood to have blown the boat, which was en route to the Netherlands from China, across the narrow canal that runs between Africa and the Sinai Peninsula.

With canal transits stopped, Egypt already has lost over $95 million in revenue, according to Refinitiv.

The ship, its captain, its crew and Egyptian officials who boarded the vessel in the canal are all under scrutiny, reports say.

Shoei Kisen has apologised for the accident and said they are making every effort to free the stricken boat.

Authorities in Egypt are probing the crash and said high winds were likely a factor.

But they are also looking at possible human error and mechanical failure.

Yiannis Sgouras, a Greek ship captain who has passed, said usually two local officials, known as pilots, come aboard to advise the navigation through the canal.

Yet, it is the ship's captain who has ultimate responsibility.

Capt. Sgouras, who has passed through the canal at least two dozen times, said: "Suez is difficult and still gives me the creeps."

He told the Wall Street Journal that during gusts of wind “you really have to keep her steady. If you accidentally turn one degree you can lose her.”

In 2019, the Ever Given was involved in another serious accident when it crashed into a small ferry in Germany. 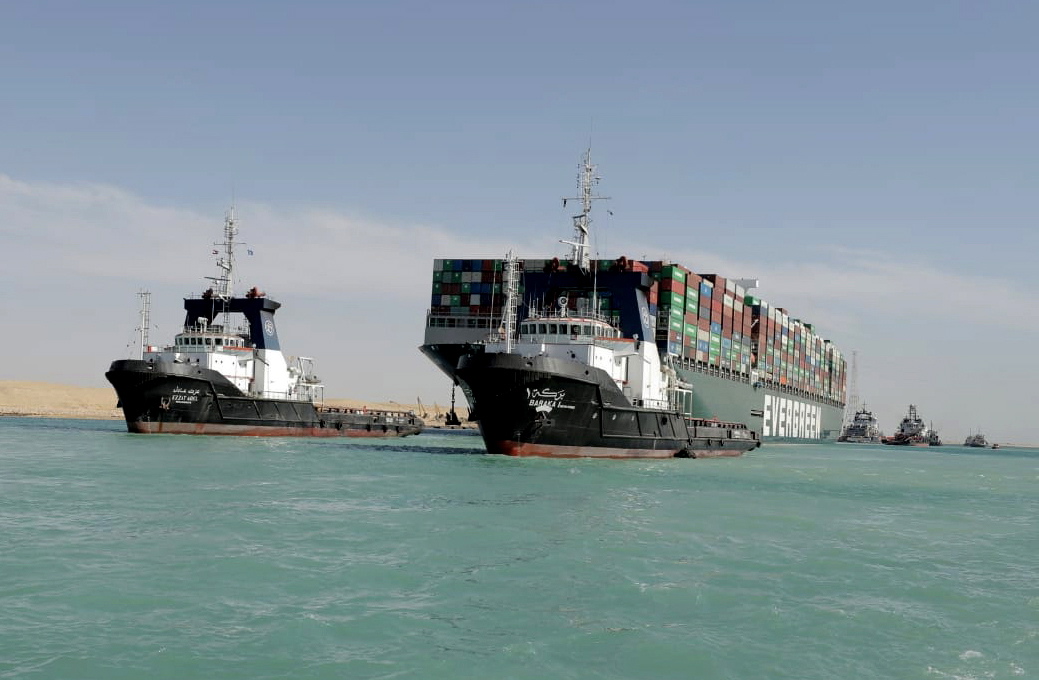 How was the Ever Given ship freed?

Officials said that rescuers have successfully freed the front end of the monster cargo boat after moving the rear end at 4.30am local time.

Canal officials said the skyscraper-sized boat had been turned "80 per cent in the right direction" after the stern was shifted with "pulling manoeuvres" that moved it 335ft from the bank.

Rescue crews freed the vessel using tug boats and digging, even as analysts warned the monster vessel may be too heavy for such an operation.

The salvage team dredged beneath the vessel's bow with high pressure water jets to wrench the ship from the clay, said Berdowski. 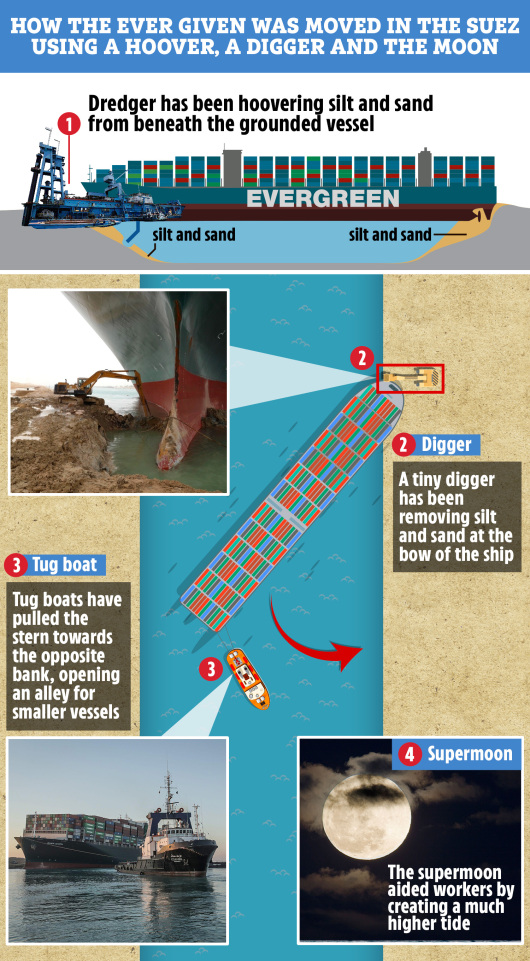 Eleven tugboats were helped by several diggers which vacuumed up sand underneath at high tide brought on by a "supermoon" – a full moon which raises the water level due to its gravitational pull on the earth, canal services firm Leth Agencies said.

Several dredgers had worked to vacuum up 27,000 cubic metres of sand and mud around the 200,000-tonne ship which is as big as the Empire State Building.

Another powerful tugboat, the Italian-flagged Carlo Magno, arrived at the scene on Monday, and the flotilla would now focus its efforts on the front of the ship, said Berdowski.

Where is the Ever Given ship now?

The megaship is now being towed to the middle of the waterway and toward the Great Bitter Lake, a wide stretch of water halfway between the north and south end of the canal.

Once there, the ship will undergo a technical examination, officials said.

It wasn't decided whether the Panama-flagged, Japanese-owned ship would continue to its original destination of Rotterdam or if it will need to enter another port for repairs, an official for boat's owner Shoei Kisen said.

Ship operators did not offer a timeline for the reopening of the crucial canal, which carries seven per cent of the world's oil.