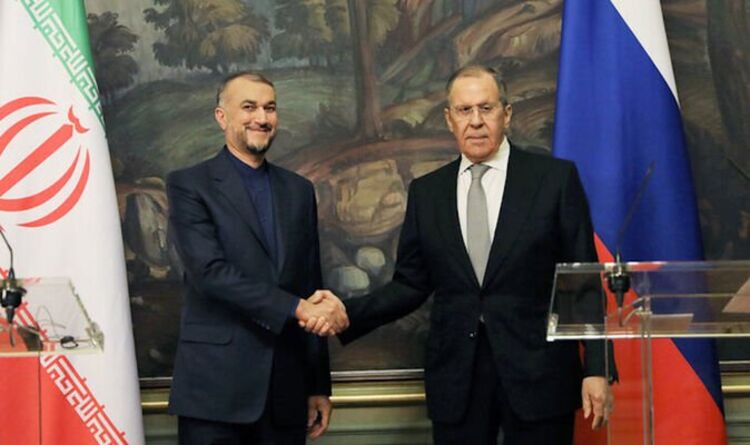 The bloody conflict in Ukraine has turned attention to the east, with western leaders concentrated on assisting President Volodymyr Zelensky. Nations that have typically supported Russia have, so far, chosen not to involve themselves in the campaign. But that doesn’t mean they don’t pose a threat of their own, with military growth accelerating while the spotlight is elsewhere.

Iran, an occasional Russian ally that shares Putin’s western unease, has built up its nuclear capabilities over the last few years.

The Joint Comprehensive Plan of Action (JCPOA), an agreement commonly known as the Iran deal, once bound the country’s leadership.

Under the deal’s parameters, Iran agreed to cap its stockpiles of low-enriched uranium – a material designed to facilitate nuclear power generation and create weapons – to 300kg.

As of 2022, the country is quickly approaching its pre-JCPOA enrichment level of more than 8,000kg, having dropped its obligations in 2018.

The Iranian government abandoned the deal following the departure of core sponsor the US at the direction of Donald Trump, and enrichment has since exploded nearly tenfold.

When the US left the JCPOA, Iran started enriching almost immediately, with Uranian stockpiles increasing initially by a trickle in 2018, according to the International Atomic Energy Agency (IAEA).

In 2019, total enrichment only grew by double figures before jumping markedly to just above 3,000kg in 2021.

IAEA figures show they have settled to just below this level, having dropped slightly during the Covid pandemic.

Iranian enrichment is currently at 2,883kg, its second-highest level since exiting the JCPOA.

The Arms Control Association (ACA), a US-based organisation, said 170kg of 20 percent enriched uranium was enough for one nuclear bomb.

Increased Iranian enrichment has concerned US officials, as they have proven willing to negotiate despite the situation in Ukraine demanding the most high-level attention.

Washington personnel have continued their bid to reestablish JCPOA terms and have the country whittle down its uranium production.

Speaking earlier today, a state department official said the government would not sanction Russian nuclear participants of the deal.

The official told Reuters: “We continue to engage with Russia on a return to full implementation of the JCPOA.

“We would, of course, not sanction Russian participation in nuclear projects that are part of resuming full implementation of the JCPOA.”

But the Kremlin said the sanctions directed at the Putin regime for its invasion of Ukraine hampered efforts to resurrect the deal’s terms.

Kremlin spokesman Dmitry Peskov said the sanctions “directly affect the interests of our country in the context of that deal”, adding they were a “new aspect” that “must be taken into account”.

European negotiators have backed their allies across the Atlantic.

In a joint statement issued last weekend, they insisted a “final text” was “essentially ready and on the table”.

They added: “Nobody should seek to exploit JCPOA negotiations to obtain assurances that are separate to the JCPOA.”