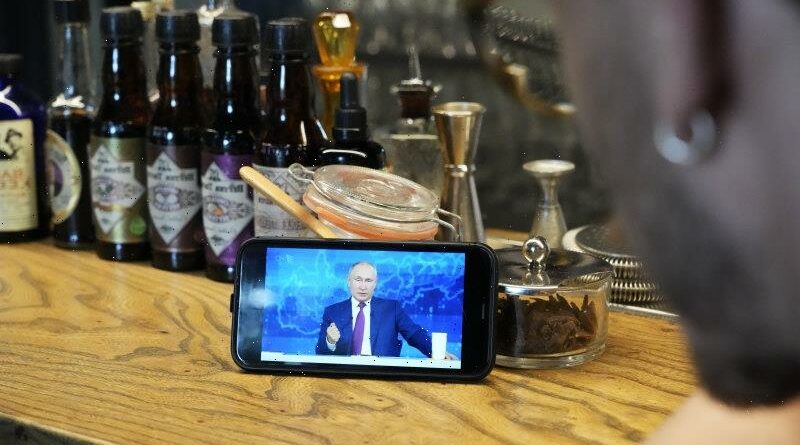 Aleksandr and his father both live in Russia, but they exist in alternative realities when it comes to the war in Ukraine.

The 31-year-old, who has participated in pro-democracy protests, opposes the war on moral grounds. The engineer has also taken a personal hit from the global backlash to Putin’s invasion. He faces unemployment after the foreign-owned company he works for suspended its Russian operations, potentially withdrawing from the country permanently. 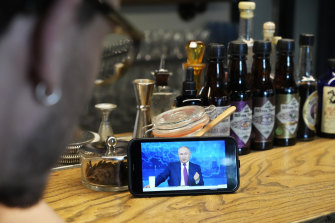 A man watches a live stream of Russian President Vladimir Putin’s annual televised call-in show, in a bar in Moscow, last year. Russians have been fed a diet of propaganda by the Kremlin for years.Credit:AP

He says he was shocked by his 64-year-old father’s lack of sympathy when he told him about his precarious situation.

“I tried to explain to my father that due to the political situation, due to this madness, I could be fired,” says Aleksandr, who asked that his surname not be used to protect his safety.

“You know what he said? ‘Well, they can’t fire you for two months because of our country’s regulations’.

“He didn’t care at all. After that I understood that he cares more about this patriotic view of his country than his own family.”

Unable to stomach watching Russian state-owned television, Aleksander seeks out news from independent online sources to learn what is happening in Ukraine – and Russia. “It’s very difficult for me to watch such propaganda,” he says.

His father, meanwhile, watches Russian television throughout the day and night. He supports the Kremlin line that the invasion was necessary to protect Russian speakers from an alleged “genocide” by the Ukrainian government.

“He started to repeat the propaganda he saw on TV without any thinking,” Aleksandr says. “He supports the government line that there are Nazis in Ukraine.”

Marina Ovsyannikova, an employee at state-controlled network Channel One, tried to interrupt that narrative this week by bursting onto the set of a live nightly news broadcast holding a sign saying: “Don’t believe the propaganda. They’re lying to you here.” 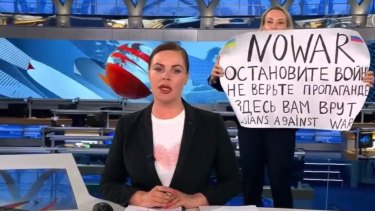 Marina Ovsyannikova, an editor and producer, protests the war on Russia’s Channel One evening news.

Aleksandr’s father declined to be interviewed about his views on the war, saying: “Any words will be used by Western propaganda against Russia and its interests.”

Such a generational rift is not uncommon in Russia where surveys show older people depend on state-controlled television for their news, while younger people are more likely to seek out information on websites and social media.

For sisters Tanya and Valentina, the divide is more geographical than generational. Tanya, 78, lives in Moscow while Valentina lives in Kyiv, the besieged capital of Ukraine.

Tanya supports the Kremlin stance that the “special military operation” – as it is described in state media – is necessary to “demilitarise and denazify” the country.

She supports the war, even though the Russian bombardment has put her sister’s life at risk. Bunkered down in Kyiv, Valentina is scared and upset; she is terrified Putin will deploy chemical weapons against Ukrainians as he did in Syria to aid the government of Bashar al-Assad.

Her rift with her sister over the root cause of the war has only added to her distress.

“I will not talk to Tanya any more about the war or anything related to it,” Valentina says through a translator. “I know that will risk our sisterhood.”

For Aleksandr, he finds his father’s stance especially shocking because he knows about the political situation in Ukraine from first-hand experience.

“We visited Ukraine a lot of times as a family; we went on vacations there every year for 10 years,” he says.

“He saw for himself that there weren’t Nazis in Ukraine. Now he tells me there is a lot of Nazis. I don’t understand how you believe what you saw on the television over what you saw with your own eyes.”

Facing possible unemployment and fearing political persecution, Aleksandr is looking for a way to escape Russia. Even if it means leaving his father and younger siblings behind.