Kuwait’s Emir Sheikh Sabah al-Ahmad al-Jaber al-Sabah has passed away at the age of 91 on September 29 in the United States.

Sheikh Sabah was regarded as the architect of modern Kuwait’s foreign policy; he served as foreign minister for nearly 40 years between 1963 and 2003, was a fervent defender of the Gulf Cooperation Council’s (GCC) unity, and was regarded by some as the ‘voice of wisdom’ as he mediated in the Gulf crisis that pitted Qatar against three of its GCC brethren.

“It is no longer acceptable nor tolerable to have an ongoing dispute among our brotherly GCC states,” Sheikh Sabah said at the opening session of the Kuwaiti parliament’s new term in 2019, underlining the urgency of ending a sea, land and air blockade imposed on Qatar since 2017 by the United Arab Emirates, Saudi Arabia, and Bahrain, as well as Egypt.

Kuwait’s new emir, 83-year-old Sheikh Nawaf al-Ahmad al-Sabah who was sworn in on September 30, will face a range of challenges the late, widely respected statesman was dealing with.

Analysts say the commitment of Kuwait’s leadership to speaking up for GCC unity could very well be tested. ‘There will be some pressures’

Sheikh Sabah belonged to a generation of Gulf rulers that is gradually being replaced by younger, generally more aggressive and more confrontational leaders.

“Some members of the [Kuwaiti] ruling family are very close to Saudi Arabia. With Sheikh Sabah, it was difficult to influence them. Now, there might be an opportunity,” a source familiar with Kuwait’s political circles told Al Jazeera on condition of anonymity.

The source also said that a border issue could again become a source of tension between Saudi Arabia and Kuwait. In the 1970s, the two Gulf Arab monarchies agreed to divide a neutral zone in the area and incorporate each half into their respective territory while sharing and jointly managing the zone’s petroleum wealth, but spats have broken out over the area in recent years.

Former MP Abdulrahman Al Anjari told Al Jazeera that other powers in the Gulf would likely test Kuwait’s new leadership. “There will be some pressures,” he said.

But Al Anjari also pointed out that, although the role of Kuwait’s National Assembly is “minimal” when it comes to matters related to foreign policy, Kuwait is a constitutional monarchy, unlike most GCC states.

Its parliament plays an active role in challenging the government and any departure from the country’s traditional neutrality will likely be met with resistance.

A Kuwaiti source who regularly met the late emir told Reuters news agency: “After Sheikh Sabah, we will be weaker” as no other figures in Kuwait have the same level of experience in navigating regional tensions.

But others believe that there will likely be no major change in Kuwait’s foreign policy or its vulnerability to external pressures due to Sheikh Nawaf’s standing. 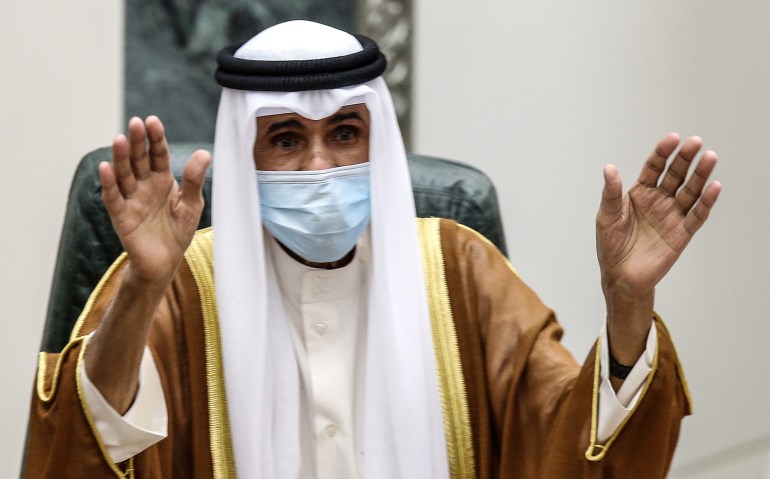 Sheikh Nawaf al-Ahmad al-Sabah salutes the crowd after being sworn in as Kuwait’s new emir at the National Assembly in Kuwait City [File: Yasser Al-Zayyat/AFP]“Sheikh Nawaf’s seniority will itself be a deterrent to external pressures,” Clemens Chay, a research fellow at National University of Singapore’s Middle East Institute, told Al Jazeera.

Chay added that Kuwait’s foreign policy “will likely be in a direction of continuity even if Sheikh Nawaf will focus [more] on domestic affairs”, given the difficulties faced by the Kuwaiti economy.

The intra-GCC divisions have undermined the role the council played in fostering regional economic cooperation among states still rely heavily on oil revenues to sustain generous social welfare systems and to employ most of their citizens.

This issue will likely become ever more pressing as Kuwait’s $140bn economy – hit by the COVID-19 crisis and low oil prices – faces a significant liquidity crisis.

But Andreas Krieg, assistant professor of defence studies at King’s College London, told Al Jazeera that Kuwait has a large, widely undeclared sovereign wealth fund that could be drawn on to make ends meet.

“Unlike Oman, Kuwait is not necessarily dependent on bail-outs from other Gulf countries, which Abu Dhabi and Riyadh have used to exercise leverage over other Gulf states,” Krieg said.

The United States is expected to play a significant role in GCC relations going forward as Washington tries to mediate the GCC rift, which has undermined its efforts to form a united front against Iran – Saudi Arabia’s longtime regional foe that has also been engaged in an escalating dispute with the US.

Secretary of State Mike Pompeo said recently that the Trump administration “is eager” to see the Gulf crisis resolved, and in early September, top US diplomat for the Middle East, David Schenker, expressed cautious optimism that the blockade against Qatar may end soon and he cited signs of “flexibility” in negotiations as Washington has stepped up its diplomatic efforts.

The US is also trying to build an Arab-Israeli rapprochement to form a united front against what American officials refer to as “Iranian expansionism”.

On September 29, US President Donald Trump stated on the passing of Sheikh Sabah: “I hope that the Gulf nations will come together to honour his legacy and work toward the cooperative future he envisioned.”

‘We do not want to experience what Qatar is facing’

The appointment of Kuwait’s next crown prince, likely to be made in the coming weeks, will also be closely watched.

But Krieg said the choice is unlikely to make a huge difference to GCC relations.

“None of the candidates would position themselves as partisan in the Gulf crisis,” Krieg said. “Even Nasser Sabah, who has good relations with Saudi Arabia, would not change the diplomatic course of Kuwait within the Gulf to a more partisan one.”

Some Kuwaitis warn that the commitment to multilateralism, an especially key part of the emirate’s identity since the 1990-91 Gulf War, has to remain for the sake of the country.

“We have to keep in mind that if Saudi Arabia succeeds in its hegemonic behaviour, it would not be in our interest. We do not want to experience what Qatar is facing,” Hamad Albloshi, an assistant professor of political science at Kuwait University, told Al Jazeera.

“To be a mediator is Kuwait’s soft power, and we should invest in it because at the end of the day this would protect the country and bring other countries to respect our existence.”