Home » World News » Huge £900m cruise ship that holds 9,000 may be scrapped before ever setting sail 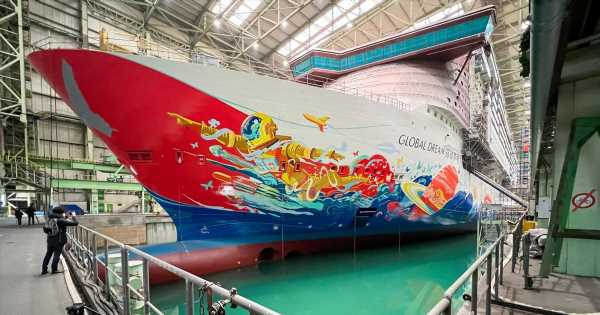 The future of a giant £900million, 9,000-person, fully-built cruise ship remains in doubt before it has even set sail, with another seven cruise ships now stranded alongside it.

Earlier this year, we reported how the Global Dream ship had been sitting inside a German shipyard alongside its sister ship Global Dream II.

The latter was waiting to have some of its fixtures as well as its engines ripped out and sold – as it had already been decided that it would not be worth selling whole.

But the Global Dream ship was still clinging on for dear life, with bosses welcoming bids over the next few months.

It was built by MV Wefrten and accommodates more passengers than any other cruise ship.

The ship was owned by Genting Hong Kong, but they filled for bankruptcy at the start of this year.

The first Global Dream ship is also unfinished in the same dock, but time is running out to find a buyer for the pair as the shipyard is going to make only submarines from 2024.

Now it has emerged that a further seven ships are also awaiting their fate.

Alongside the Global Dream and its sister ship, the stranded vessels appear to be the World Dream, Genting Dream, Explorer Dream, SuperStar Aquarius. SuperStar Gemini, Star Pisces and The Taipan.

While these other seven ships are not brand spanking new, they are currently moored in several different places around the world, and are all owned by the same now-defunct company.

The biggest of the lot, the World Dream, was built in 2017, and currently sits in the Port of Singapore unable to move.

It made headlines during the pandemic when three passengers tested positive in January 2020, forcing all 3,800 guests and crew to live on the ship under quarantine.

Also awaiting its fate is the 2016-built Genting Dream, which is the only one of the Genting ships still in operation.

It has been loaned out to Resorts World Cruises (RWC), and mainly offers short trips around Southeast Asia to 3,000 guest.

It is thought that this ship will be permanently bought by RWC.

Among the other ships, the Explorer Dream was built in 1999 and is currently docked in Port Klang, Malaysia.

As one of the older ships, it might be scrapped rather than being sold – despite costing around £300million to build.

The oldest of the ships with its future in doubt is the Taipan.

This was built in 1989 and only holds 64 guest, and it had been reported that the ship had been bought by a German-based religious organisation who wanted to turn it into a floating bookshop.

However, the deal has not yet been completed, and the ship remains docked in Malaysia.

Seelan Govender, Director of OM Ship Outreach, said: “Through our work, we want to build lasting, high-quality relationships and increase our community involvement while reaching out to new regions.

“Therefore, we urgently need to expand our fleet. If we operate multiple ships, we can stay longer and come back sooner.”

The SuperStar Gemini, built in 1992, is now docked in the scrap yards at Hambantota, Sri Lanka, although it has not yet been given the death sentence, while the SuperStar Aquarius is also in a similar position.

To get more stories from the Daily Star delivered straight to your inbox sign up to one of our free newsletters here.