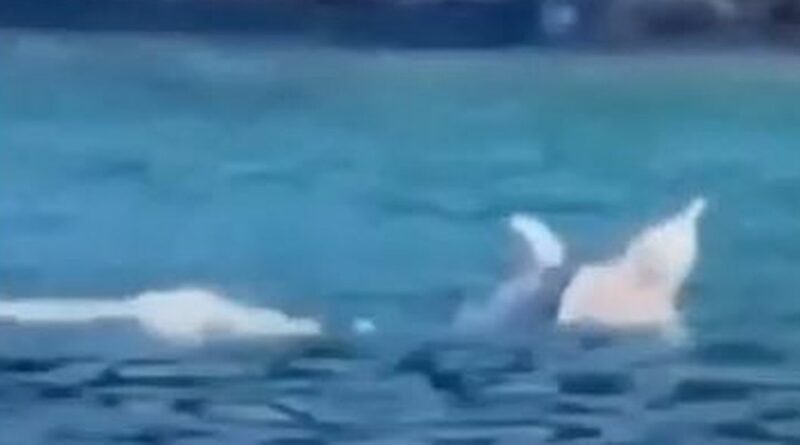 Terrified swimmers were forced to flee a beach when a 10ft shark sank its teeth into a dolphin in the shallow water.

The frenzied shark attack brought a surf carnival to halt after a pack of the beasts were spotted swimming close to the shore of Shelly Beach in north Sydney, Australia.

Aerial footage shared by 9News captures at least three bull sharks stalking a bottlenose dolphin at around 7am on Saturday (January 21).

One apex predator, measuring three metres long (10ft), circles the dolphin before it attacks the distressed mammal in front of a stunned diver.

Volunteers at Surf Life Saving were deployed to follow the wounded dolphin, which was eventually stranded and beached at the shores.

Tracey Hare-Boyd, duty officer for Surf Live Saving, said "The shark swam straight past a diver and hit it with the dolphin.

One diver said he didn't notice there was a shark attack until later.

"We just wanted to enjoy the hype of it, we didn't think of it as any danger until we surfaced and were told about the shark," he shared.

Emily Pettersson said she swam into the shallows after hearing about the wounded dolphin.

"I saw the dolphin swim past on one side and I saw a shadow on the right side," she added.

"So I turned around and there's probably about a three metre bull shark. But it wasn't even looking at me, it was just going for the dolphin.

"There would have been 200 swimmers in the water with the sharks going up and down.

"I think the dolphin had been attacked by the shark, the fin was mangled, you could see it was falling off."

A spokesperson for Taronga Zoo said the deceased dolphin was transported to the Australian Wildlife Registry based at Taronga Wildlife Hospital to undergo a necropsy."