The college in the southern Brisbane suburb of Carindale, which receives a combined $13 million in government funding, sparked public outrage this week after the principal issued the contract requiring students to sign or risk being excluded from the school. 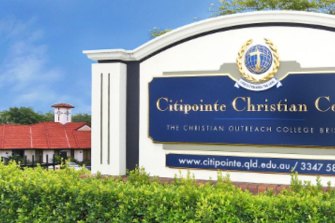 Speaking in an unscheduled interview, Mr Morrison told radio station B105.3 on Thursday morning that students should not be discriminated against for what they believed in.

“I don’t support that,” he said. “My kids go to a Catholic school in Sydney and I wouldn’t want my school doing that either.

Acting Education Minister Stuart Robert on Wednesday said he would be briefed by Queensland education minister Grace Grace on Friday.

“It’s important we all understand that every Australian child has the right to go to school, and we are absolutely committed to ensuring that our anti-discrimination laws are met, and the community expectations are met,” he said.

“There is no reason why any school would ever want to not have a child come to their school, regardless, full stop.

“I think the school needs to show a lot more grace.”

Mr Morrison said the school was not going against the current federal law.

“One of the bills that we are going to be taking through to Parliament, we’ll be having an amendment which will deal with that.

“The law, as it currently sits, would allow for that, but that’s what I’m trying to change.”

“Religious freedom isn’t just about people who have religion.

“It’s also about people who don’t, and you shouldn’t be discriminated against by what your religious faith is or isn’t.

“And that’s what the bill we’re trying to take through the parliament is all about.

“It actually protects and supports all Australians, whether they have faith or they don’t.”