Home » World News » ‘I feel like I am living someone else’s life’: Mother of soccer player in Perth ICU can’t give him a cuddle

The British parents of a soccer player fighting for his life in a Perth hospital were surprised by the welcome they received in Western Australia after visiting their son.

Peter and Nicola Hodgson, who said they were living “a parent’s worst nightmare”, arrived in Perth from the United Kingdom on Friday to be with son Danny, who was in an induced coma at Royal Perth Hospital. 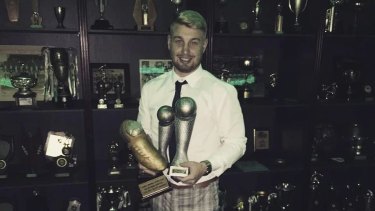 The couple, while dressed in full PPE, spent 30 minutes on Saturday at a safe distance from their son’s beside, with Mr Hodgson saying they were eternally grateful to authorities for granting them the visit under strict COVID-19 protocols.

“Not climbing into bed with Danny to cuddle him was the hardest thing I have ever had to do,” Mrs Hodgson said.

“I feel like I am living someone’s else’s life.”

Danny Hodgson was allegedly coward punched after walking home near the Perth train station in the early hours of last Sunday morning.

In a continued outpouring of support for the family, the heartbroken parents were surprised with a performance from their Pan Pacific hotel room by local pipe band members, who played Danny Boy, Amazing Grace and Waltzing Matilda.

Mr Hodgson junior also received roaring support from almost 80,000 fans who were at Old Trafford to watch Manchester United when stadium announcer Alan Keegan called on the capacity crowd during a break in play to cheer for the 25-year-old.

“His family and friends are recording messages of support as he tries to come out of his drug-induced coma,” he announced.

“So Old Trafford, can we come together to make some noise for Danny Hodgson.”

The ECU Joondalup player’s friend and former teammate Dean Henderson is a goalkeeper for Manchester United.

“Thank you to Dean Henderson and Team#DH7 for making this possible,” Mrs Hodgson wrote on Facebook sharing the video from Manchester. Come on Danny wake up.”

It comes after Mrs Hodgson took to social media thanking past and present teammates in both Australia and the UK, as well as complete strangers for their support, urging her son in one post to “come on” because “we need you back”.

“Thank you Wath Brow Hornets, another club Danny played for and made many friends along the way,” she wrote. “Your support is truly appreciated.”

In another post she thanked the “lads” for all their voice messages, telling them that they were played to Mr Hodgson as soon as they were received.

“You have all touched our hearts,” she wrote. “Danny Hodgson you have some great mates and support, no wonder you love Oz.”

The 25-year-old moved to Australia when he was 18 to play soccer and helped Kingsway Soccer Club win promotion before moving on to play for ECU Joondalup, where he won the league and the Golden Boot last season.

The much-loved “larrikin” was on his way home from the Perth CBD after an end-of-season game celebration when he was allegedly struck to the back of his head.

WA Police will allege that, without warning, a 15-year-old boy from Armadale punched Mr Hodgson, causing him to fall backwards and fall unconscious.

The boy, who cannot be named for legal reasons, has been charged with grievous bodily harm.

ECU coach Kenny Lowe described the striker as a good footballer and a popular larrikin within the club and broader soccer community.

“He’s vibrant, he’s very popular with all the guys,” he said. “He’s a good player but more importantly he’s a good person.”

Under WA COVID restrictions, the couple are required to complete the mandatory 14 days in hotel quarantine and be tested for the virus on two occasions.

The parents have both returned negative results from their first test.

“When circumstances warrant, visits to an immediate family member in a hospital can be arranged under stringent protocols, including testing negative immediately before the visit and the wearing of full PPE,” a WA Health spokesperson earlier said.

“[Chief Health Officer] Dr Andy Robertson will consider the circumstances at the time.”

Mr and Mrs Hodgson spent many days working with authorities to arrange a visit on compassionate grounds.

“The hospital has been constantly updating us on Danny’s condition and we believe he could not be in better hands at this moment, we are truly grateful,” Mrs Hodgson said.

Mr Hodgson’s close family in Perth and his partner Jess have been at his bedside 24/7 since he was admitted to hospital and have not left his side.

“Constantly holding his hand and talking to him has kept him comforted,” his mother said.

“This has been a parent’s worst nightmare, but the love and support from everyone has given us strength.

“We believe Danny will come out of this and, sometime in the near future, his sister Abby and brother Joe, along with his Nanna and Gary, can come and visit him at home.” 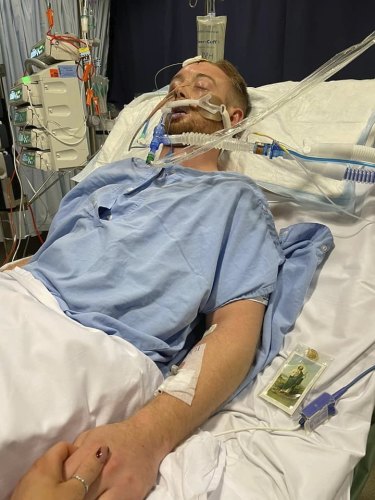 Danny Hodgson is in an induced coma in Royal Perth Hospital after a coward punch. Credit:Facebook