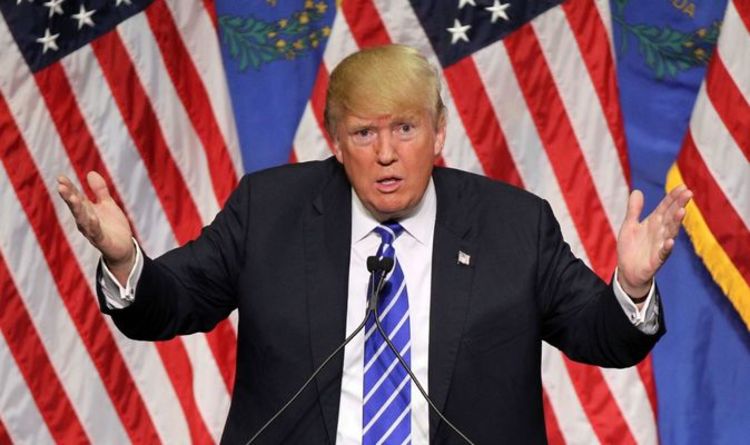 Donald Trump refers to himself as '45th and 47th president'

Donald Trump, 75, released a statement in which he took a dig at Joe Biden, 79, on his official website. In his post, the 45th President shared a meme which showed his successor in a pilot uniform.

The photo was accompanied by a caption which read: “I have a quick question… if this was the pilot, would you get on the airplane?”

Mr Trump responded to the meme with a two-word answer.

“I wouldn’t,” he exclaimed.

The dig comes just days after Mr Trump returned to the campaign trail for a ‘Save America’ rally in Texas.

Speaking to supporters in Conroe about 2024, the 45th President said: “We are going to take back the White House.”

JUST IN: Joe Biden blow as majority of voters believe President will be ‘worst in US history’

Later in his speech, Trump said: “My fellow Americans, this incredible journey we are on together has only just begun.”

He added: “We are one movement, one people, one family and one glorious nation under God.

However, Trump also suggested he would consider pardoning rioters from the January 6 Capitol insurrection.

Trump claimed: “If I run and if I win, we will treat those people from January 6 fairly.

“We will treat them fairly.

“And if it requires pardons, we will give them pardons.

“Because they are being treated so unfairly.”

Many pundits argue the 2024 race could be a rerun of 2020, with Biden and Trump standing on behalf of their respective parties.

However, recent opinion polls suggest the race could be much tighter than it was 15 months ago.

But now Trump has narrowed Biden’s nationwide lead and in some surveys has overtaken his successor.

In the most recent YouGov poll, Biden recorded just a one-point lead over Trump.

The lead, which is within the polling margin-of-error, is also down from the four percent victory Biden achieved in the last election.

Despite retaining his lead in the popular vote, the electoral college system could mean his predecessor has done enough to become just the second US President to serve two non-consecutive terms in the Oval Office.

When Mr Trump shocked the world to win the 2016 election against Hillary Clinton, 74, the former businessman still lost the popular vote by two percent.