In 1933, when Keith Hendy was seven years old, he used to get driven the five kilometres from the family farm to school at Katunga South Primary.

But not in a fancy car. It was his 10-year-old brother, Mervyn, who would convey Keith and their sister, Joan, 8, there and back in a small horse and cart. 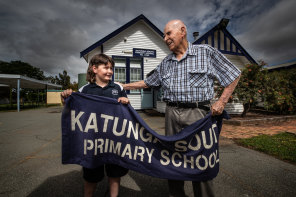 School’s out forever: Wyatt Hendy-Smith and his great-grandfather Keith Hendy, who have both attended Katunga South Primary School. Credit:Jason South

A ganger who lived beside the railway line would yell “woah Tot” — Tot was the horse’s name — when a steam train was coming. In the classroom, there was an open fire on cold days and no air conditioning in summer.

The teacher scratched away in chalk on the blackboard. Mr Hendy remembers playing marbles in the schoolyard.

On Wednesday, Mr Hendy, now 95, a retired farmer from Numurkah, took a nostalgic trip back to Katunga South Primary, 40 kilometres north of Shepparton, which will close for good after 141 years on December 17. 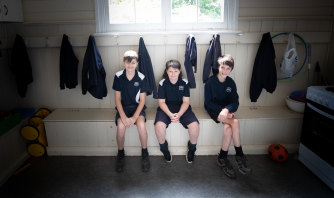 Keith Hendy’s great-grandson, Wyatt Hendy-Smith, 12, who gets to school by bus and uses a laptop in class, is one of just three students now at the school.

Wyatt’s father, Robert Smith, said the family chose to send him there and not to nearby Katunga Primary School, which has 85 pupils.

Mr Smith likes that children get extra attention — Katunga South has two teachers and two office staff — and he likes its sense of a close community.

Wyatt and classmates William Barnes and Corey Cook, both also 12, say they are good friends. 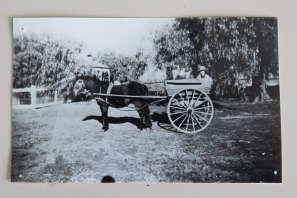 The horse and cart the Hendy children used to get to school in the 1930s.Credit:Hendy family

They can play their own music over the speaker system “as long as it doesn’t have too much swearing”, said William.

In the school grounds there are a football oval, a basketball and tennis court, a large playground, a cubby house, chooks and “the pit” – a former quarry.

“I’m sad that no one else will get to come here,” Wyatt said.

Katunga South Primary principal of 20 years Elizabeth Oudeman, who is retiring after being a teacher for 49 years, said she would “try not to cry” when she hosts a morning tea for the community to farewell the school at 11am on Friday.

The other teacher, Wayne Smith, is retiring after 47 years in the profession. 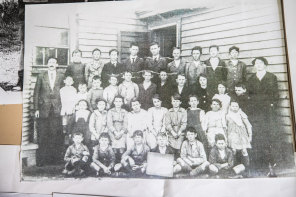 Mrs Oudeman said to close such a small school was the right decision for children’s education.

While the children received a good academic education, they missed out on camps, forming sports teams, playing in a band, “and just mixing with different kids”.

The school council had made the decision and the community had accepted it.

“It’s not a sad thing. It’s not the government shutting us down,” Mrs Oudeman said.

“The school will go into the history books with grace and dignity. We’re letting it go without being told to do so. On our terms.”