It was barely sunrise and Michael DeMasi jnr was romping through the corridors at a children's hospital in Philadelphia, balancing on a red line that was etched into the floor design and telling his mother to tie a balloon to him so he could "fly".

The four-year-old boy fancied himself a real-life superhero, wearing a blue T-shirt with photographs of his four-month-old twin brothers, who were born with a rare immunodeficiency disease. 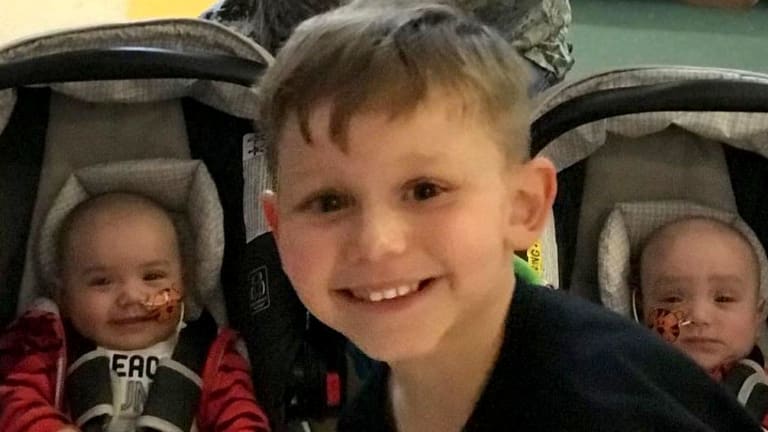 Michael DeMasi jnr, 4, with his twin brothers, Santino and Giovanni.

Michael's little brothers – Santino ("Sonny") and Giovanni ("Gio") – needed a bone-marrow transplant, and when his parents told him that he was a donor match, Michael told them that he wanted to save his brothers and would give them some of his.

"Hey, Michael," his mother, Robin Pownall, called out as she filmed her young son early one Thursday morning in March, running ahead of her through Children's Hospital of Philadelphia (CHOP).

"Yeaaaah?" he responded, hanging back to let her catch up.

"You ready to go?" his mother asked.

"Yay!" he said, pumping his fists and jumping up and down.

"Where you going?" she asked him.

"To save my baby brothers," he said.

"To save your baby brothers?" she repeated. "You're the best."

The boy knew what was about to happen, his mother said – a long needle would be pushed into the bone near his hip to extract the marrow, then the cells would be transplanted into his brothers.

He did it anyway.

Nearly two months after the procedure, the twins were discharged from the hospital last week. Their mother posted a video on Facebook, showing Michael wearing a superhero T-shirt, smiling and standing between his little brothers.

"I saved you guys," the preschooler said. "It's time to go home."

Santino and Giovanni were born in October with chronic granulomatous disease (CGD), in which the immune system does not work properly, meaning even a common cold could become life-threatening, their mother told The Washington Post.

She and her fiance, Michael DeMasi, were already familiar with the condition. Their oldest son, Dominick, 9, was also born with CGD and they knew it was a possibility that their other children would be born with the disease.

Following his diagnosis only weeks after his birth, Dominick was put on a transplant list and received stem cells from the umbilical cord of a donor. He is now considered cured, his mother said.

When the twins turned out to have CGD, Michael, who was not born with the condition, was tested and found to be a match. His parents talked to their doctors about the risks, such as pain and soreness and complications from anaesthesia, then they sat down with Michael and tried to explain.

Michael knew that his little brothers were sick and he knew that they needed bone marrow. He also knew that he had been tested to determine whether he was a match, his mother said.

His parents asked him whether he wanted to go through with the donation.

Pownall said her son asked whether his bone marrow would allow his little brothers to come home.

Pownall said her son told her he wanted to "help save my baby brothers".

But Pownall said the decision was not simple – she and her fiance grappled with the option, wondering whether Michael understood what was being asked of him and whether it was right to ask him at all.

Still, Pownall said, "We were in no way, shape or form going to push anything."

She said that had Michael hesitated or showed reluctance, she and his father would have put the twins on the bone marrow registry. But doctors told them that bone marrow from a matching family member was the best choice.

"He was all for it and we had a good feeling about it. It's amazing – he's so proud. Such a brave little guy."

She added that doctors at the hospital sat down with Michael and made sure he understood and that he was OK with it.

Art Caplan, a professor of bioethics and head of the division of medical ethics at the New York University School of Medicine, said situations in which children were the donors did present ethical questions, namely whether a child can truly understand the risks and grant their permission – a principle known as informed consent.

In addition, Caplan said, there might be risks to the donor – pain or other complications, and in instances in which the transplant is not successful, the donor may have to do it again or may begin to blame himself if the donation does not help or the recipient experiences a serious problem.

He said that, before such procedures were performed, he hoped to see an ethics committee review the circumstances to ensure there were no risks for the donor that the parents might not be considering.

But in general, "I'm inclined to allow it to happen," he said, assuming that those involved understood and accepted the risks.

On March 8, Michael marched down to the hospital's patient check-in area.

His mother had told him that he was going to be "a real-life superhero", and the small boy who loves Captain America as well as Spider-Man, Batman and Superman seemed excited to join their ranks.

The nurse told him that she was going to give him some "giggle juice" and he would go to sleep, his mother recalled.

Then Pownall was taken to a waiting room, where she said she sat anxiously, thinking about her son. "I thought it was going to be harder on him than it was," she said.

Michael woke up with small welts on his back, but insisted he was not in pain, his mother said.

Pownall posted a video after his procedure, showing Michael with blue Popsicle juice all over his face. "I've got a blue tongue," he said, sticking it out for the camera. "Because my Popsicle was blue."

Hours later, he was jumping up and down, watching his bone marrow go to work.

The children's aunt wrote on a GoFundMe page that Michael and his brothers were doing well.

"Michael did his procedure this morning for them to take the bone marrow cells," the post read.

She posted an update last week, saying the transplants were successful and the twins were home.

Pownall said that now the twins, who are nearly seven months old, showed no signs of the disease, although their doctors are monitoring them closely.

Michael, for his part, told the Post in a brief, distracted conversation that he felt "good" about helping his brothers.

The Post: "Hi Michael, my name is Lindsey and I'm a reporter."

The Post: "Can you tell me what you did for your baby brothers?"

Michael: "I saved them because I'm a superhero!"

(Michael moves away from the phone)

Pownall: "Michael, what did you give them?"