Imagine this is 1969. You’re roughly 70 years old. You’re remembering 50 years ago. The great guns of Europe have stopped. The industrial slaughter of a world war is over. You think in your youthful way that in 1919 peace will bloom. A League of Nations was only a year away. You couldn't know the Second World War was only 20 years away. Between the two, there were lesser conflicts and one giant revolution and civil war for the soul of Russia. The world was moving on tectonic plates of change. Forces were at play redefining the landscape. 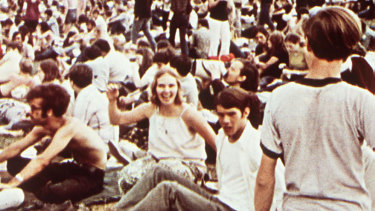 Woodstock wasn’t a mass movement of single purpose. It was not political per se. But in the personnel en masse it seemed to become so.Credit:Alamy

But now it’s 1969. World wars are no more, just regional conflicts, like Vietnam. But there are battles in the streets for civil rights and civil wars. The times are changing. There’s this thing called pop/rock music. Your grandkids think it’s going to change the world. There’s this festival happening, Woodstock it’s called. Three days of peace and music, it’s supposed to be.

Half a million people, give or take, turn up. At first they had to buy a ticket but when the crush became a tidal wave, it was free. The tide could not be held back. Freedom walked into a field and thought it lit a bonfire for the ages. It was a gathering of young people, for sure, probably the biggest ever. They were there to have fun. A month before, men had walked on the moon, now half a million are gathered in a field as a storm approaches chanting, "no rain, no rain". Such times.

Much is made of the line-up, but many stars have stayed away for various reasons. Bob Dylan was living a stone's throw away. He didn’t go, but turned up at the Isle of Wight two weeks later. Also not there: Led Zeppelin, The Doors, Iron Butterfly, The Rolling Stones and The Beatles (albeit it would have been a stretch. Their last public gig was on the roof of a building that January).

Jimi Hendrix’s performance, including an incendiary version of the American anthem, was seen and heard by virtually no one. By the time he came on stage, most people had left. In a year, he had also left life’s stage. Dead at 27.

Woodstock wasn’t even the first big outdoor concert. The Denver Pop Festival had been held a few weeks earlier. Hendrix had played there, too.

Still. Music and mythology is echoes.

Woodstock wasn’t a mass movement of single purpose. It was not political per se. But in the personnel en masse it seemed to become so. It did show, as did the massive street marches for civil rights, that many can speak, shout and sing as one. Before the internet of everything, it was the social media post that went viral. And in the way of these its shape changed. Peace and love at Altamont a few months later was violence, aggression and murder.

Woodstock, for all its music and vibe, was also the sign at the end of the road. That sign said: good times were had here, now everything changes. An unintended consequence was that it showed the corporate world that there was an ocean of opportunity to trawl.

Mythology may say differently. But mythology would. It’s ironic that the song that defined the event and, by extension to many, its generation, was a song written by Joni Mitchell, who wasn’t there. Woodstock is a beautiful work, compositionally, lyrically and emotionally.

Listening to it, you could believe you were stardust, golden, trying to get back to the garden, seeing the bombers turning into butterflies, feeling yourself a “cog in something turning”.

It’s how you shape the wheel that defines the journey. In the end, Woodstock was a rhythm of the times. Its echo barely a murmur.

Warwick McFadyen is a Melbourne writer.

Hunt for third worker who escaped from Covid-hit farm
Travel