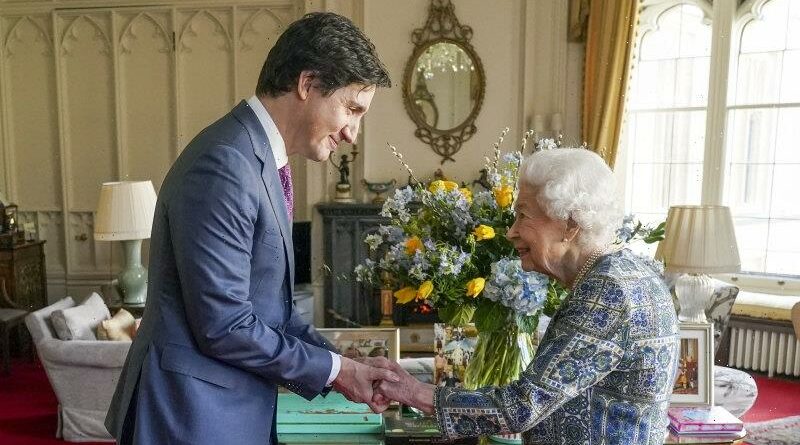 London: Queen Elizabeth II met with Canadian Prime Minister Justin Trudeau on Tuesday AEDT, smiling and greeting him in front of a large bouquet of blue and yellow flowers, the colours of the Ukrainian flag.

The audience was the Queen’s first in-person engagement since she tested positive for COVID-19 on February 20. Buckingham Palace declined to comment on the flower arrangement, but royal watchers say the Queen and her family leave little to chance when making public appearances. 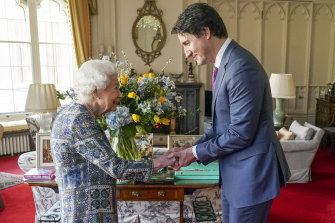 Trudeau was in the UK for talks on the Ukraine war with Prime Minister Boris Johnson and their Dutch counterpart, Mark Rutte.

Elizabeth, who is also the Queen of Canada, has visited the North American nation more than 20 times during her 70-year reign. She met with Trudeau at Windsor Castle, where she has spent most of her time since the outbreak of the pandemic.

The pair have known each other for some time. Trudeau, 50, met the monarch several times as a child because his father, Pierre Elliott Trudeau, was one of Canada’s longest-serving prime ministers. 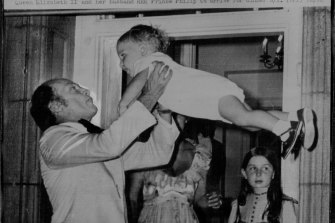 Canadian PM Pierre Elliott Trudeau throws his son – and future Canadian PM – Justin, up in the air as he waited at the front door of his residence to receive Queen Elizabeth II and her husband HRH Prince Philip to arrive for dinner in 1973. Credit:UPI

Pictures from the engagement show Trudeau warmly clasping Elizabeth’s hand in both of his, with the vase of blue and yellow flowers directly in the background. They both smile warmly.

Trudeau said he had had the privilege of knowing the queen for about 45 years, and “I can tell you that in my conversation with her this morning she was as insightful and perspicacious as ever.”

The palace’s February 20 announcement that Elizabeth had tested positive test prompted concern about the 95-year-old monarch.

The palace has declined to offer day-to day commentary on the monarch’s health, citing her right to privacy. But palace officials have said that Elizabeth has been fully vaccinated and has had a booster shot.