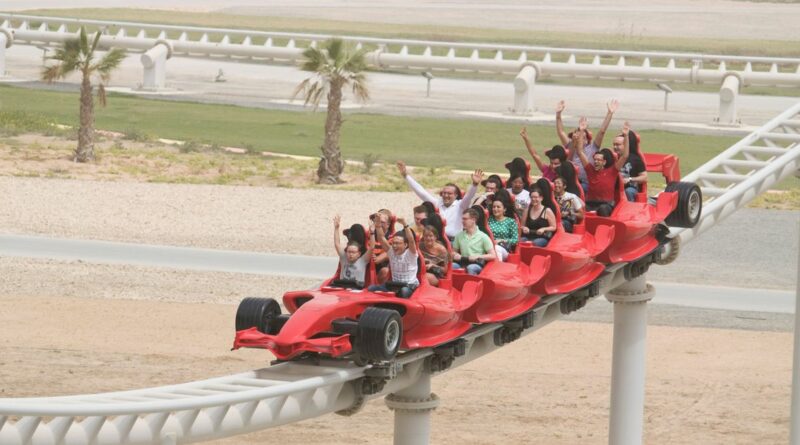 The world's fastest ever rollercoaster reaches a top speed of 149mph in just 4.9 seconds and riders are forced to wear safety glasses to protect their eyes from impact with insects or sand.

The Formula Rossa coaster, situated in the Ferrari World theme park in Abu Dhabi, was built to emulate the Formula 1 experience and brave riders even sit in a cart shaped like an F1 supercar.

The fast coaster is inspired by the famous Autodromo Nazionale Monza track, which features a range of "sharp turns and sudden drops" capable of generating up to 4.8 G, Motor 1 reports.

“The roller coaster’s goal is to bring the sensation of what a Formula One driver is experiencing,” Claus Frimand, director of Ferrari World Abu Dhabi, said.

“The incredible speed you’ll be taken to, you’ll be flying through the landscape.

The Formula Rossa is the fastest roller coaster ever built and reaches a top speed of 149mph (240 km/h), thanks to a state of the art hydraulic launch system similar to the equipment that steam catapults aircraft carriers, Oddity Central reports.

It took the crown as the world's fastest roller coaster when it opened in October of 2010 and nothing has managed to beat it since.

However, the top spot for the fastest rollercoaster could be snatched soon as Falcon's Flight, a roller coaster in Saudi Araba, is hoping to surpass it when it opens in 2023.

Earlier this month, a boy was rescued after getting trapped in a roller-coaster carriage at a theme park.

The terrifying incident happened at the M&D’s park in Motherwell, Scotland, over the weekend.

Never want to miss a story like this? You can get all of Daily Star's articles sent directly to your inbox! Sign up in seconds here!

Photos from the scene show the lad looking down while an engineer and a colleague in a suit try to rescue him from the stricken ride.

The pictures show a crowd of onlookers watching the dramatic moment as the workers scale the Mad Mouse ride to reach the motionless car.

It is unclear whether there were any injuries in the incident, which happened at about 6.20pm on Saturday and was down to a fault on the ride, a witness told the Daily Record.

“It was scary for my kids and me,” the witness added.