Incredible photos are bringing to life the striking complexities of the nuclear equipment created by the United States during the Cold War.

The images, captured by photographer and author Martin Miller, highlight the technological side of the country’s prolonged stand-off with Russia, which ran from after the Second World War until the early 1990s.

During that lengthy period, the two competing nations were locked in an arms race, constructing and stockpiling a sophisticated arsenal designed to inflict maximum catastrophe.

Miller – who has recently published two books cataloging the nuclear weapons designed by the US – writes on his website that ‘the formidable technical barriers to producing nuclear materials and designs gradually gave way, enabling weapons virtually unlimited in number and explosive power…. the last half of the 20th Century saw a frenzied strategic and technological competition that left us with the chilling array of doomsday machines’. 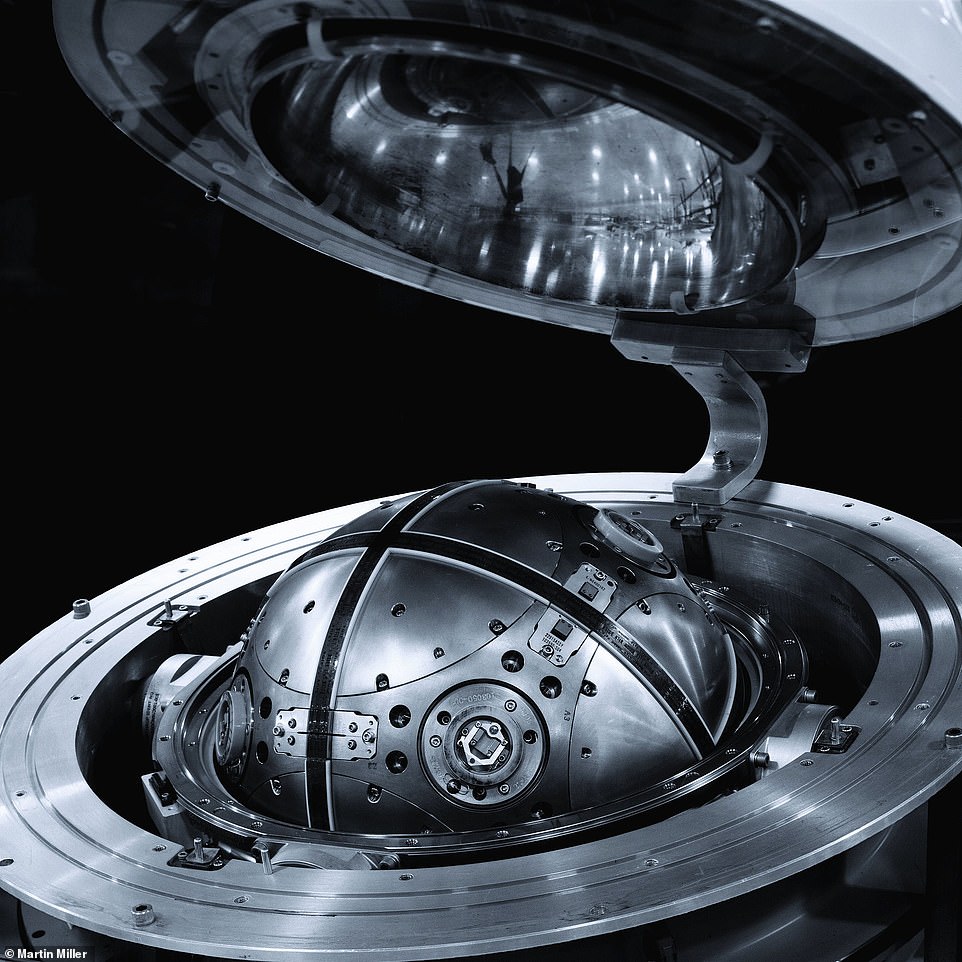 Chief among the sophisticated creations was the Advanced Inertial Reference Sphere (AIRS) guidance system, designed to help navigate a ballistic missile known as the MX Peacekeeper. Development of that missile first began in 1971, and built upon technological advances already made during the first 25 years of the Cold War. While the AIRS guidance system may look clunky and dated, the honing device is comprised of 19,000 individual parts, and helped to bring the accuracy of its precision down to just 130 feet

A series of pictures show the intricacies of the AIRS guidance system, which was extremely expensive and time-consuming in its construction. This slowed down the deployment of the MX Peacekeeper missiles until the tail-end of the Cold War. While there were originally plans for 100 MX Peacekeeper missiles, Congress capped the number at 50 in 1984. They were not put into service until 1986. 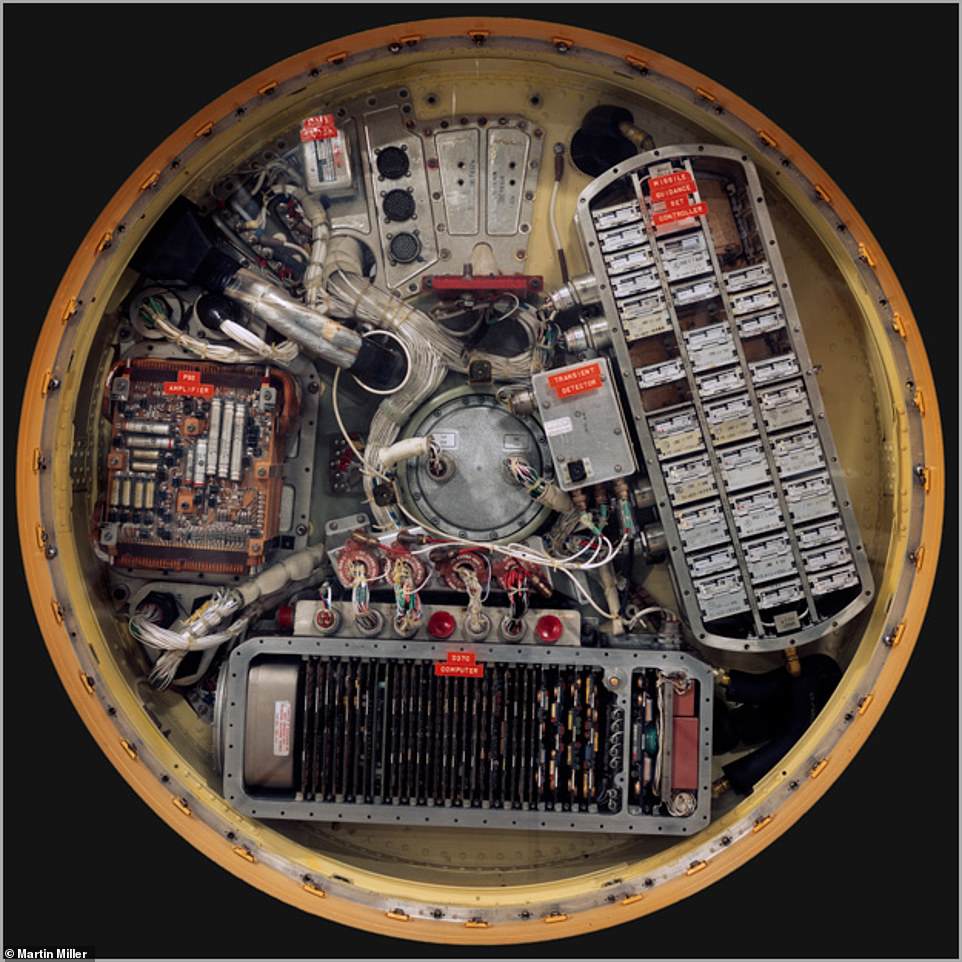 The AIRS navigational system built off the technology of the guidance system installed in the Minuteman II ballistic missile, which first entered service in 1965. An incredible color photograph captured by Miller shows all the moving parts of that navigational system, known to engineers as the ‘Inertial Guidance Set’. While the AIRS system was able to reduce accuracy to 130 feet, the Inertial Guidance Set had a less-impressive strike precision of around 1 mile 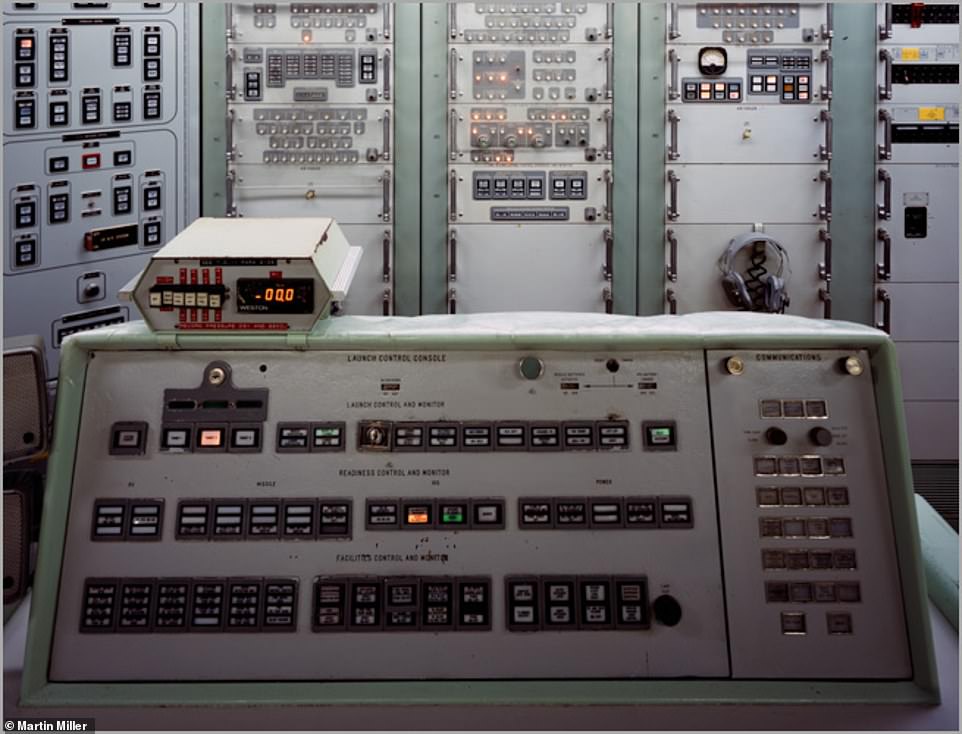 Miller has not only photographed nuclear weapons constructed by the US during the Cold War, but also the control consoles needed for their launch. One image shows the console for the Titan II missile, unveiled in 1963 – the year after the Cuban Missile Crisis. The Titan II missile was intended to be launched from an underground control capsule connected to the silo in which the missile was stored. Two missile operators would have to be given an order from the President in order to launch the Titan II. Once an order was given to launch, an audio transmission of a seven-letter code would be broadcast to each of the operators standing at the control console. They would both have to enter the correct code for successful launch of the nuclear weapon. 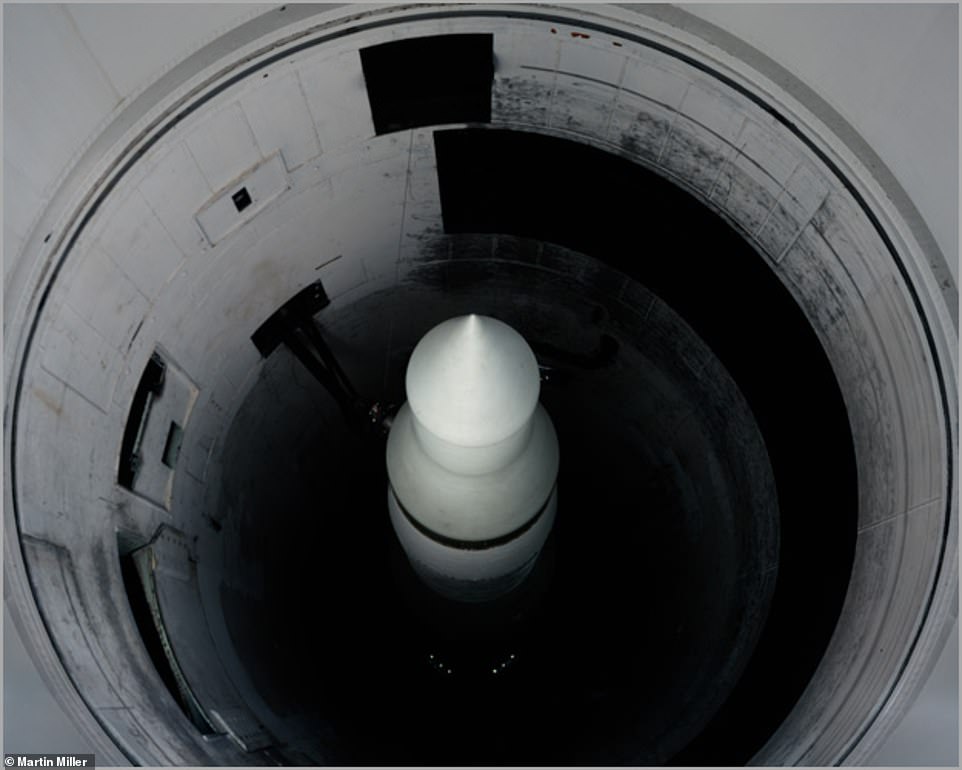 The warhead of the Titan II missile is pictured. The weapons were  stored in underground silos that were specifically hardened against nuclear attack. This was so it could be successfully counter-launched if the Russians had already destroyed the land above. The missile had a maximum range of 9,300 miles – meaning it could easily target Moscow should the US have launched a nuclear attack on its enemies. The Russian capital is located 6,000 miles from the west coast of America 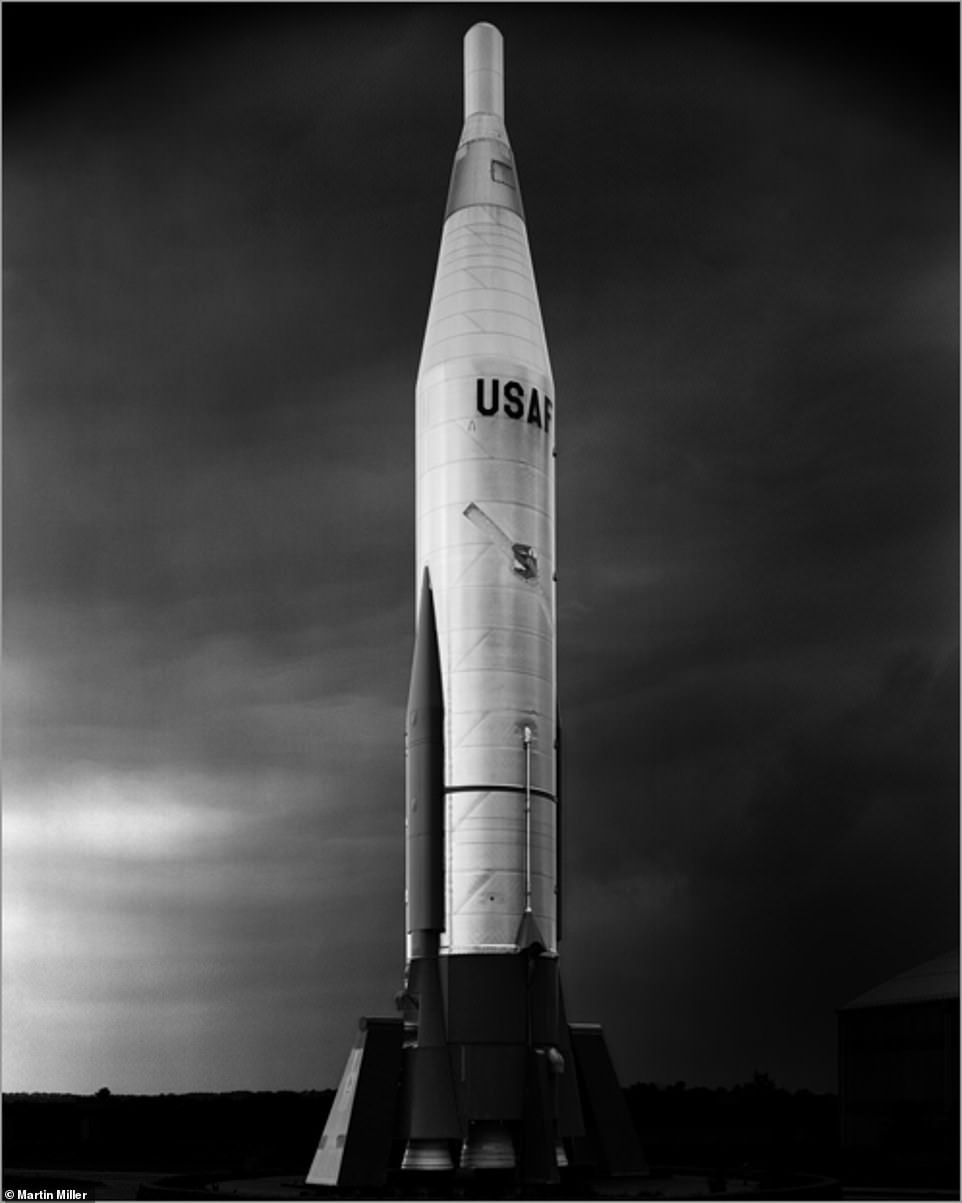 The Titan II ballistic missile is pictured in all its glory. The nuclear weapon first came into service in 1963 and stood ready to launch for 24 years.  There were originally 63 Titan II missiles, with eighteen of them on 24-hour continuous alert at an Air Force Base outside Tucson, Arizona. The missile was eventually taken out of launch capacity in 1987. Each launch of the Titan II cost the country more than $3 million. 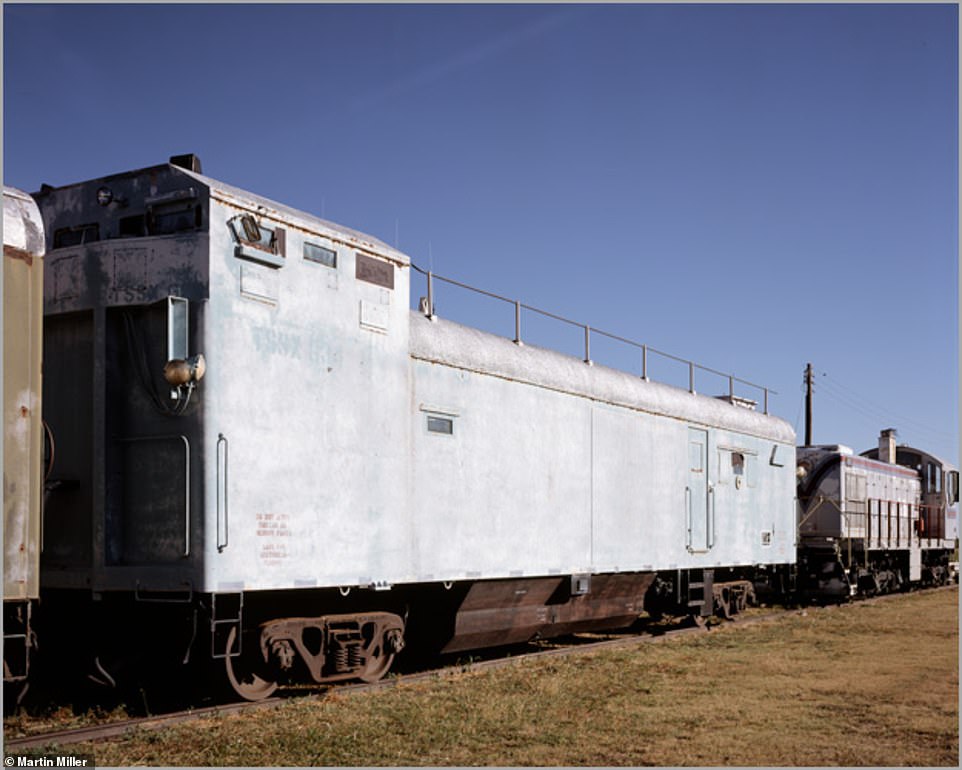 Nuclear weapons manufactured by the United States were transferred across the country in an armored train known as ‘The White Train’. The train was in operation from 1951 until 1987. Despite its name, the Department of Energy’s Office of Secure Transportation changed the colors of the railroad cars numerous times over the years so as not to attract adverse attention. Protesters often attempted to block the passage of the train after it set out on its journey from the  Pantex Plant in Texas – where most nuclear weapons were constructed. After 1987, the government decided to transport nuclear weapons via armored trucks 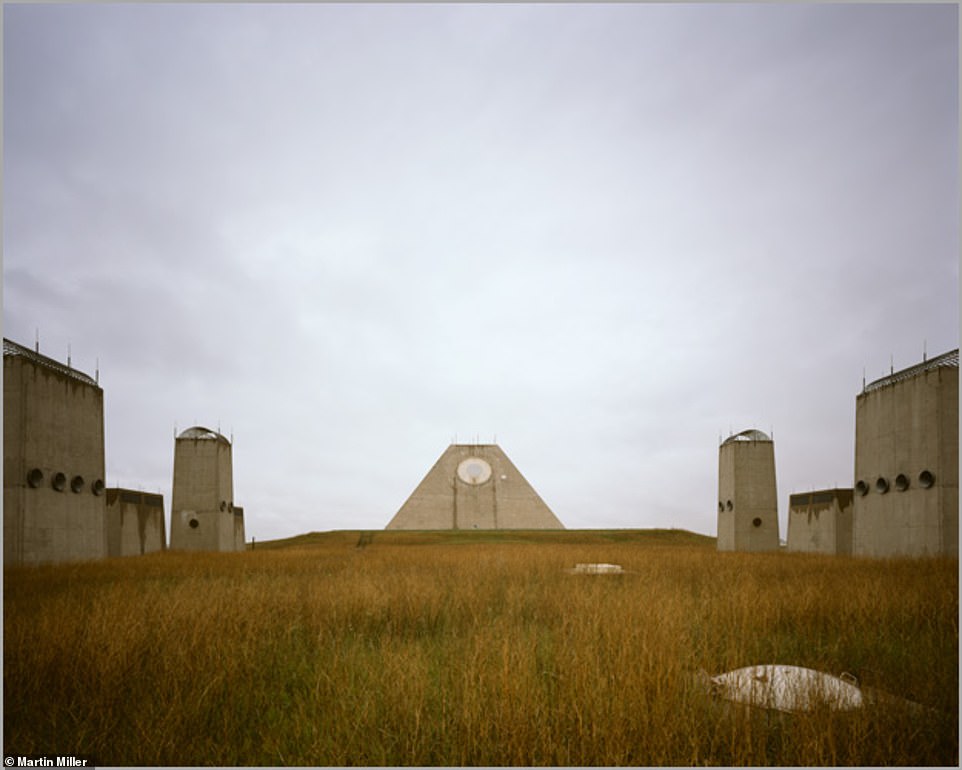 Above is one of Miller’s photographs of The Stanley R. Mickelsen Safeguard Comple, located in Nekoma, North Dakota. The military facility was designed to cater for the launch and control of 100 anti-ballistic missiles – all of which were to be held in underground silos. But while the complex achieved operating capability in April 1975, it was deactivated less than a year later after Congress deemed it ‘ineffective’. The above image shows the desolate and abandoned site 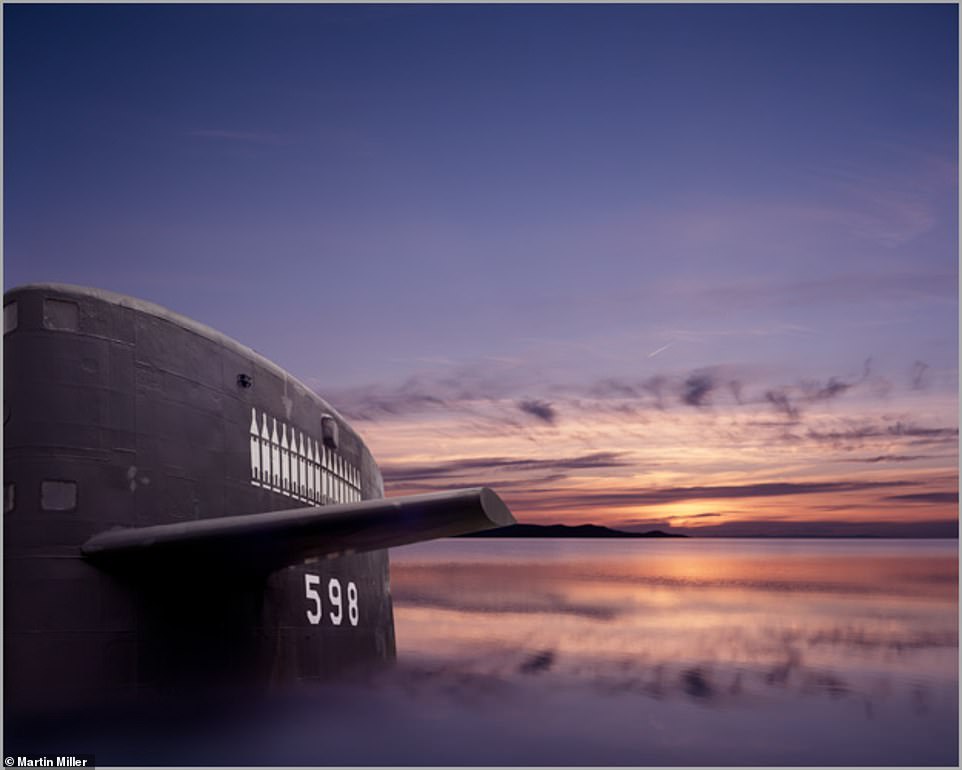 Miller has also photographed equipment used in the early stages of the Cold War, when nuclear technology was still in its infancy stages. One image on his website shows the USS George Washington – the United States’ first operational ballistic missile submarine. The nuclear sub was first commissioned in 1959, and made 55 deterrent patrols in both the Atlantic and Pacific oceans across the next 25 years. In comparison with the detailed images of the navigational systems, the submarine appears relatively unsophisticated – which helps to highlight the incredible technological advances which were made by the US across the Cold War years. 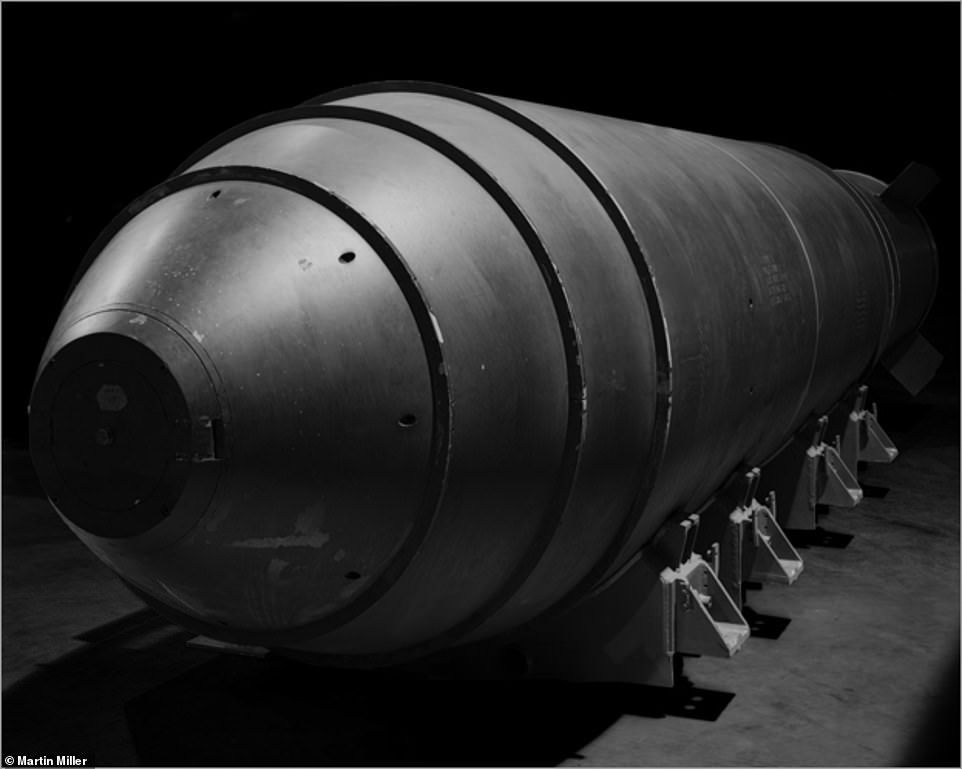 The Mark 17 Thermonuclear bomb has been photographer by Miller in intricate detail. Five of the bombs were added to the United States’ nuclear arsenal between April and October 1954. However, in May 1957, one of the large weapons accidentally fell from a plane as it was being carried over an Air Force Base in New Mexico. The device accidentally fell through closed doors of a B-36 bomber as it was in the process of landing. Plutonium pits were stored separately on the plane as a safety measure, meaning that a nuclear disaster was avoided. However, the incident spread radioactive contamination for more than a mile around its impact zone. The Mark 17’s were subsequently taken out of service later that year. 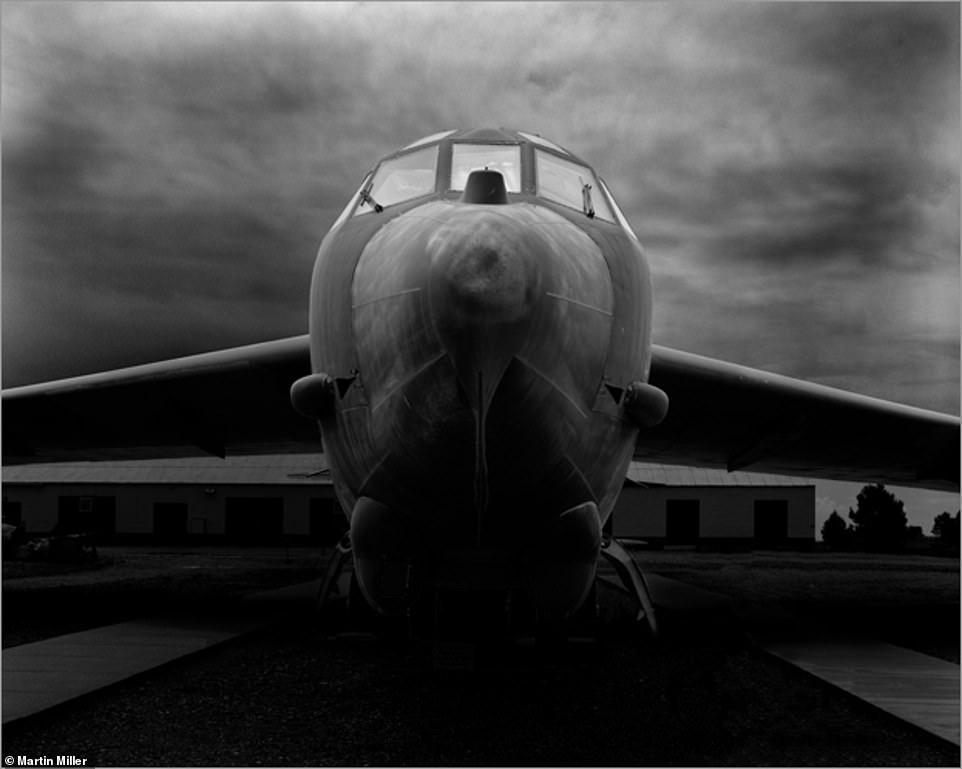 The B-52 Strategic Bomber is pictured in a black and white photograph by Miller. Designed and built by Boeing, the first bomber was completed in 1955  and was capable of carrying up to 70,000 pounds worth of weapons. 744 B-52 bombers were produced  in the seven years up to 1962.  Each aircraft cost $14.43 million to manufacture.  In today’s currency, that is the equivalent of $104 million per aircraft, or $77.3 billion collectively. Despite the end of the Cold War, many of the planes continue to to be used by the Air Force. As of December 2015, 58 of the B-52 bombers were still in active service, and a further 18 of them were in reserve.