This is the incredible moment a cop saves a three-year-old boy from choking.

The youngster had swallowed a quarter and was in floods of tears as he desperately tried to cough up the coin outside a car wash in Oklahoma.

But Deputy William Wheeler heroically stepped in to help and slapped the child vigorously on the back. Within seconds he spat out the quarter onto the pavement.

‘Is it out of your throat, baby?’ the child’s panicked mother Victoria Terrill can be heard asking in the three-minute clip, captured by the deputy’s bodycam on June 7.

The quick-thinking deputy can be seen holding little Chaz firmly by his left arm while assertively tapping on his back during the worrying incident at 7.40pm.

‘You ok buddy?’ the kindhearted deputy asks after the quarter popped from the child’s throat and bounced onto the tarmac.

Ms Terrill said she is forever thankful the deputy was there just at the right time. 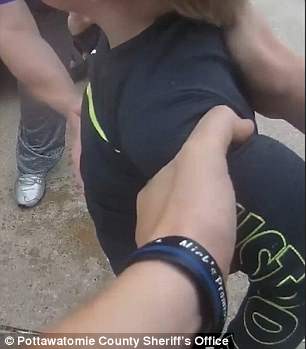 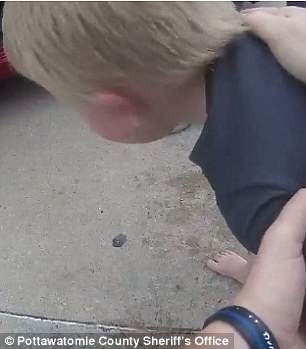 Deputy William Wheeler heroically taking control of the panicked situation in Oklahoma, gripping the child firmly by the arm and slapping on his back

Chaz is comforted by his mother after the worrying incident. ‘You ok buddy?’ the kindhearted deputy asks

‘He literally was like a guardian angel,’ she said.

‘He just happened to be going by at the exact time I needed him.’