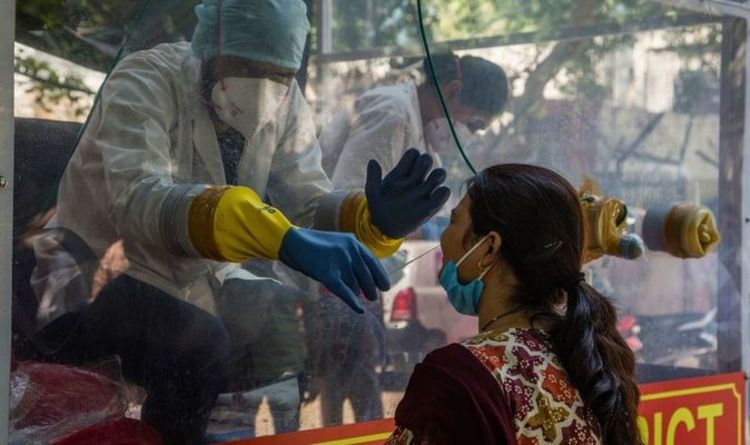 The excess deaths are a measure of how many people have died in comparison to what is expected compared to the previous years. India is one of the few major economies that still doesn’t have an estimate of this number during the pandemic.

Officially, the country recorded more than 414,000 Covid deaths so far, however, researchers from Global Development found that excess deaths are estimated to be ten times the recorded number.

The US-based researchers examined deaths across seven states – which accounts for half of India’s population.

They also looked into country wide antibody tests which gave them an insight to age-specific infection fatality rates.

Thirdly, they analysed a survey of 868,000 people, asking if they had a family member die in the past four months.

READ MORE: Delta variant symptoms: The key DIFFERENT symptoms to look out for

Their conclusions found that the excess deaths in India are estimated to be between 3.4 million to 4.7 million, not the 414,000 deaths that have been recorded.

“True deaths are likely to be in the several millions not hundreds of thousands, making this arguably India’s worst human tragedy since Partition and independence,” the report said.

The researchers did caution that their methods have weaknesses.

For instance, the survey asking people if they had a death in their family did not include a cause of death.

Researchers said that the “critical take-away, regardless of the sources and estimates” was instead that the actual deaths in the country during the pandemic were “likely to be far greater than the official count”.

Dr. Jacob John, from the Christian Medical College at Vellore in southern India was not a researcher for this project, but commented that it highlights the devastating impact the pandemic had on the country and its unprepared healthcare system.

“This analysis reiterates the observations of other fearless investigative journalists that have highlighted the massive undercounting of deaths,” he told Associated Press.

Many Indian journalists have also published death numbers that are higher than those recorded from some states using government data.