An Indian elephant is fitted with a prosthetic tusk by its owners – as activists say the practice is cruel and must be stopped.

In the video, music plays and an elephant rider can be seen sat atop the great beast.

The animal is owned by the Cochin Devaswom Board, a trust appointed by the Kerala Government to look after Hindu temples in the area.

Many Hindu temples own elephants which are used and ridden during festivals. This animal lost its right trunk in an accident two years ago.

But the footage, captured on Wednesday May 2 this year in Kathrikadavu, may hide a darker secret.

Animal Welfare activists say there is nothing heartwarming about the video.

In Kerala, privately owned elephants rake in huge sums of money when they are rented out for temple festivities. The animal, owned by the Cochin Devaswom Board which oversees Hindu temples in Kerala, was fitted with a prosthetic tusk after losing its own in an accident two years ago

They claims the artificial tusk was attached to the elephant to make it more appealing to the crowd.

Rajeev N Kurup, an Indian elephant activist, said: ‘The prosthetic tusk is fitted onto the stump of a rotten tooth with the help of screws and steel plates in a rather painful process.’

‘It is crude and the poor elephant has to endure the pain of the artificial tusk pushing against his often inflamed, swollen gums,’ he added.

He pointed that many temple elephants are forced to carry prosthetic tusks and urged the government to stop the cruel practice. 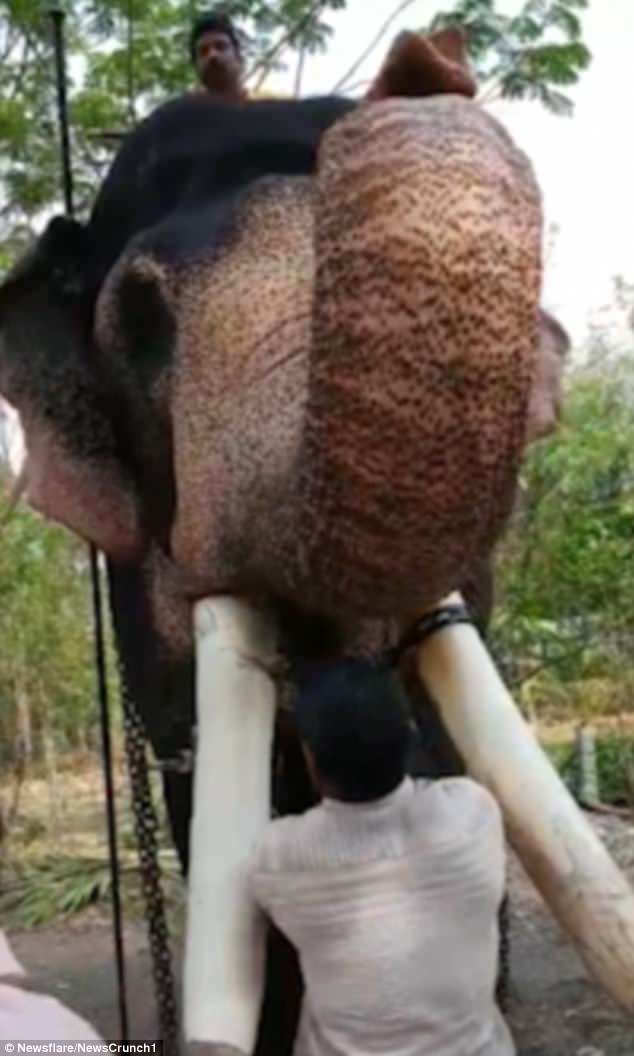