Vigilantes have killed at least five people and beaten 20 others after believing ‘fake news’ spread by social media warning that gangs of child kidnappers were searching for youngsters.

Police in Telangana and Andhra Pradesh, India, are on ‘high alert’ after mobs of terrified villagers ‘mercilessly’ assaulted people they suspected of being child traffickers, including one man who was visiting a relative.

Calling for calm, officers said there was no indication that such gangs actually exist. Indian police have called for calm, saying there is no indication that any such child kidnapping gangs exist. They want people to contact them first before taking matters into their own hands

The villagers suspected the driver was a child abductor, but the victim was leaving for his nearby hometown after visiting his brother in the village, he added.

Two deaths were reported in similar attacks earlier this week in other villages in the state.

On Tuesday night, Nimmala Balakrishna was allegedly lynched in Ziapalli, within the Yadadri Bhuvanagiri district, after going to the village to visit one of his relatives.

At about 8pm, several vigilante youths accosted him and beat him badly after he failed to give ‘proper answers’, said the Hindustan Times.

And in Chengal village, two young men were tied with ropes and beaten mercilessly with iron rods and sticks by locals, who suspected that they were involved in child trafficking – yet they had apparently gone to the forest area to pluck mangoes.

Reddy urged people against believing such ‘fake news’ and warned against taking the law into their own hands: ‘if you find someone suspicious please inform the police.’

A woman from eastern Bihar state was thrashed by a mob at a railroad station in Guntur district in Andhra Pradesh state and was hospitalised in a critical condition after she was suspected of seeking to abduct children, lead state police officer M. Malakondaiah said. 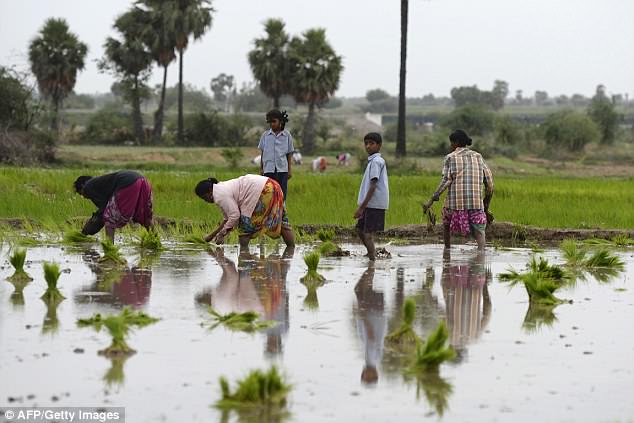 As she did not know the local Telugu language, this created a misunderstanding with local villagers, he explained.

In Bangalore, the capital of neighbouring Karnataka state, police detained nine people for tying a person to a tree and beating him on Tuesday, senior police officer T. Suneel Kumar said.

This was despite there being no incidents of gangs abducting children – contrary to video messages circulating on social media.

Kumar said today that the postings on social media were stoking fear, and villagers had formed vigilante groups to look for suspected abductors.