Delhi: A 23-year-old rape victim was in a critical condition after being set on fire by a group of men, including two of her alleged attackers, as she travelled to court in northern India yesterday (Thursday).

The attack came after thousands took to the streets of several Indian cities this week to protest against the rape and murder of a 27-year-old vet in Hyderabad. They called for rape cases to be fast-tracked and for rapists to be given tougher punishments.

A survey of 550 women's issue experts by the Thomson Reuters Foundation last year found India was the worst country for sexual violence. Some 32,000 rapes were recorded by the country's national crime records bureau in 2017 but 99 per cent of attacks are thought to go unreported. 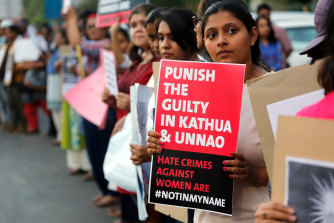 Years of protests have failed to stop attacks against women in India, which has a poor record on sexual violence.Credit:AP

The rape victim was on her way to catch a train to the Unnao district of Uttar Pradesh when the mob doused her in kerosene and set her alight. Doctors at the Civil Hospital in the regional capital, Lucknow, said she had suffered 90 per cent burns and would need to be taken by air ambulance to Delhi for further treatment.

Police documents show the woman had filed a case with officers in Unnao, alleging she was raped at gunpoint in December 2018. One alleged rapist was released suddenly last week after securing bail, a force spokesman said.

Yesterday, police in the central state of Madhya Pradesh said they had arrested a man on suspicion of raping and murdering a girl aged four.

Local media also reported that a teenager was gang-raped and killed in the state of Bihar, east India, on Tuesday.