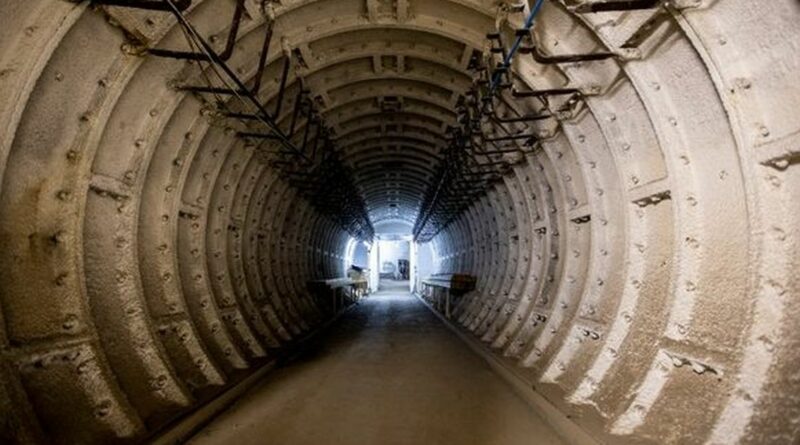 Incredible photos show the inside of a military bunker built to protect Queen Elizabeth if nuclear Armageddon struck the planet.

The vast structure was built 100 feet beneath the ground during the the 1940s before being expanded in 1952 during the early days of the Cold War.

Named Barnton Quarry Nuclear Bunker, the impressive info-structure was built beneath Corstorphine Hill, an area in the suburbs of Edinburgh, reports EdinburghLive.

During the Cold War there was great suspicion and heightened tensions between the West and the Soviet Union with genuine concerns that nuclear holocaust could end humanity.

The bunker in Edinburgh would be used to protect the Queen and other dignitaries if she was in residence at the Scottish capital during a nuclear strike.

The gigantic structure was spread over three floors, featuring a 30,000 square foot underground building and capable of keeping Britain's most important figures safe.

The Thunderbird-esque fortress was equipped with a BBC broadcasting studio and would have housed the Queen and any members of the British Government along with members of the military, the police, fire and ambulance, and BBC staff.

The site is one of the largest subterranean military sites in the UK with the capability to act as the centre of governance in the event of war.

The existence of these emergency Regional Seats of Government, or RSGs, existence was a secret until 1963 when an anti-war activist group called Spies for Peace broke into a similar secret government bunker in Reading and exposed the nationwide scheme, publicising government preparations for rule after a nuclear war.

They photographed and copied documents they found in the bunker and published their findings in a pamphlet called Danger! Official Secret RSG-6 . Thousands of copies were sent to the press, politicians and peace activists as well as on CND marches.

Members of Spies for Peace were concerned that the RSGs hadn’t been publicly debated and that their occupants would not be democratically elected and would have military powers.

Although several people were arrested, the original spies were not identified or caught.

Rumours that a green telephone box hid the entrance are unsubstantiated, although some locals insist they remember seeing the edifice on the hill until it was removed.

An unknown author on the Secret Scotland website claims: “With regards to the Green Telephone, I confirm this as true.

"The Green Telephone Box was very strangely, so very noticeable, it stood out like a sore thumb on top of a man made mound with grass on it, with concrete steps leading up to it."

The Edinburgh site wouldn’t be decommissioned until 1983, and two fires would later ravage the building rendering it unusable and full of asbestos.

Since 2005 it has been under private ownership with Scotscrown Ltd, where the owners intend to turn it into a museum, hoping to turn one of Edinburgh's best kept secrets into one of its most exciting tourist attractions.