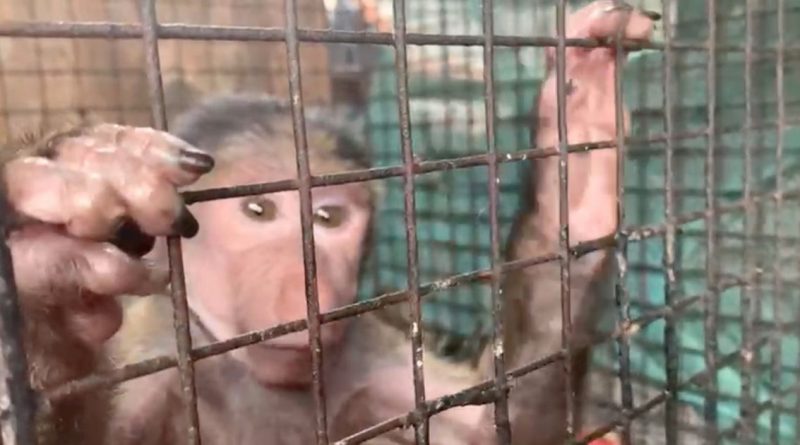 A charity has rescued a number of animals from being "slaughtered or boiled alive" at a Nigerian wet market amid fears they could spark the next global pandemic.

The first outbreak of SARS-CoV-2, the pathogen causing the Covid-19 pandemic, is widely believed to have occurred at The Huanan Seafood Wholesale Market in Wuhan, China.

Since then, campaigners have been calling for wet markets across the world to be shut down because they have "endangered the health of the entire planet".

And now one charity has visited a market in Nigeria, saying it fears wet markets in the country could be a "timebomb" for the next global disease outbreak.

In a statement on its website, the charity said: "WildatLife is working intensively, both undercover and emergency, in the notorious Nigerian wet-markets.

"The trafficking is decimating the wildlife population and are places that gives birth to pandemics. We need a government level both on national and international level to stop the trade.

"This is why the work of Wildatlife is so very important and can see the NGO undercover teams face grave dangers working to investigate wildlife trafficking and wet-markets to put an end to illegal trade. We must ban wet markets globally.

"Wet markets can be “timebombs” for pandemics and have been the source of documented disease outbreaks in the past, including Sars and Covid-19.

"In the past month our team has rescued eight pangolins, one duiker, a sea turtle and an infant baboon from being slaughtered or boiled alive. We have also successfully released most of these pangolins back to the wild.

"We need to stop the trade globally, otherwise we will lose the pangolins and many other species while we also will run the risk of having more future pandemics and zoonotic diseases."

A shocking video shows one animal, later identified as a dog by vets due to the skull formation, being boiled alive in a tub of dirty water.

Another horrifying clip reveals a man skinning a baby crocodile alive with a knife, mercilessly removing the scales from the creature’s face.

Meanwhile, a woman can be seen proudly showing off slaughtered animals’ heads with their skinned bodies displayed on a metal rack, as another clip shows a bucket of cooked monkey body parts being prepared for a meal.

Experts fear sites such as this one could encourage more diseases spreading from animals to humans.

Malcolm Bennett, Professor of Zoonotic and Emerging Disease at the University of Nottingham, told MailOnline: "If you were to want to maximise the risk of zoonotic transmission you would mix human contact with a wide range of animals — domestic and wild — and bring them together both alive and dead in the same area."

He added having so many different species in close proximity makes it more likely something will spread.

"All animals are infected with something and only some are infectious to humans," Professor Bennett said.

"Having more animals in the same space and in close contact with each other makes it more likely something will emerge in humans.

"The more biodiverse an area/country is (in the tropics for example), the higher risk there is that something is going to emerge.

"There is an almost 100 per cent risk of something emerging in humans, but we can't predict where that will be or what that will be."