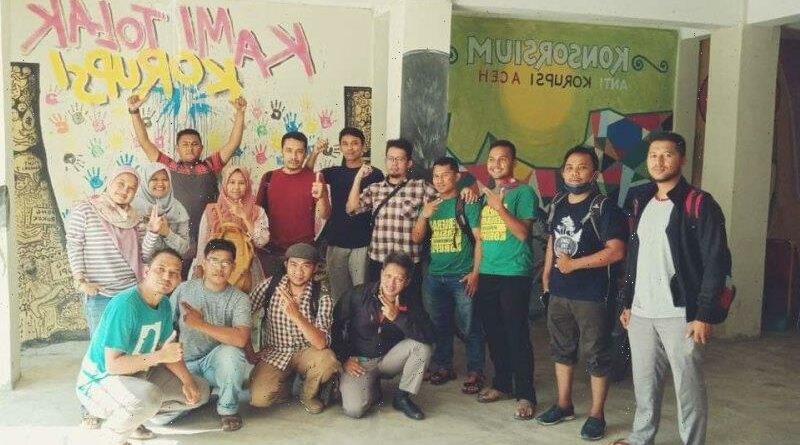 Singapore: Located within a rundown building in Banda Aceh, the capital of Indonesia’s westernmost province, the SAKA Anti-Corruption School of Aceh is nothing much to look at.

It has a single classroom and the university-age students studying here sit in a circle on the floor as they take their tuition. 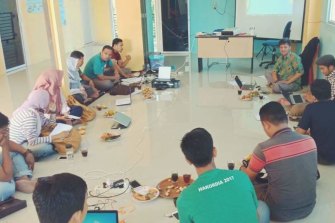 Students in class at the anti-corruption school in Banda Aceh.

Within its walls, however, a new generation of would-be government officials has come together, fused by a desire to help rid their country of its rampant corruption.

Since it opened in 2011, students at the school have helped expose many cases of graft which have then been prosecuted.

The most prominent was the conviction of former Aceh governor Irwandi Yusuf for taking bribes for infrastructure projects, leading him to be jailed for seven years in 2019.

Another incidence of wrongdoing they have reported to police and local authorities was a parking fee racket discovered in Banda Aceh.

“Our students come from various places in Indonesia. They just happened to study in Banda Aceh,” school principal Mahmuddin told The Sydney Morning Herald and The Age.

“So when they have gone back to their home towns and found possible cases [of corruption] we have helped advocate.”

The school’s year-long course is voluntary and free and was written by activists from Gerak, an anti-corruption group in Aceh. Classes run twice a week but students also spend six months in the field, hunting down examples of misconduct in action. 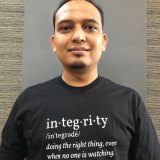 Then they are dispatched to elementary and high schools to talk about the values they’ve learnt and the crooks they’ve tried to chase down.

“Our seniors – anti corruption activists from Gerak – left the social movement one by one because they joined political parties or became expert staff at government agencies,” Mahmuddin said.

But it is a David versus Goliath battle.

More than two decades after the fall of Suharto’s New Order and the start of the Reformasi era, the world’s third-largest democracy is still rife with corruption.

On Transparency International’s latest Corruption Perception Index, Indonesia ranked 102th out of 180 countries, down 17 places since 2020 and level with Gambia, a brutal dictatorship until only five years ago. 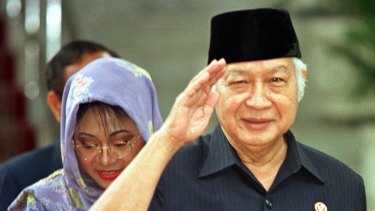 “In [Sukarno’s] Old Order, corruption was carried out under the table,” former Indonesian president Abdurrahman Wahid, known as Gus Dur, once said.

“In the New Order era it was on the table. In the Reformasi era the table was corrupted.“ 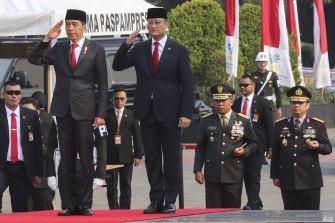 Four weeks earlier, Edhy Prabowo, the minister for Maritime Affairs and Fisheries until November 2020, was jailed for five years over graft related to the export of lobster larvae.

Now, in the latest major probe announced this month, Azis Syamsuddin, the deputy speaker of Indonesia’s lower house and a senior figure in the Golkar Party, which holds the second most seats in Parliament, is being investigated over alleged bribery.

The tentacles of corruption run far and wide, from the corridors of ministerial offices to district, city and village bureaucracies.

This week Indonesia Corruption Watch, a non-government organisation, reported there had been 62 new corruption cases identified in the first half of this year alone in villages which receive 72 trillion rupiah in government funding a year, as well as 60 cases at district level and 17 in city administrations. 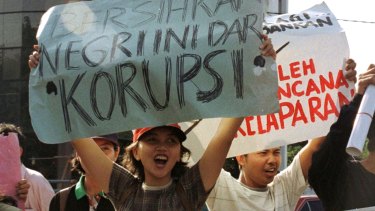 Old problem: Students hold up posters reading “Clean the country of corruption” during an anti-government protest in Jakarta in 1977.Credit:AP

But the country’s ability to fight corruption has been severely curtailed by the significant weakening of its Corruption Eradication Commission (KPK), which was established in 2002 and which has had no shortage of its own high-profile scalps among near 1000 convictions.

Top KPK officials have been arrested over the past decade and more recently, and leaders and investigators have been targeted physically for doing their job. 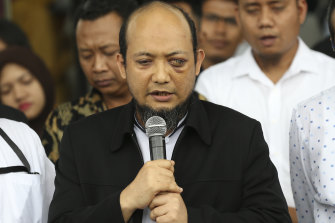 Among them was a senior investigator, Novel Baswedan, who was in 2017 doused with acid on his way home from a mosque, leaving him blind in one eye. Others have been assaulted or had guns pointed at them.

Then, two years ago, the homes of KPK chief Agus Rahardjo and deputy Laode Syarif were targeted with homemade bombs.

“Counter-attacks carried out by corrupters have been going on for a long time, however they are more systematic and intensive in the past couple of years,” Novel said.

The KPK could continue carrying out investigations as usual until a controversial revision of a law in 2019. The revision limited the commission’s powers in areas such as wire-tapping, decreed that cases could be dropped after two years and, crucially, removed the watchdog’s independence, rolling it into the civil service.

As part of that transition the KPK’s 1300 staff were subjected to a “civic knowledge test” by intelligence agencies in which they were asked a range of bizarre questions including about their sex lives and whether they thought “all Chinese were the same”, “all Japanese were cruel” and whether homosexuals should be given corporal punishment.

A total of 75 staff members, including some top investigators, failed what amounted to a test similar to an entrance exam and 57 of them were suspended.

Novel was among those who didn’t pass and has been fighting to be reinstated. “This is a very serious issue,” he said. “They carried out a profiling on people who were targeted to fail in the tests. I suspected in the beginning that I would be removed but I didn’t expect they would do it like this because it is so ridiculous to use [the tests] to get rid of us.”

The tests have been slammed by Indonesia’s National Commission on Human Rights but their validity has been upheld by the Supreme Court and the employees face dismissal unless the President, known as Jokowi, himself intervenes.

There has also been criticism of new appointments to the KPK leadership since 2019, most notably the chairman Firli Bahuri, a former South Sumatra police chief who was handed the reins by Parliament despite misconduct allegations over his acceptance of 600 free tickets to a concert by Irish boy band Westlife.

Novel labels the current leadership the “worst” in the watchdog’s two decades and deplores its propensity to drop off investigations now. He said they were prevented from digging deeper in the case of jailed social affairs minister Juliari, stopping them from exposing a network of other corrupt officials.

“The [network of] corrupt practices … it’s a huge case that should have been uncovered more broadly,” he said.

“Those arrested were just people on the surface.”

Zaenur Rohman, an anti-corruption researcher at Gadjah Mada University in Yogyakarta, believes the KPK is being eroded from the inside and “corruption in Indonesia is getting worse”.

He takes aim at Joko, also known as Jokowi, a political outsider who rose to the presidency in 2014 on a platform of liberal reform but whose commitment to fighting corruption has come under serious question.

“All facts show that President Jokowi does not make corruption eradication a priority in his second term of office because his main agenda is once again the economy, infrastructure development and investment including the relocation of the capital city,” he said. (Joko has vowed to move the capital from Jakarta to a city to be developed on the island of Borneo.)

Analysts cite the decline of the country’s anti-corruption apparatus as symptomatic of a general democratic regression during Joko’s seven years in the presidential palace.

Max Lane, a visiting senior fellow with the ISEAS-Yusof Ishak Institute in Indonesia, argues it is reflective of continuing stagnation, which was a key takeaway of the two terms of Joko’s predecessor, Susilo Bambang Yudhoyono, according to critics.

He directs blame not at the current President specifically but the political landscape in Jakarta.

“You’ve just got two parties outside the government now and they’re not opposition parties because they mostly vote with the government. It’s almost an all-party government,” Lane said.

“I think that the real challenge for Indonesia on the corruption issue is for a revival of a political situation where there’s some political alternatives being offered in the electoral scene.

“Without that some of these institutions will steadily weaken.” 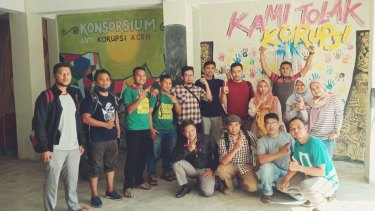 The current student cohort at the SAKA anti-corruption school in Banda Aceh, Indonesia.

Lane believes the key blow to the nation’s corruption fighting capacity was not the amendment of the KPK legislation itself, but the message sent by the almost unanimous support of it in Parliament and Joko’s the backing of it.

The protests that followed the law change, with tens of thousands taking to the streets, have done little to arrest the slide in the two years that have followed.

Back in Aceh, the SAKA anti-corruption school has faced its own challenges during the coronavirus pandemic, as it was forced to teach online only.

But school principal Mahmuddin hopes it can keep doing its part, however small, in tackling the more long-standing epidemic in Indonesia.

“We need young people to continue voicing [the] anti-corruption spirit,” he said.

“Some of our alumni now work for the police, the Prosecutors’ Office. One just passed exams at the Supreme Court and another is at the Foreign Ministry.”

“We told them that we cannot change people, but we can at least start with ourselves.”