TWO students died on Sunday after a boat carrying five members of the Iowa State University crew club capsized on a lake during practise.

The tragic incident occurred as the group were practising on Little Wall Lake, south of Jewell, at 9.30am yesterday, the university said in a press release.

Three of the students were rescued, treated and released from Mary Greeley Medical Center on Sunday, ISU said.

The body of one student, who has not yet been named, was pulled from the icy waters by a dive team later the same day.

Hamilton County rescuers searched for the missing fifth student until nightfall, before suspending the hunt until Monday morning.

In a press conference held earlier today, Hamilton County Sheriff Doug Timmons announced that tragically the body of the second student was recovered, marking the second fatality from the incident.

Members of the Ventura Fire Department used advanced sonar imaging to find the second body just after 9:45am, Timmons said.

The Iowa Department of Natural Resources then made the identification of the missing student around 15 minutes later.

The sheriff's office is withholding the names of the deceased "out of respect for the students involved" until their families can be properly notified.

The three survivors of the incident were rescued with the help of some heroic bystanders, the sheriff said.

"We've also had several heroes that live in the buildings out here, came out and help the individuals," Timmons said.

"There were some people who took some risks that they didn't have to take to save some lives … This could have been a lot worse than it's going to be."

What caused the boat to capsize remains under investigation, but there were high winds at the time authorities were called, Des Monies Register reported.

The wind was blowing about 20 to 25 mph from the northwest when the crew team was on the lake; the temperature was around 37 degrees.

Roger Fritz, the former mayor of Roland who lives near the lake, described the conditions on the water as "pretty rough".

A 249-acre lake formed by glaciers, Little Wall has a maximum depth of 13.2 feet, according to the Iowa Department of Natural Resources. In most places it is between six to nine feet deep.

"I’m guessing they probably got swamped in some heavier waves," Fritz told the Register. "Those crew boats are really shallow.”

Until about three weeks ago the lake was completely frozen, Fritz added.

According to ISU's crew club's website, the team regularly practices on Little Wall. 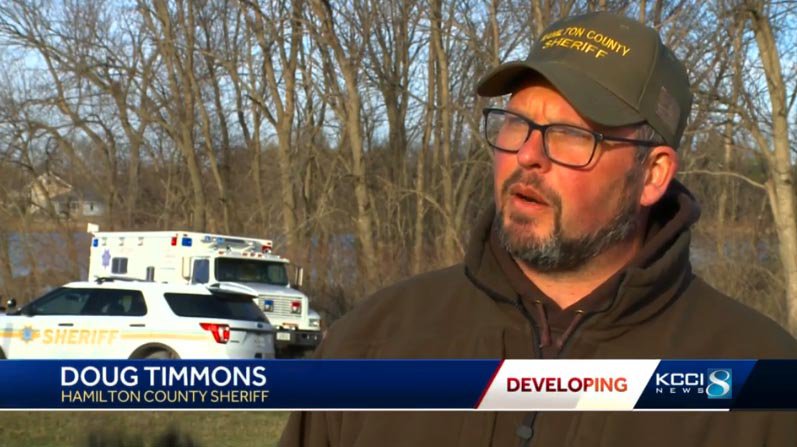 In a statement, Iowa State President Wendy Wintersteen said the school and wider community was "heartbroken" over Sunday's tragedy.

"The Iowa State community is heartbroken to learn of this tragic accident at Little Wall Lake. At this time, we are focused on providing support to club members, their families and friends.

"We ask that everyone keep them in their thoughts during this very difficult time," she said.

In an updated statement issued Monday, the school said no additional details will be shared until an internal review of policies and procedures related to this incident is completed – which could take several weeks.

"Law enforcement agencies are still working to notify family of the students involved in the accident. Names will be released once that process is complete," a statement read.

Senior Vice President for Student Affairs Toyia Younger on Monday extended her "deepest condolences to the families and friends of the two students we lost on Sunday."

"During this time of grief, I ask the entire Iowa State community to show compassion and support for one another. We know there are a lot of questions and we are working to provide answers, but this will take time," Younger wrote.

"The Student Affairs team is providing ongoing outreach to comfort and support those students involved in the accident, other members of the Iowa State Crew Club, their families and friends. We ask that you respect their privacy during this difficult time."

United States Rowing Association CEO Amanda Kraus also released a statement Monday morning, saying, "Our hearts go out to the families, team members, classmates, and friends of the Iowa State rowing team during this very sad and tragic time and we ask that everyone keep them in our thoughts."