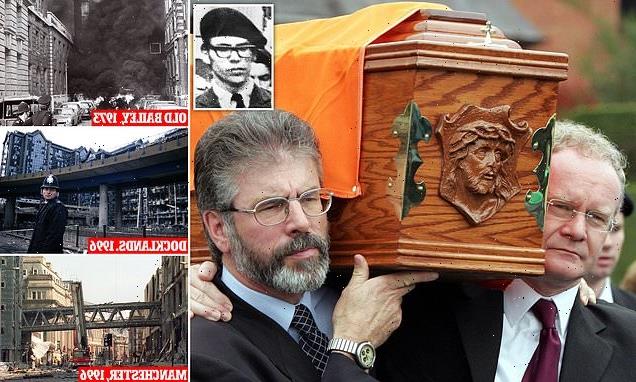 Gerry Adams is being sued in the High Court for his alleged role in masterminding three IRA bombings, The Mail on Sunday can reveal.

Three victims of the 1996 terror attacks in Manchester and Docklands and the Old Bailey car bombing in 1973 are seeking nominal damages of £1 in a landmark case that could see long-standing accusations against Mr Adams tested in court for the first time.

The former Sinn Fein leader, 73, has always denied membership of the IRA or any involvement in its terror campaign in Northern Ireland and on the mainland.

Yesterday, a spokesman for Mr Adams said: ‘Mr Adams rejects the claims made in the notice of legal action. His solicitor will deal with it.’

In 2014 he was questioned for four days by police investigating the murder of Jean McConville, a 37-year-old widow and mother of ten who was abducted from her Belfast home in 1972, shot and secretly buried. Mr Adams was released without charge. Twice in the 1970s he was held on suspicion of IRA membership but has never been prosecuted.

Last week, lawyers acting for victims served him with notice of the High Court claim. The claimants are fighting, as they see it, to bring Mr Adams to justice and will accuse him of being one of the guiding minds behind the IRA’s bombing campaign. 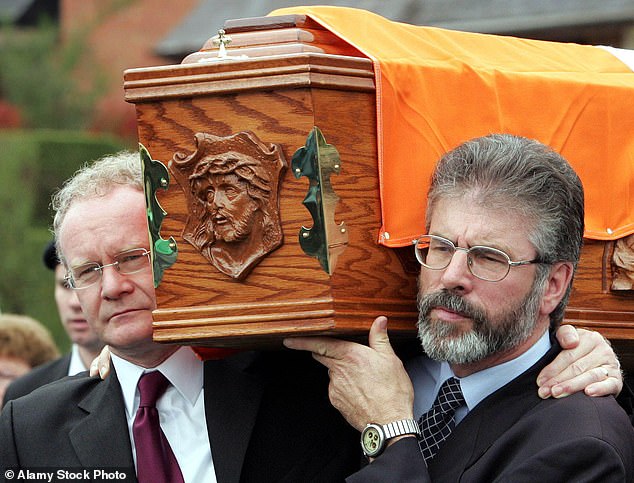 STAUNCH REPUBLICAN: Adams, right, carrying the coffin of a former IRA chief of staff with Martin McGuinness in Belfast, in July 2004

Jon Ganesh, a security guard injured in the 1996 Docklands attack, told The Mail on Sunday: ‘We have to make a stand and get justice for the victims. Not just my friends who died at Canary Wharf, or the three of us, but all victims of the IRA’s despicable campaign.

‘It’s not about any money, which is why we’re only claiming for £1 – it’s about the principle. It’s a historic moment. And Gerry Adams will have a chance to defend himself in court and answer the allegations.’

The other claimants bringing the extraordinary legal case against Mr Adams are Barry Laycock, a rail worker injured by the 3,300 lb truck bomb detonated in Manchester in June 1996. It had three times’ the explosive power of the Canary Wharf bomb, injured more than 250 people and caused £700 million worth of damage. The third claimant, John Clark, a former police officer, was injured in the Old Bailey bombing operation that launched the IRA’s mainland campaign. A 60-year-old man died and more than 200 people were injured.

Both the Manchester and Docklands attacks were carried out by the IRA’s South Armagh Brigade on the orders of the group’s central army council. In 1997 an SAS unit captured an IRA sniper team in South Armagh that included James McArdle. His thumbprints matched those the Docklands bomb investigators obtained and he was found to have driven the truck bomb from Northern Ireland to London. In 1998 McArdle was jailed for 25 years over the attacks, as well as given 50 years for his role as an IRA sniper, but was released in 2000 under the the Good Friday Agreement. 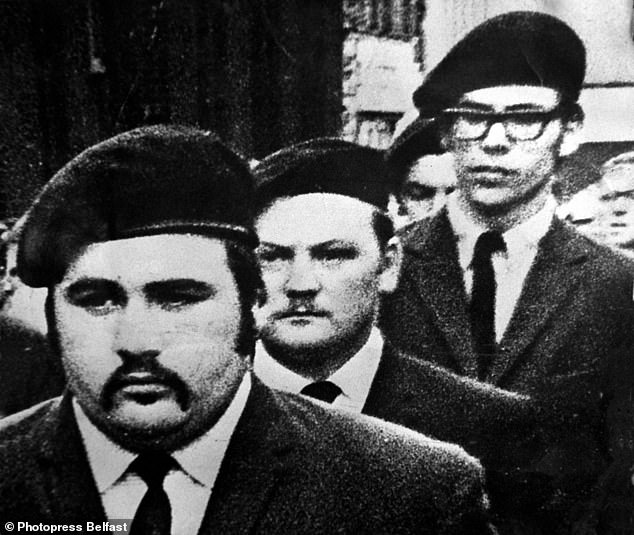 Gerry Adams is pictured, right, an IRA funeral of an IRA commander in 1971, marching in a ‘Guard of Honour’

Mr Adams has repeatedly denied accusations that from the 1970s he was a senior member of the IRA and part of its army council until the 2000s. He served as president of Sinn Fein from 1983, when he was also the MP for Belfast West but did not sit in the House of Commons due to his party’s boycott.

The claimants’ lawyers have three months to serve the evidence behind their claim before a High Court judge rules on the case.

Their work will involve painstaking research, including the examination of thousands of documents.

It is being funded through CrowdJustice, an online fundraising platform specifically designed for legal action, and are campaigning to raise an initial £100,000 from the public. Law firm McCue Jury & Partners, who are representing the three claimants, successfully sued IRA man John Downey in 2019 over his role in the Hyde Park bomb attack in 1982 which left 11 military personnel dead.

They also successfully sued four men over the 1998 Omagh bombing, two of whom were later retried and found responsible for the attack that killed 29. Matthew Jury, of McCue Jury & Partners, said: ‘All the claimants are seeking is the truth, for them and on behalf of all the IRA’s victims. It’s an opportunity for Mr Adams to give his full and honest account of his part in The Troubles. If not, then it will be for the court to decide what role he played.’

Gerry Adams: A pallbearer to an era of hatred and bloodshed that is now thankfully dead and buried

By Ian Gallagher and Jake Ryan

While on the run from the law in 1972, a then clean-shaven Gerry Adams grew a beard as a disguise.

In the event it didn’t help much as Mr Adams, 23 at the time and suspected of being an IRA commander, was soon arrested and interned without trial.

But evidently he was rather taken with it, because by the time he entered politics some years later, convinced that Irish independence could not be won by armed struggle alone, the whiskers had become a permanent fixture – his signature, in fact, along with heavy black-framed spectacles.

It was the beginning of a personal transformation that would later become key to peace in Northern Ireland.

In 1983 Mr Adams was elected president of Sinn Fein, the IRA’s political wing, and a member of the British Parliament, and as befitting a politician, he swapped the Aran sweater of the Belfast revolutionary for a suit and tie.

Escaping his past, though, has not proved nearly as simple as altering his appearance.

Ever since The Troubles began in the late 1960s, Mr Adams has been unable to shake the allegation that he was a member of the IRA. Indeed, not just a member, but its Chief of Staff and mastermind of some of the worst violence seen in Belfast during the 1970s.

He appeared at IRA funerals in a black beret and once wrote a pseudonymous piece for the Sinn Fein newspaper, An Phoblacht, that proclaimed: ‘Rightly or wrongly, I am an IRA volunteer.’ The article also defended violence as a tactic.

Once, at a 1995 rally outside Belfast City Hall, a man shouted, ‘Bring back the IRA!’ Grinning, Mr Adams replied: ‘They haven’t gone away, you know.’

THE THREE ATROCITIES IN LANDMARK CASE 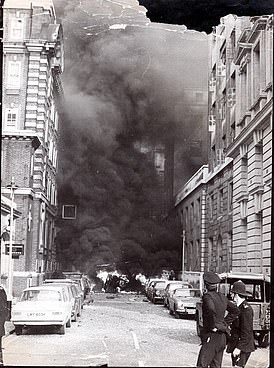 Having decided to mount attacks on the mainland, the IRA detonates two devices in London on March 8, one outside the Central Criminal Court – the Old Bailey – and the other close to the Ministry of Agriculture near Whitehall.

One man dies of a heart attack and more than 200 are injured, including police officer John Clark.

He is left with shrapnel lodged in his bones when the bomb detonates ten minutes earlier than the time given in an earlier IRA telephone warning. 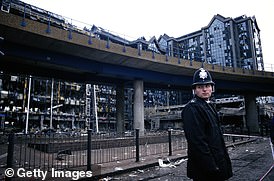 A 17-month ceasefire comes to a bloody end on Friday, February 9, when the IRA carry out a truck bomb attack at South Quay.

Security guard Jon Ganesh, a friend of the two murdered men, is thrown across the road by the force of the explosion as more than 100 people are injured.

As the IRA steps up its campaign, another truck bomb is parked in Manchester’s busy shopping district on Saturday, June 15.

The bomb – reportedly the biggest detonated in Britain since the Second World War – explodes at 11.17am, creating a 1,000ft cloud of smoke and causing around £700million worth of damage.

More than 250 people are injured, including rail worker Barry Laycock.

Despite all this, whenever the issue surfaces the wily republican swats it away. Typical was this response from 2013: ‘I’m very, very clear about my denial of IRA membership. But I don’t disassociate myself from the IRA.’

By contrast, the late Martin McGuinness, who was Mr Adams’s friend and fellow Sinn Fein veteran, freely admitted to being a former IRA commander.

Mr Adams was arrested several times, but has never gone on trial.

In 1978 he was charged with IRA membership, having been detained the day after the IRA killed 12 Protestants in a hotel bomb attack outside Belfast. But the Lord Chief Justice of Northern Ireland ruled there was insufficient evidence to merit a trial.

In 2014 Mr Adams was arrested and held for four days over the IRA murder of Jean McConville, a 37-year-old widow and mother-of-ten who was abducted from her Belfast home in 1972, shot and secretly buried. Her body was found on a beach in County Louth in 2003. Again he was released without charge.

If the civil case revealed today by The Mail on Sunday goes before a judge, it will be the first time the central allegation of IRA membership against Mr Adams has been tested by a court of law.

Not that it will lead to his incarceration. But those bringing the action – victims of IRA attacks – will see it as a justice of sorts. The eldest of ten children, Mr Adams came from a staunchly republican family in the Falls Road of Belfast.

His father, Gerry Adams Sr, was an IRA man, wounded by the RUC in 1942 and sentenced to eight years in prison for attempted murder.

According to his account, Mr Adams sold firewood on the streets to buy stale cakes from a local bakery and carried them home at dawn in a pillow slip. Aged 11 he announced that he wanted to be a monk, drawing a scathing response from his father: ‘What use is it to be a Christian brother and fade into oblivion?’

By the age of 16 he was a member of Sinn Fein and destined for a life in the spotlight. He attributes his political awakening to an incident he witnessed in which an Irish tricolour was torn down by police, prompting a riot that lasted four days.

Brendan Hughes, a former IRA Belfast Brigade commander, was once Mr Adams’s best friend. ‘I loved him. I’d have taken a bullet for Gerry,’ he said, sickened by what he perceived as hypocrisy and Mr Adams’s insistence he had never even been in the IRA.

Mr Hughes died six years ago, but in a taped interview with oral history researchers from Boston College, he disputed Adams’s narrative. ‘I never carried out a major operation without the OK or the order from Gerry,’ he alleged, though all his claims have been consistently denied by Mr Adams and have never been conclusively proved.

But Mr Hughes’s claims have been supported by Dolours Price who, along with her sister Marian, bombed the Old Bailey in 1973.

Price died in 2013 but in a taped interview before her death she admitted to driving Jean McConville from Belfast to her fate across the Irish border and alleged that she took her orders from Gerry Adams.

Four years ago, when he stepped down as Sinn Fein president, Mr Adams said he did not care how history judges him.

Reflecting upon the thousands of people killed and injured in The Troubles, he said: ‘I regret the fact anyone was killed, particularly those who were killed by the IRA. Of course I do. All victims deserve truth and justice and their families deserve that.

‘People will judge me whatever way they want to judge me, and I accept that.’